The Miracle (of Jeff Francoeur) 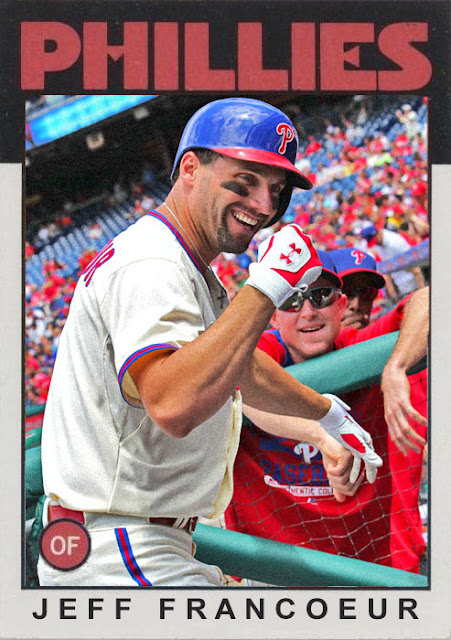 When you go to see a team that's basically the worst in the NL play a team that people are saying is one false Yankee move away from playoff berth, you don't expect walking away with a win. I mean, I certainly didn't. Very first play of the game- Troy Tulowitzki hit a bomb to right, the cut-off man overshoots the first baseman, barely keeping Tulo at first.

I turned to the crowd and said "your 2015 Philadelphia Phillies, everyone."

However, that, plus giving up a few runs here and there, was the extent of the Phillies' ineptitude during their 7-4 win over the Blue Jays. Because the very first inning they chased Mark Buehrle and had three runs driven in by a succession of batters, including Darin Ruf and Aaron Altherr.

That was the thing about this game. Jeff Francoeur and Odubel Herrera were the only really starters playing tonight, Galvis aside. People like Cesar Hernandez, Andres Blanco, Cameron Rupp and the aforementioned Ruf were playing tonight, and they all did a commendable job, save for Hernandez. Altherr was in charge of hitting in a huge home run later in the game, as well as having a great game in terms of hits. This was a guy who hadn't made a ton of damage as a rookie this year, and he made a case for legitimacy in Citizens Bank Park.

Jeff Francoeur, as usual, was the real hero. In the third, with two outs, he hit a solo shot that lengthened the lead, and made the case for Frenchy to stay a Phillie a little bit longer. This guy has been keeping the team fresh this year, as well as being one of the few fun players left on the squad.

Mark Buehrle was chased off the mound early. Josh Donaldson didn't do much. The only home run came from Edwin Encarnacion. the red-hot Blue Jays were deemed cold by the Phillies of all people. And it was nice to see Ken Giles shut them down one by one in the ninth, securing the win, and making this game one that I unexpectedly enjoyed.

It helps the Yankees too, giving them another game up in the standings. Always helps.

So that was my Phillies game, my first in a few years. Can't say enough good things about the stadium, and while the team isn't great, they made it a point to drive in a win for me. Can't ask for more than that.
Posted by Jordan at 11:18 PM