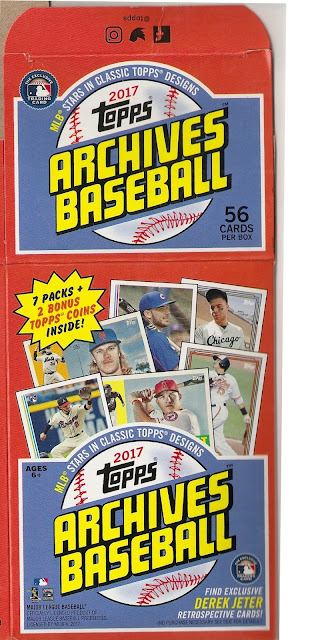 Yesterday you saw to rack packs. They were nice. Today, you get to see what the blaster looked like. It's also nice.

TWO OF THESE SUCKERS!

Yeah, each box comes with two newly minted Coins, obviously based on the old coin designs of yore. This pack gave me...

These two! Bregman is a nice pull, though it'd be nicer if he was having a better season. Donaldson is always a nice pull. I think Bregman's is cooler, though, thanks to the purple sky. 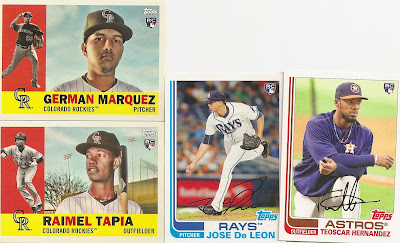 Pack 1-
A gaggle of rookies who aren't doing much so far this year. Hernandez is a dupe from the rack packs.

These three are pretty nice, though they've played for my team and only one's in said uniform. Reggie as an Oriole is a FANTASTIC SIGHT to see, and one that looks great in this static shot. Bunning and Roberts are great additions here, especially considering Bunning's recent passing. 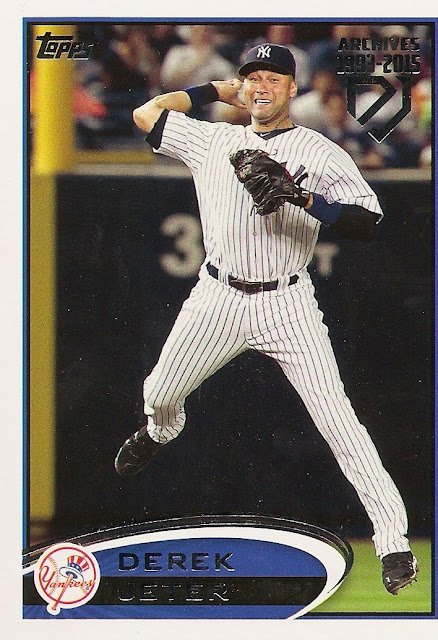 This is a Jeter Archives insert, rolling back all of his Topps issues with a little emblem. This is a nice one, though I would have preferred an earlier issue. 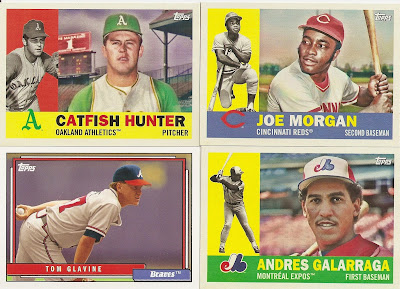 Pack 2-
Four sideways brilliant ones. Nice of them to include Galarraga and Hunter. Also, that Glavine one is so nice, it could have gone with the set. 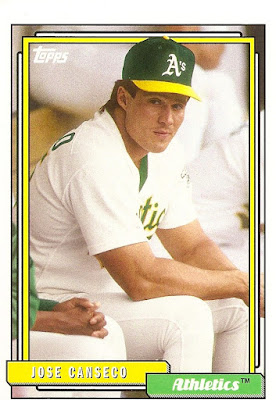 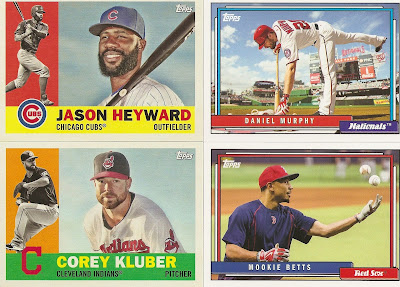 Pack 3- Sideways shots. Topps could have easily saved those Murphy and Betts shots for Stadium Club, but they work so well in 1992 Topps that I'm glad they didn't. That Murph might be one of the cards of the year. 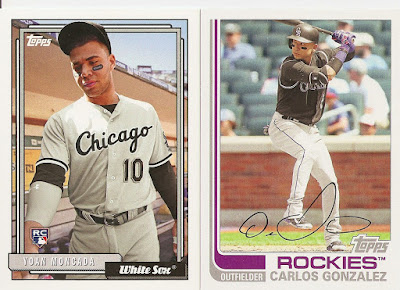 One of the top rookies in the set showed up in this pack, in a pretty nice 92, as well as a nice enough 82 of CarGo.
Dupes in this pack- Jake Odorizzi, Jackie Bradley

Pack 4-
Injuries and dead arms. The Adam Eaton is a truly terrible airbrush job, as someone practically pasted a Nationals helmet on Eaton. 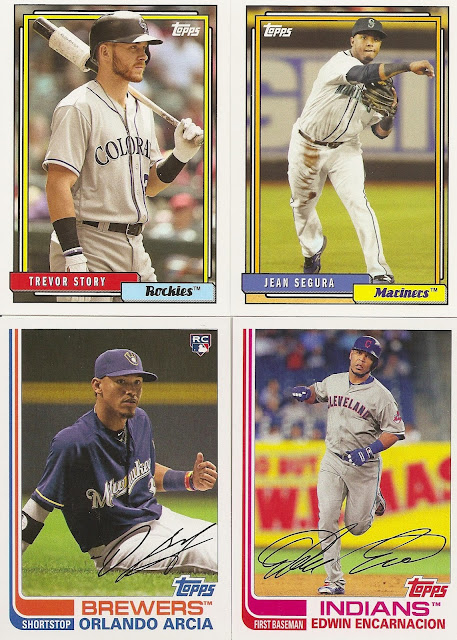 Middle infielders past and present. Story's is my favorite shot of the pack, even if he's having the word season out of everyone. Edwin's is photo sopped, as his armbands are still very blue. 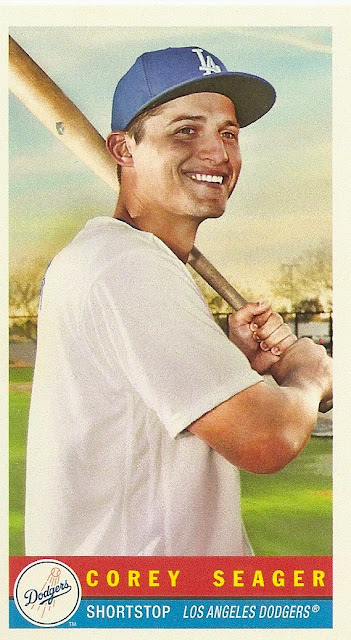 Another really cool 59 Bazooka insert, this one of Corey Seager, a much more likable ballplayer. 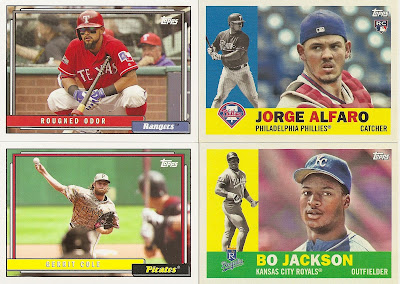 Pack 5- Odor's card is a truly nice one. Alfaro gets an Archives issue despite a less than favorable debut last year. Always love pulling Bo Jackson cards. Gerrit Cole's a great pitcher, but needs to get his control back.

Koufax and Rizzo are never not a good pull. Roman Quinn is yet another Phillies prospect, though this one hasn't done a great deal for us this year. 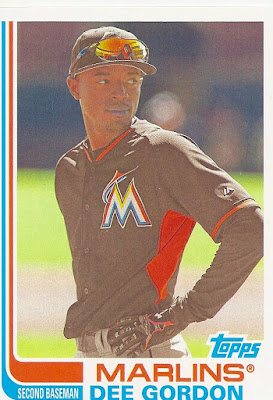 Don't adjust the settings- this Dee Gordon is a 1982-blackless parallel, which is one-per-blaster essentially. You can see it's less defined in the photo. Decent pull, especially for a box without a hit. 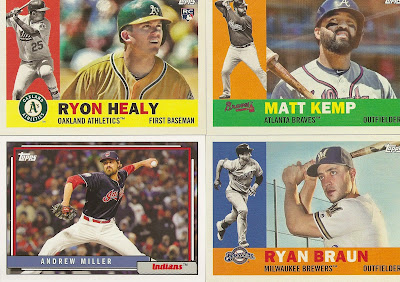 Pack 6- Miller's is a pretty great one, and I also dig Kemp's for being semi-action/semi-static. Same with Healy's. 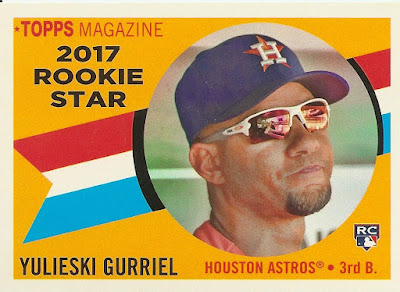 The '60 Rookies this pack was a Yulieski Gurriel, who's having a nice enough season, but not as nice as the rest of the Astros this year. 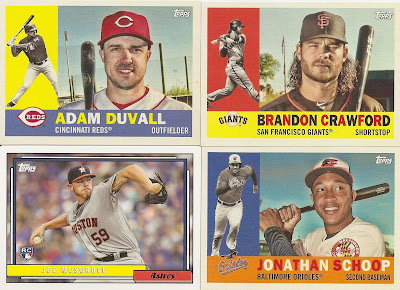 Pack 8- Musgrove's card is a pretty nice one, though I'm still kinda won over by the 60s as a whole. They do bring back memories of 2009 Heritage, but they're still great homages. 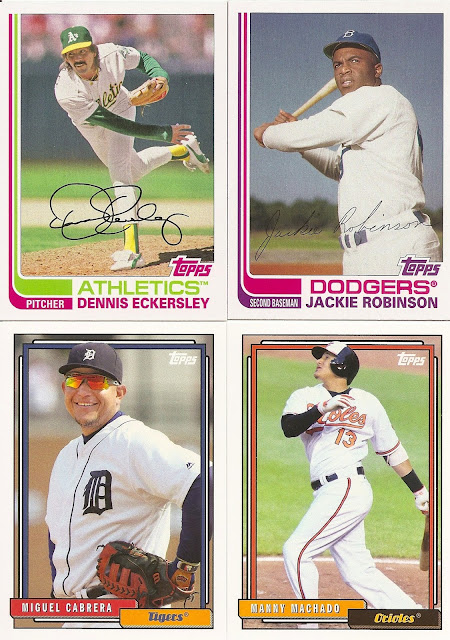 Two Hall of Famers on top, looking pretty nice. Two of the best players in baseball on the bottom. I'm guessing Miguel Cabrera will be joining those top two before the next decade is up.

So, that was a blaster full of Archives. I really like this set. If you do not like this set, and want to send some unneeded base cards my way, as i'm completing the set, you're more than welcome. Still, this was a pretty cool blaster, and a nice way to start the quest for this set.
Posted by Jordan at 3:26 PM