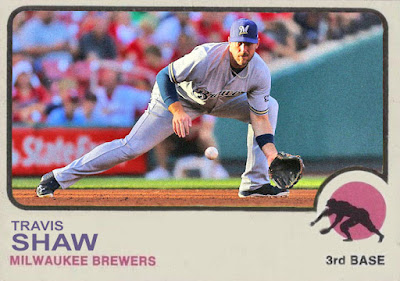 I feel like I've gone over this once before on the blog, but it bears repeating, especially underneath this truly great custom.

Travis Shaw was a backup utility infielder for Boston over the past two years. Eventually, as Brock Holt grew more consistent, the Sox figured out that they didn't really have a great deal left to do with him. So, this past year they traded him to the Milwaukee Brewers for reliever Tyler Thornburg.

So...let's see how the Sox have done since the trade.

Tyler Thornburg had season-ending surgery...before the season even began. So the guy they'd traded for wasn't going to be any use to them. However, third base, which had been a bit more of a foregone conclusion in March, became even worse for them.

Initially it was a two man race between Brock Holt and Pablo Sandoval. When Holt got injured, it was a foregone conclusion. When Sandoval got injured, people got scared. Now, the only third baseman left in Boston is Deven Marrero, who's hitting atrociously so far.

It's worth mentioning that an additional first baseman, Yoan Moncada, could have still been in their organization this year, but they traded him to Chicago...for someone they've certainly been using well this year.

So, Travis Shaw ends up in Milwaukee because his team doesn't realize how badly they need him yet. So Shaw becomes the starting third baseman in Milwaukee, hitting extremely well, and becoming a leader-by-example for all the young rookies and prospects who don't wanna take any advice from Ryan Braun. Right now he's one of the best hitters on the team, hitting more for average than people like Eric Thames.

The Brewers are still the inexplicable surprise team of the year, and I hope they, and Travis Shaw, keep it up.

Coming Tomorrow- The guy who might have the coolest Topps flagship card of the year.
Posted by Jordan at 9:45 PM
Labels: Brewers, Custom Cards, irony, mwahahaha, Red Sox, Travis Shaw