I used to have a problem with my local Target where they'd never have products on the day of their release, and just casually slide them in a week later, unsuspectingly. They'd been fine recently...but today, I go over to snag some 2017 Archives, and they have nothing.

They did, however, have a ton of Topps Bunt. I was skeptical, as while bloggers everywhere have been championing this set as a success, I did have a bad history with the Bunt app, and the fact that these cards were glorified, glossier versions of the stuff on the app scared me a bit. But at a cheap price, I couldn't refuse. 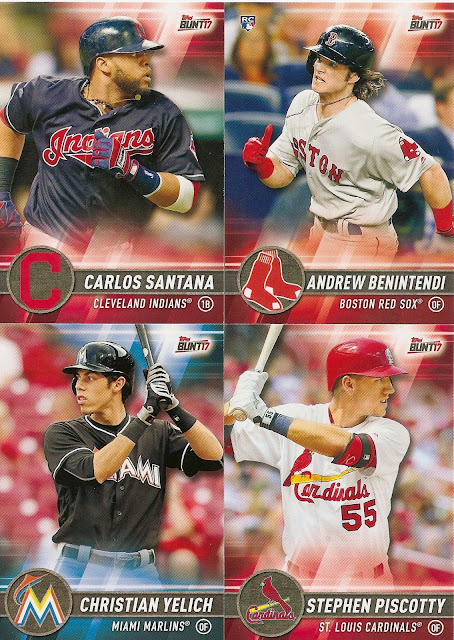 Pack 1-
These are your base cards. They're semi-color coordinated, the photos are zoomed in, and the players are lifted in shadow off from the background. It's shockingly simple, almost insultingly so. Yes, I know you guys like this, but it's a bit too accessible for my tastes, even if it, yes, IS meant to be marketed towards 'the children'.

Good news is this pack gets me my first of MANY, I'm assuming, Chris Sale as a Red Sock cards,  a Kris Bryant INFINITE insert, which looks like the poster for a D-rate action movie, and our one-per-pack blue parallel of Brian Dozier. 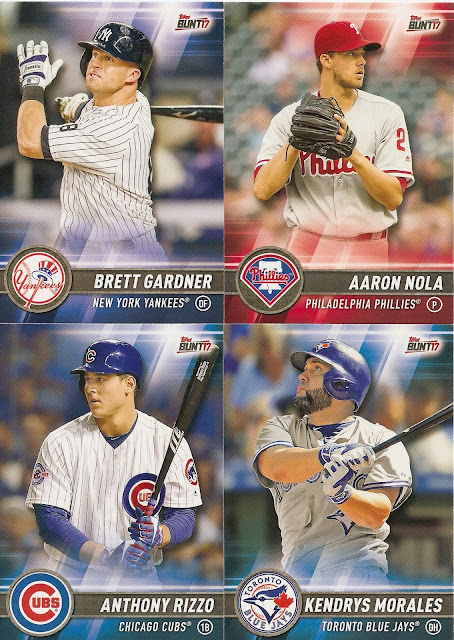 Pack 2- Morales notwithstanding, a much friendlier batch of base cards. Gardy and Nola are so far impressing for my respective teams, and Rizzo's hitting his usual amount of home runs. 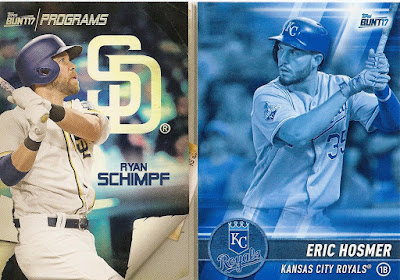 Ryan Schimpf's is a Programs inserts. Not as cool as last year's version, but still amusing enough. Hosmer's card proves that these blue parallels work so much better when corresponding with a blue-friendly team like the Royals. 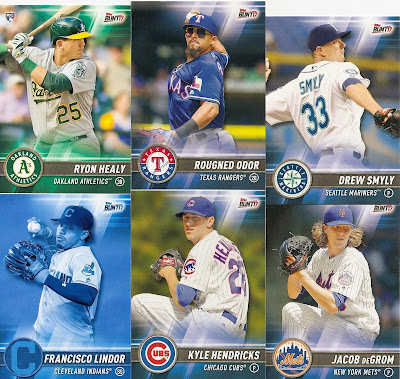 Pack 3- An amusing glut of base cards. Top row is AL West, bottom row have some sort of batting/pitching leadership thing from the last few years. 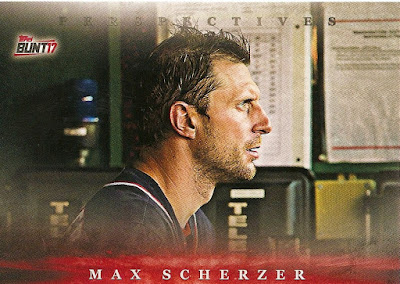 Perspectives, as an insert set, works a ton better than Infinite because it focuses on a moment in time, rather than just a filtered photo. You can see what's going through Max Scherzer's head because you can tell where he is.

Pack 4- Top row is East standouts, including an inclusion for Jorge Alfaro, who had a very poor debut last year. Middle row is west standouts. Bottom row is Mariners hitters. 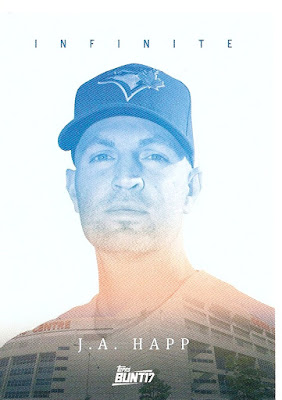 I'm glad that J.A. Happ is getting inserts in Topps products, but...this is still not a great one. Too much empty space. 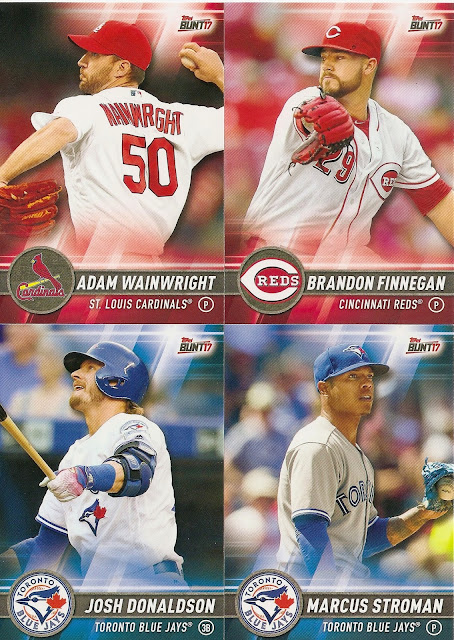 Pack 5-
Things that piss me off- Cardinals, Decent Pitchers that get injured, Blue Jays. 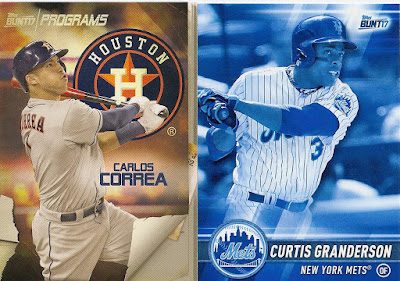 At least these things make me happy- the Programs inserts are still pretty cool, and I still won't ever say no to a new Curtis Granderson card. 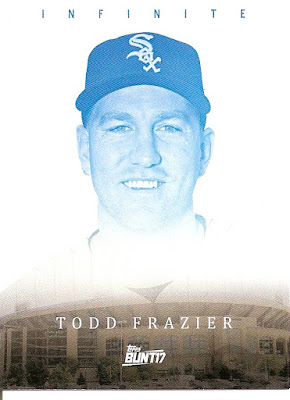 Another Infinite insert, this one of Todd Frazier, who's having an infinitely terrible 2017 season. 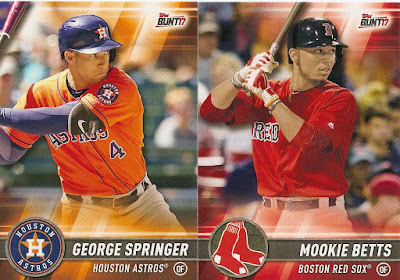 Pack 7-
Two guys having fantastic 2017 seasons already. Hope they both keep it up. 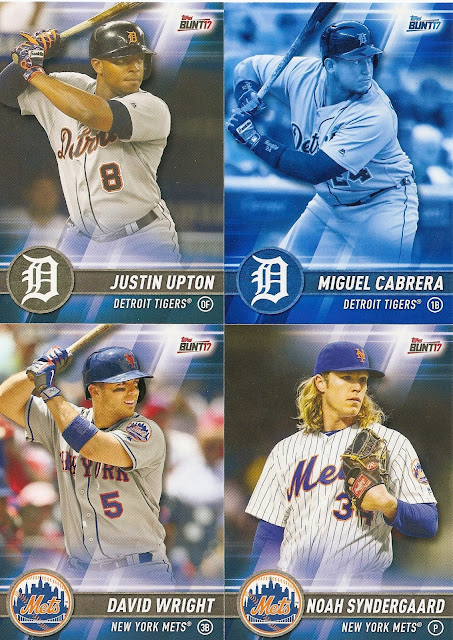 I managed to get back-to-back Tigers, then back-to-back Mets. Thankfully they're all team legends and guys I collect. 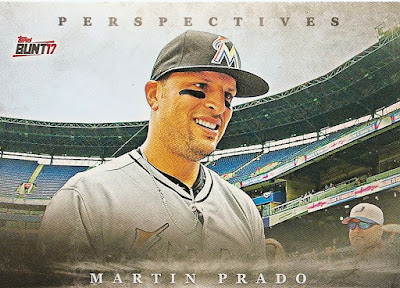 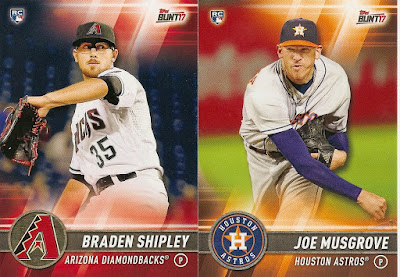 Pack 8- Rookies! Shipley hasn't done much. Musgrove was having a nice rookie year until an injury sidelined him.

A trio of middle-of-the-road players, though Segura's having a nice season, and Martinez certainly knows how to stoke someone out...or walk them, honestly. 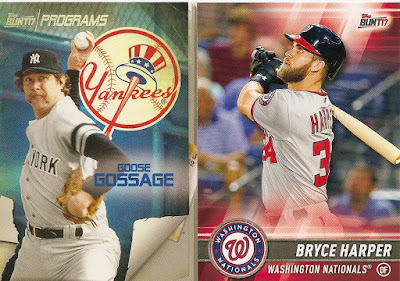 Highlights- A Programs insert of Goose Gossage in a Yankee uniform, and a base card of Bryce 'Aimless Helmet Throw' Harper. 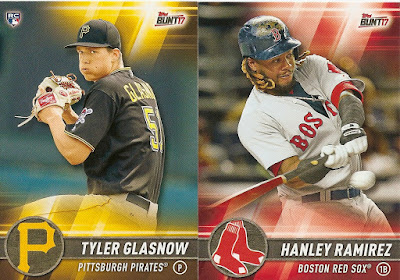 Pack 9- A rookie that still hasn't found his control, and a Red Sox DH who's still doing pretty well. 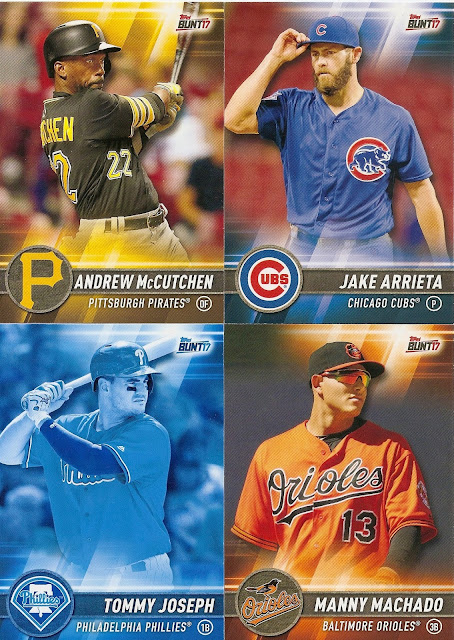 Four favorites of mine, none of which are having particularly great seasons. Machado's probably doing the best of them all, and Joseph's doing more with his sophomore season. Still can't pass up a Cutch though. 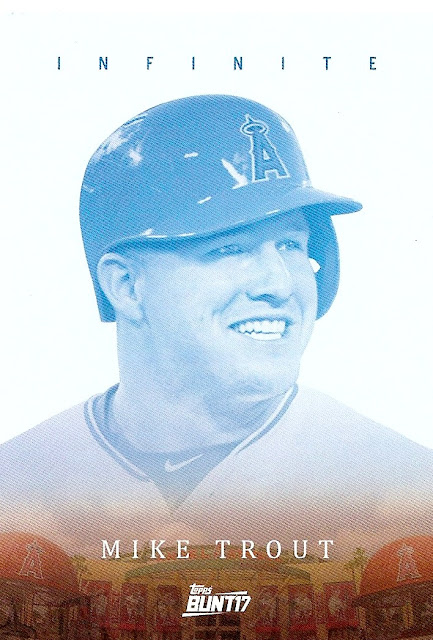 And, as an added bonus, an insert of Mike Trout. For LA's sake, and for baseball's sake, I hope he recovers soon. 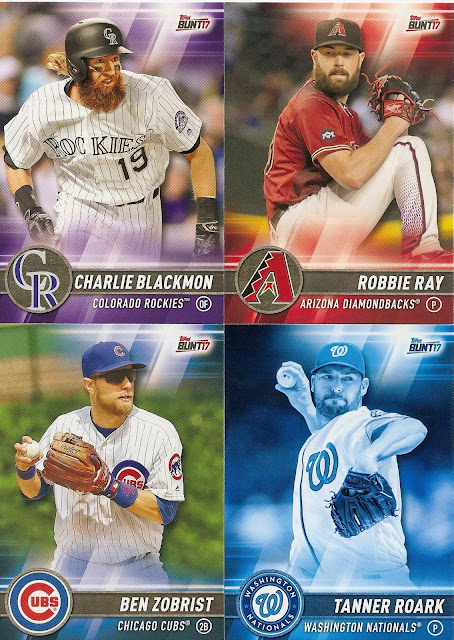 Pack 10- This pack started out with four men with beards. Which is always a nice way to start a pack. A shame Dallas Keuchel and Brian Wilson missed out on this one... 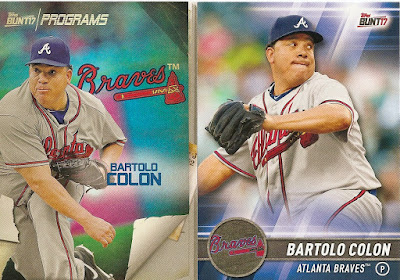 This pack ended up being a BARTOLO COLON HOT PACK! WOOOOOO!
I get the Programs insert, AND the base card, both my first for Colon as a Brave. Man, it's a good thing I've grown an appreciation for this guy, or else I'd just be giving Topps a weird look.

Pack 11- This one started innocently enough, with three power hitters. So far, I'd say Ozuna's having the best season of the three. 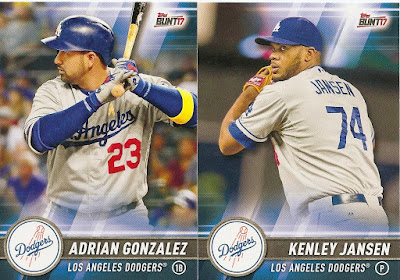 Two strong-as-hell Dodgers also wound up in this one. Also, neither one is currently on the DL. 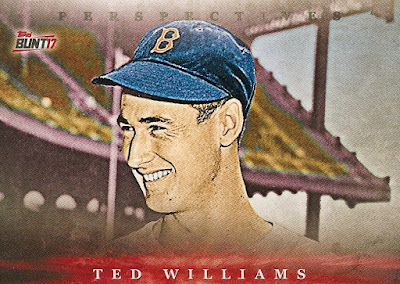 We also ended up with one more Perspectives insert, this one a really nice one of a very young Ted Williams.

However...there was still one card left in the pack...and oh my gosh was it a nice one.. 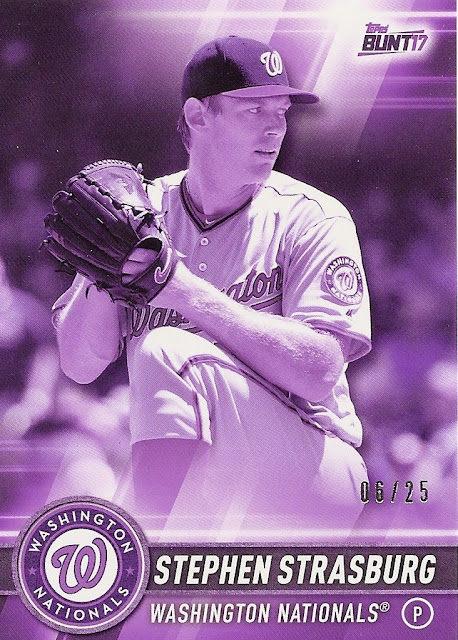 This is a purple base parallel of Stephen Strasburg. These fall one in every 125 packs. And they're numbered to 25.

So...I got an incredibly low numbered card of one of the best pitchers in baseball.

Even if I wasn't exactly won over with Bunt, at least nowhere near as much as everyone else, I still couldn't stay mad at a box that had yielded a really nice numbered parallel of Stephen Strasburg, which is as nice of a pull as it was in 2010.