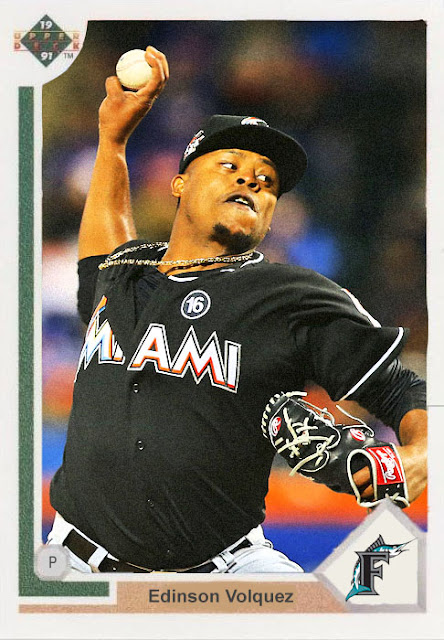 I think that nobody, aside from Bartolo Colon, has had a stranger career than Edinson Volquez. Just when you think he's done being relevant, he spins back into the fold.

The guy has the distinction of being traded for an MVP back in 2007, when the Reds grabbed him in exchange for some has-been named Josh Hamilton. He has an unbelievable season in 2008, then just sinks into obscurity for 6 seasons. Then he comes back in 2014 because the Pirates make a run at the playoffs, and he does a fair job, then he hands in Kansas City and wins a World Series...followed by another 'back into the gutter' season that lands him in Miami.

I was not expecting a no-hitter to be the next thing I heard about Edinson Volquez. I was kinda figuring they'd DFA him by June, and here he is, leading the team and posting a pretty nice record, despite playing for a lackluster team, with a 'Me and Dan Straily vs. the world' rotation configuration. Heck, he even managed to no-hit the Diamondbacks, who've built up a ton of momentum recently.

I honestly don't know what's next for Volquez. I know that Stanton and Ozuna are trying to jump the team back into the race, but I don't know how successful that'll be.

Coming Tonight: He's gotten MVP votes in every year of his career, and he's 49 home runs away from the big 5-0-0. You can honestly just give him his plaque in Cooperstown NOW if you want.
Posted by Jordan at 9:04 AM