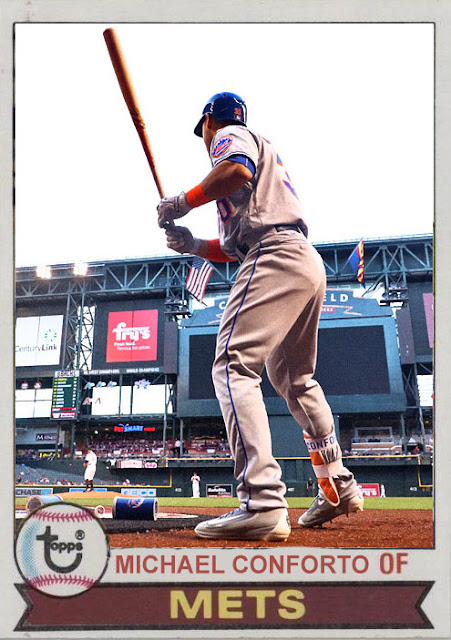 The Mets, as they are currently a team in the NL East that is not the Washington Nationals, are doing poorly. Yes, they are in second place, but they're ten games behind the Nats, and a game ahead of their closest competitor, the Atlanta Braves at third. When your biggest rival for a division spot is the Braves...you're not doing too great.

The Mets are dealing with the fatigue of a roster trying to be great again. The pitching is struggling because guys are getting injured again, and the guys that are coming in that aren't Harvey, Wheeler or DeGrom aren't especially up to the task. The lineup's full of guys that are striking out too much. There are some standouts trying to swoop in and save the team, but for the post part it's relatively futile.

Getting lost in the shuffle is Michael Conforto's improved sophomore performance. He had an unfinished rookie season last year, sidelined halfway through thanks to some June strikeouts. Right now he's on an impressive track, and he's leading the team in AVG and home runs. Yes, there are some nice performances from Jay Bruce and Neil Walker hiding, but Conforto's is the most evident, because it's a career-defining year from someone who needed to define himself, as well as defining the team in David Wright's absence.

The Mets need as much good news as they can take, and Michael Conforto's 2017 season so far is very, very good news.

Coming Tonight: One of the few German-born MLB players in the major leagues, and one of the best.
Posted by Jordan at 10:43 AM
Labels: Custom Cards, Mets, Michael Conforto