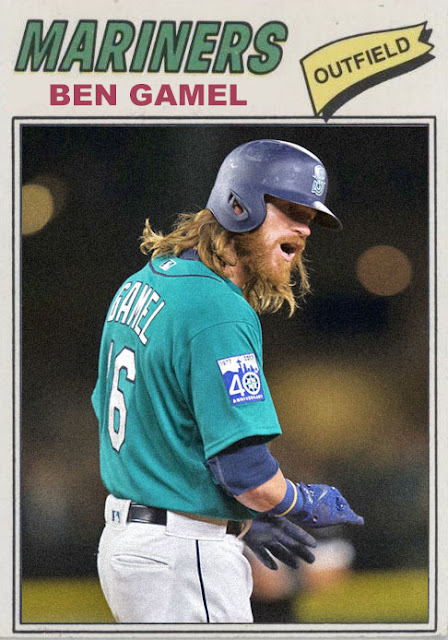 Sorry about the slight hiatus, everybody! The board of my laptop broke, so I had to spend the week trying to fix, and then replacing, said laptop. Additionally, I started a really cool summer job, so a lot of my day-posting has been near-nonexistent. Luckily I'm taking a moment now and posting a custom I should have posted 3 days ago.

Anyway, where were we? Ah, yes, Ben Gamel and the Mariners. Lovely.

The M's are 'round fourth in a division whose outcome is almost inevitable by mid-June. Yes, the Astros are still very much ahead of the game, and yes, anybody else in the division at this point is basically just an also-ran, but the M's have a nice amount of guys who are actually playing well. Ben  Gamel, who they snatched from the Bronx for literally nothing, is one of the best rookie performers on the team. Guillermo Heredia's never had a starting gig before and he's thriving. Mitch Haniger had an amazing start, Jarrod Dyson, Jean Segura and Danny Valencia are impressing in new uniforms, the one-two-three of Cano-Seager-Cruz is still potent, and James Paxton's still having one of the more impressive breakout seasons of anyone.

The problem, however...is injuries. Their entire starting rotation was felled with injuries at some point this year. King Felix and Hisashi Iwakuma bowed out early, Drew Smyly, as he seems to do lately, got injured, and the only guys left are inexperienced rookies, most of which (with the exception of Ariel Miranda) aren't doing great.

So, sort of like Cincinnati, this is a great team being ruined by a lack of starting pitching. And it's pretty sad, because you can see someone like Ben Gamel or Mitch Haniger leading this team to a postseason. The pitching just got very unlucky this year.

Coming Tomorrow- So, true story, for this team I literally had to go through everybody I hadn't customized yet that was doing relatively well, and I got literally no cool photos for anybody. So I had to settle on a guy who's likely gonna be their only All Star Game representative, a middle reliever and closer who'll likely be working in middle relief or closing for someone else in a month and a half's time.
Posted by Jordan at 8:41 PM
Labels: Ben Gamel, Custom Cards, Mariners