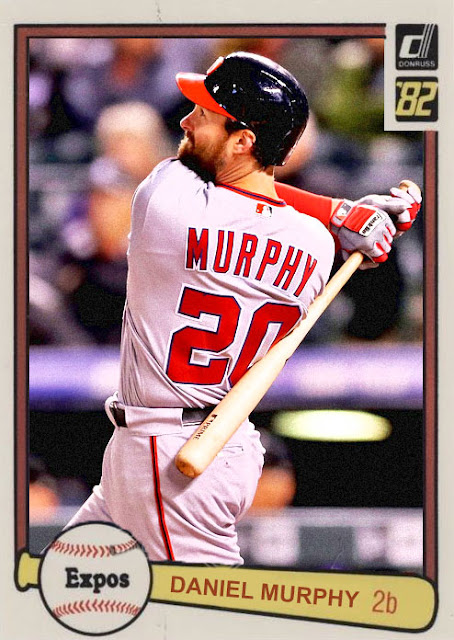 When Daniel Murphy had his amazing start to last year's season, posting an incredible average and hitting even better than he had for the Mets, the sportswriters were wondering when he'd come down. When the fluke would run out.

...It's a year later, and it's not a fluke. Murph is still one of the best offensive providers in Washington, regardless of his skills on defense. He's got a similarly high average to his 2016 season, and he's one of the MANY Nationals starters who are on fire right now. He, Anthony Rendon, Ryan Zimmerman and Trea Turner are all playing beautifully- wait, hell, that's the ENTIRE INFIELD. I used to go crazy about the original infield formation of LaRoche-Desmond-Rendon-Zim, but this is arguably even better. Here, there's not a strikeout-heavy guy in the infield, and everyone's going for average as well as power. Yes, the infield has a combined 43 home runs, but they're still hitting for average in addition to all of the power work.

Additionally, the core four of Scherzer-Strasburg-Gonzalez-Roark is deadlier than it's ever been. Scherzer's having a season that's already rivaling his Cy Young seasons, and Strasburg's back to his old strikeout-wielding tricks, with some better control and less earned runs. The only weak link in the rotation is Joe Ross, but when the fifth guy's the only problem, you're doing pretty well.

There are still some problems, though- Bryce Harper's the greatest, but the outfield without either Adam Eaton or Jayson Werth is pretty blank. The bullpen is ailing, as not only is the suggested closer Blake Treinen tanking, but Koda Glover, the new and improved closer, might be heading to the DL. They need to secure a closer, whether by converting some middle reliever or trading for one, insanely soon, or else the ninth inning instability is gonna KILL them come September.

Still, the Nationals, and Daniel Murphy, are impressing a ton of people so far. Let's hope it keeps going.