2021 All Star Game Rosters: One Side Clearly Prepared More Than the Other 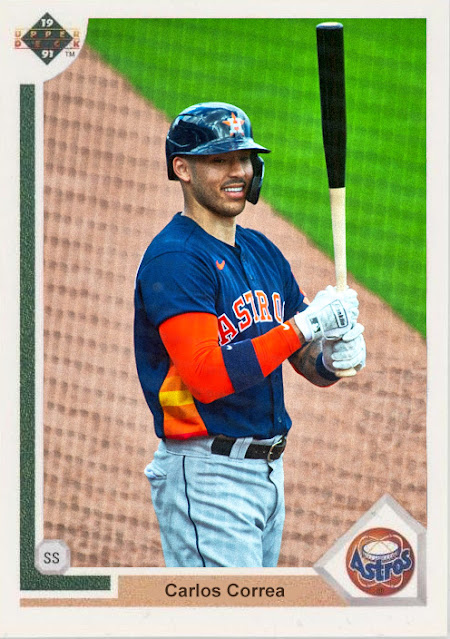 Well, I already had my fun the other night at the expense of the starting lineups, so now it's time for the rest of the rosters.

I bypassed the TV broadcast, cause I didn't wanna go through the whole drawn out bullshit that Kurkjian always puts us through ["and the next pitcher to make the roster is...HOLD THE PHONES, IS THAT VLADIMIR GUERRERO JR. ON THE LINE? LET'S TAKE 5 MINUTES TO TALK TO HIM"]. So I waited for these to come online and went for them as is. I've already skimmed them, and already have some thoughts. But let's dive right in.

PITCHERS:
Gerrit Cole, New York Yankees. Tack or no tack, this is pretty well deserved.
Lance Lynn, Chicago White Sox. Most surprising of all to me is that Lynn is one of three White Sox on the All Star team, and all of them are pitchers. No Abreu, No Anderson. Lynn, though, I do support.
Shane Bieber, Cleveland Indians. Will likely be replaced in the coming days by someone disappointing.
Nate Eovaldi, Boston Red Sox. Oh yeah, this tracks.
Kyle Gibson, Texas Rangers. Was expecting him to be the only Rangers nominee, but there are 3.
Yusei Kikuchi, Seattle Mariners. Only Mariner. No J.P. Crawford. Sad!
Carlos Rodon, Chicago White Sox. Again, a fine choice.
Shohei Ohtani, Los Angeles Angels. If you've got him in town, and if he can spare an inning, then yeah!
Aroldis Chapman, New York Yankees. Uh...when did y'all make this decision? Midway through May? Cause...uh...he's since blown a few saves. Whatever, I guess I'm grateful.
Liam Hendriks, Chicago White Sox. I'm fine with this.
Ryan Pressly, Houston Astros. A lot of 'the team is good and because of that, so is the closer' picks. I would have thrown James Karinchak or Emmanuel Clase in Pressly's spot.
Matt Barnes, Boston Red Sox. I can learn to love this one. He is actually having a pretty nice season.
Gregory Soto, Detroit Tigers. Second year in recent history where the AL team has just picked a random good reliever from the Tigers rather than getting someone who actually matters.
RESERVES:
2B: Jose Abreu, Houston Astros
SS: Carlos Correa, Houston Astros
OF: Michael Brantley, Houston Astros. So that's 4.
1B: Matt Olson, Oakland Athletics. And that's just 1 for the A's, who were in 1st place for the majority of the season. The Astros were not punished enough, and the MLB is rewarding them instead.
3B: Jose Ramirez, Cleveland Indians. I still think he should have started.
DH: Nelson Cruz, Minnesota Twins. Cruz is the only Twin on here, which tracks.
DH: J.D. Martinez, Boston Red Sox. If it weren't for Ohtani, he'd be starting
SS: Bo Bichette, Toronto Blue Jays. Yeah, I'm cool with this.
1B: Jared Walsh, Los Angeles Angels. Will end up being the only non-Ohtani Angels rep, which is fine considering his run so far.
C: Mike Zunino-OKAY, HOLD ON, STOP THE PRESSES. Let's...let's examine this. So...Mike Zunino was voted the only backup catcher on the All Star team for the AL. Zunino is currently batting .205, folks. He has a -2 in the fielding WAR category. I have said time and time again that Mike Zunino is one of the most overrated players to continuously hold a job in the MLB. And now, the AL has decided that not only is he an All Star, but he is the ONLY All Star candidate for the AL Champion Tampa Bay Rays. No Randy Arozarena, no Austin Meadows...Mike frigging Zunino. I do not like this pick at all, and no one will convince me otherwise. You have to REALLY twist stats to say with certainty that Zunino has been the second best catcher of the first half in the AL. Yasmani Grandal, Christian Vazquez or Gary Sanchez should be in this spot. Come on now.
OF: Joey Gallo, Adolis Garcia, Texas Rangers. Both very valid.
OF: Cedric Mullins, Baltimore Orioles. Should honestly be starting, and very well may worm his way into the starting lineup [what am I saying, it'll be Brantley].
NATIONAL LEAGUE:
PITCHERS:
Jacob deGrom, New York Mets. Duh.
Yu Darvish, San Diego Padres. Very well deserved.
Brandon Woodruff, Corbin Burnes, Milwaukee Brewers. Would have swapped Peralta for Burnes but down with both of these.
Kevin Gausman, San Francisco Giants. Yeah, he'd better.
German Marquez, Colorado Rockies. Seems to be the only Rockie on the roster. I'd have thrown in Story.
Trevor Rogers, Miami Marlins. The rook is the only Marlin on the roster, though I'm still waiting for Jesus Aguilar's surprise Home Run Derby admission
Zack Wheeler, Philadelphia Phillies. YOU'RE DAMN RIGHT HE IS.
Craig Kimbrel, Chicago Cubs. No one's disputing this.
Mark Melancon, San Diego Padres. Well deserved for a great season, and making up for the one he should have gotten last year.
Alex Reyes, St. Louis Cardinals. Another no-brainer
Josh Hader, Milwaukee Brewers. Yeah, literally all the NL pitching choices were valid and the right idea. Take that, Kevin Cash.
RESERVES:
C: J.T. Realmuto, Philadelphia Phillies. Was expecting Harper or Segura to be out other nod, but am perfectly fine with JT.
1B: Max Muncy, Los Angeles Dodgers. Should be starting.
2B: Ozzie Albies, Atlanta Braves. Should be starting
SS: Brandon Crawford, San Francisco Giants. Glad another one of the SF vets made it
3B: Kris Bryant, Chicago Cubs. Should be starting
2B: Jake Cronenworth, San Diego Padres. Valid pick, and a great choice for a super-ute
3B: Eduardo Escobar, Arizona Diamondbacks. Only D-Back, and a good pick too.
SS: Trea Turner, Washington Nationals. Oh, DEFINITELY. I worry he'll be too injured to play, but hey, maybe that opens the door for Segura.
OF: Mookie Betts, Chris Taylor, Los Angeles Dodgers. Yes and yes.
OF: Kyle Schwarber, Washington Nationals. Will require a sub, so maybe this one opens the door for Harper? Or, more likely, Trent Grisham or Steven Duggar.
OF: Bryan Reynolds, Pittsburgh Pirates. Another valid pick.
OF: Juan Soto, Washington Nationals. Of course.
Yeah, quite clearly the NL ones did much better than the AL, because Dave Roberts and co are better at playing to the strengths of the league.
I'm not hearing anything about the Final Man vote, so perhaps they're not doing that this year? Alright then. This may be where we're at, barring substitutions. I kinda wish they'd let us know who'd be starting at DH for the NL, and who's taking Trout's OF spot [I've got customs to make!], but this is still a good start. Hope it leads to a good game.
Posted by Jordan at 6:30 PM