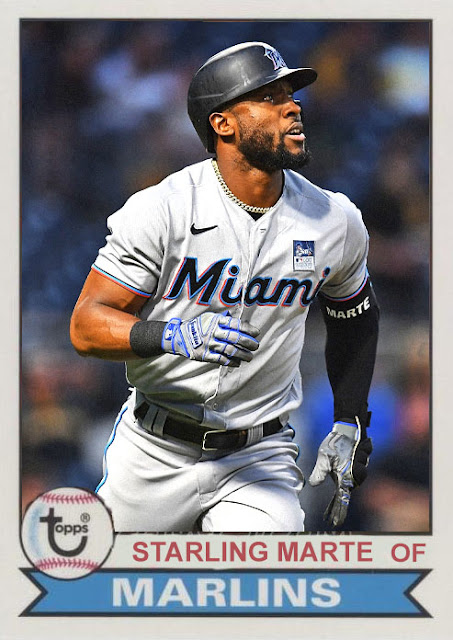 Ya gotta feel bad for Starling Marte at this point. After starting his career with a competitor, he ends up on a last place Pirates team, signs with a last place Diamondbacks team, gets traded to a playoff-bound Marlins team that A.) he gets injured before he can support in the playoffs and B.) lands in last place the year after. You can tell he wants to compete, and that he just has rotten luck.

So with that, I totally understand why he'd reject a 30-million-dollar extension to stay in Miami. The Marlins seem to be operating on a different level as he, and as good as he's been this season, he's not especially cohesive with the younger, more low-budget squad anymore. So he's good to go somewhere else and maybe compete. Fine. Go for it. It's very sad that the Marlins couldn't sustain the competitive genes, but it'd be even sadder if they trapped Marte there.

So where does he go? Well, there are a few options. The White Sox could decide that they would rather have a big anchor in the outfield rather than go with replacement-level guys for right now and eventually wait for Jimenez and Robert to return. Unlikely, but possible. The Phillies could honestly be a huge contender, considering the hole in CF which persists thanks to Herrera's injury, and the lack of willingness to rest on Luke Williams or Travis Jankowski to start. And you can't count out guys like the Mets or Dodgers who don't really need Marte but could use him as a level-up in places.

In Marte's absence, the Marlins have some options as well. They could either start Magneuris Sierra more often, or even start Monte Harrison more often, or they could use Jon Berti in the outfield and rely upon their glut of utility infielders to cover for them. A lot of these are just security until people like Jesus Sanchez [and, I suppose, Lewis Brinson] get back from injuries. But they're not completely exhausted without Marte, and could get a lot done with the pieces they have.

The Marlins aren't too bad of a team, and are just a few pieces away from having the potential to compete again. The rotation works, the bullpen still has a lot of nice pieces, and the lineup is still well-equipped with great contact and power hitters. It's just a matter of circumstance, and, like, waiting for the Mets to calm down.

Coming Tonight- Former MVP who's about to watch a lot of his teammates leave in the next week or so.