All Villar, No Pillar 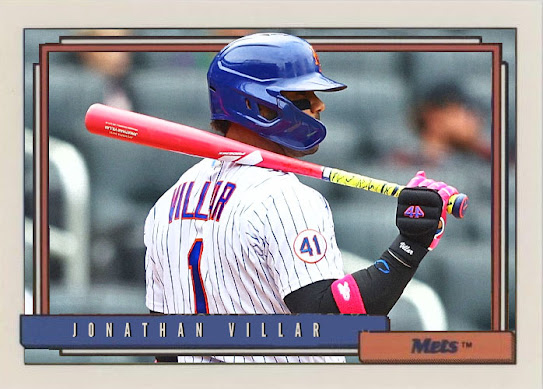 Indulge me. I always wanted to make a pun involving those two on this Mets team.

Well, the Mets, as I write this, are still in first in the NL East despite slipping a bit. Hilariously, the guys who stayed healthy during the first injury stretch are now getting injured, most notably Jacob De Grom and Francisco Lindor, but also David Peterson and Jose Peraza. So yes, it's good to have Conforto, McNeil, Davis, Nimmo and Villar all back, but now they've got to hope the guys who were healthy as they rose to first won't cost them now that they're injured.

The refreshing thing is that the Mets have been winning a few in Cincinnati, shutting the Reds out today and battering even the phones of the opposing fans [thank Villar for that one]. The only Opening Day lineup guy that's injured is Lindor, so Luis Guillorme and Jonathan Villar can flexibly move so that the infield works. Plus, Guillorme is still an excellent backup option and is still hitting .293. Also, J.D. Davis is starting again and still relatively hot, there's outfield flexibility with Pillar, and the bulk of the lineup is hitting again, especially Alonso, Nimmo and McNeil.

The pitching is a little trickier without DeGrom, Peterson or Joey Lucchesi. Tylor Megill has been a decent third option with a 2.63 ERA, and Robert Stock has been an odd but serviceable fourth, but...who's the fifth man? They've used relievers before, are they gonna keep doing that? Are they just sort of tapping their shoes waiting for Peterson or even Noah Syndergaard to come back? Are they just waiting for the trade for whichever pitching piece to come through? Hopefully they figure something out soon, because as good as Marcus Stroman and Taijuan Walker have been, that's just two guys.

I do think the Mets are the best contender of those in the NL East, but they've become more human in the last few weeks, and teams like the Phillies and Braves could very well jump on that. I don't even think the Phils are good enough to really sustain a lead over them, but you never really know what the deadline deals could bring, and how things could turn out for the division. Hell, maybe the Nats squeak by or something.

Coming Tonight: The White Sox have a lot of stars right now, but if you were to ask me the biggest x-factor player on that team, I'd give you this guy.