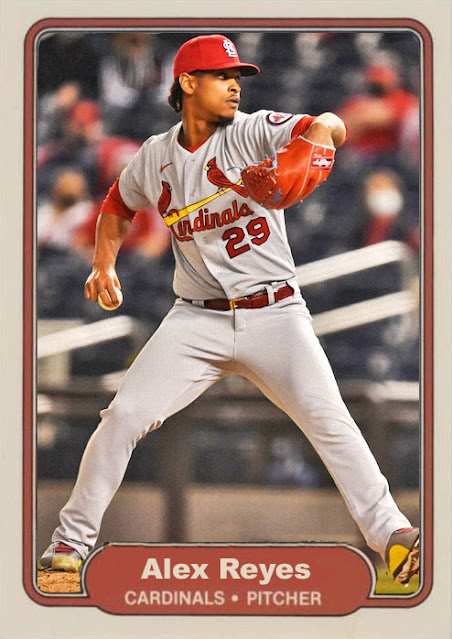 Matt Bush, Aroldis Chapman, Dellin Betances. All major prospects who were poised for starting roles only to be slowly converted to relief and later closing options. Some rose to the occasion, others fell. This is a trope that's existed for a while, and Alex Reyes is only the latest.

Alex Reyes was brought up in 2016 as a relief piece that started 5 games, and came off very well. So well that Topps printed roughly a ZILLION cards of him for 2017, a season he did not play a single game in due to injuries. He'd only play one game in 2018, and would recur briefly in the following two seasons due to injuries and control issues. So, for five years, a lot of buildup and anticipation has commenced in St. Louis for what kind of pitcher Reyes is going to turn into.

Well, now we have our answer- he's a closer. And a really damned good one at that.

I'm not denying the strategy, they used this on Carlos Martinez during a season where they had no room for him in the rotation. But with Jordan Hicks hurt, Andrew Miller returning to middle relief, Carlos Martinez returning to the bullpen and Gallegos and Cabrera seeming like setup options, the ninth opened up, and it suddenly became the only place Reyes could fit. He'd been decent in relief last year, but closing? Really? How would that work?

Well, it's the Eckersley factor- if someone can throw insanely well in a starting role, having them show up every 2 days for an inning is still a viable option, especially if that person is Alex Reyes and throws smoke. Reyes has notched 20 saves this year, leads the league in games finished, and has made an All Star Game in his first ever full season. He's 26, and a large chunk of his career has been eaten away by injuries [a problem his teammate Jordan Hicks is currently dealing with], but he's finally surging in a role made for him. It's looking like this is a career-making year for Reyes, and hopefully he can keep up the good work for the long term.

The Cardinals, on the other hand, are below .500, in fourth place behind the Cubs [who, despite falling like a brick this week, can still slaughter the Cards], and without Jack Flaherty for a bit. They still have surging hitters like Nolan Arenado, Tyler O'Neill, Tommy Edman and Paul Goldschmidt, but they have some holes that can't just be filled by waiting a little. Plus, the Brewers look to be really surging, the Reds have the momentum, and even the Cubs have more to talk about right now.

I imagine the Cards will find a way to dig up some momentum and stifle me yet again, as they always do. I'm just not quite sure how yet.

Coming Tomorrow- In the absence of the Rookie of the Year, the future MVP and any other options, he's finally starting and impressing people...a year later than he was expected to.