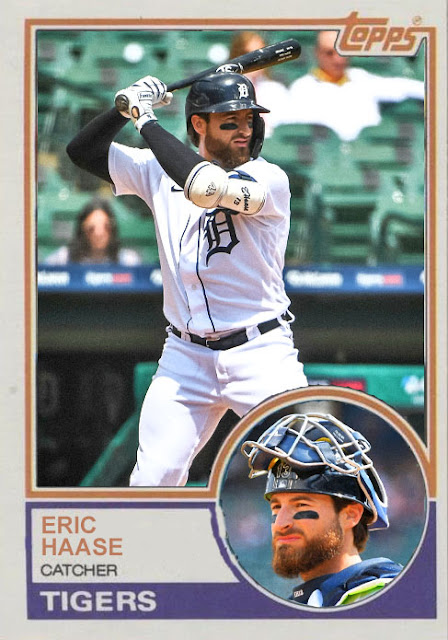 For a team that isn't going to make the playoffs nor even .500, the Detroit Tigers are...intriguing this year. A lot of singular performers that are impressive, like Casey Mize, Robbie Grossman and Jonathan Schoop, stuck on an otherwise-normal team.

Eric Haase's rise to starter ship in Detroit is the biggest example of this. Before this year, who had really given much of a thought to Eric Haase? He was backing up Austin Romine. Then, for 2021, the Tigers decided to go with Wilson Ramos, and then NOT go with Wilson Ramos, bringing the position to a trio of homegrown backups- Grayson Greiner, Jake Rogers and Eric Haase, assuming one of them would muddle through and take the starter ship. It's what the Pirates did when Frankie Cervelli left.

As it stands, Greiner's the third-string turned backup, Rogers is hurt, and now the position is all Haase's. And Haase has become a pretty nice offensive piece, with 38 RBIs and 17 homers, tied for first on the team with Schoop [who maaaay be on the way out?]. He's not the best catcher in the league, or even the division [Salvy, clearly], but he's a substantial, durable piece for a team in need of as many of those as possible.

Because a lot of the pieces of this team aren't exactly sturdy, they're more 'where can we put them this week?'. Jeimer Candelario and Niko Goodrum have each had like 5 positions in the last 2 years. Harold Castro's still a utility guy. Wily Peralta's only now being pinned down as a starter, and Fulmer and Alexander still kinda skirt the line. There's still too many pieces of this team floating around the majors and minors, blocked from really having a specific role in its growth. Having Mize, Haase, Skubal and Gregory Soto pinned down is a nice start, but after the exodus, if any, of the deadline, there's gonna need to be more than that. This Tigers team has been aimless for about 5 years, and it'd be nice if they got to the bottom of that.

Coming Tonight: A pitcher for a team that sort of has an alright playoff chance...but also entirely doesn't.