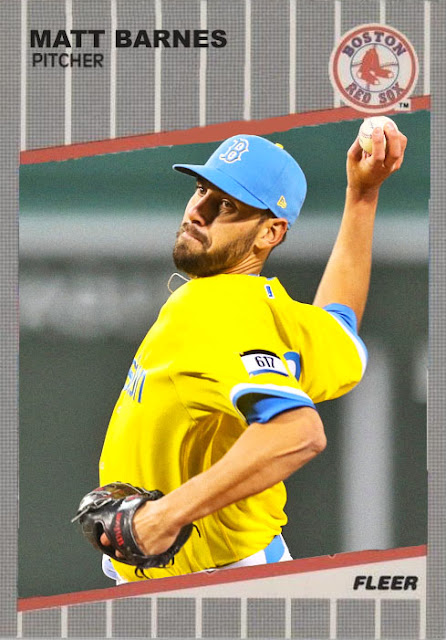 In 2019, when the Red Sox were abruptly left without Craig Kimbrel, they didn't have a well-thought out plan to recover. They just platooned two pretty good bullpen pieces from the 2018 season, Matt Barnes and Ryan Brasier, and saw if either would really take to the ninth. Kevin Cash was employing similar strategies in Boston, it was cool to be pen-flexible. So when Brasier and Barnes ended the season pretty equal, it was assumed that neither would be a winning option, and the Sox went with Brandon Workman for a season and a half. Then Workman got traded, and somehow Matt Barnes was left holding the ninth by the end of the year.

First of all, he's got 19 saves so far this season, has 63 Ks, a 2.61 ERA, and has been one of the most impressive bullpen arms for Boston. The Sox just signed him to a two-year extension with an option for a third. Any inkling that there'd be competition for the closing job just went up in smoke, and it's simply because of how consistent and dominant Barnes has been. Yes, there's always the chance that he could fall off, and he is 31 after all, but even last year, his worst contemporary season, still came with 9 saves and a 4.30 ERA. This has been the best season of his career to date, and it's a year that his previous seasons in relief have only built up to.

Now, are Barnes' seasonal numbers tied to the success of the Red Sox this year? Maybe. His other two best seasons to date, his 2017 and 2018 years, were also tied to playoff runs for the Sox. While he wasn't atrocious during their 2019 3rd-place year, he also didn't completely bring them further in many points. There is a chance that Barnes' luck could run out, and next year he could be back in middle relief. But the fact that he's on such a run so far this year, coming off an ASG nod and some great save numbers, is still pretty great, especially for a team that took a while to settle after Craig Kimbrel's departure.

The Sox are looking like major contenders this year, and it's thanks in part to Matt Barnes. It's that simple.

Coming Tomorrow- Looks like the Mets are getting beaten up again. Here's their savage lefty hitter, healthy again for your pleasure.