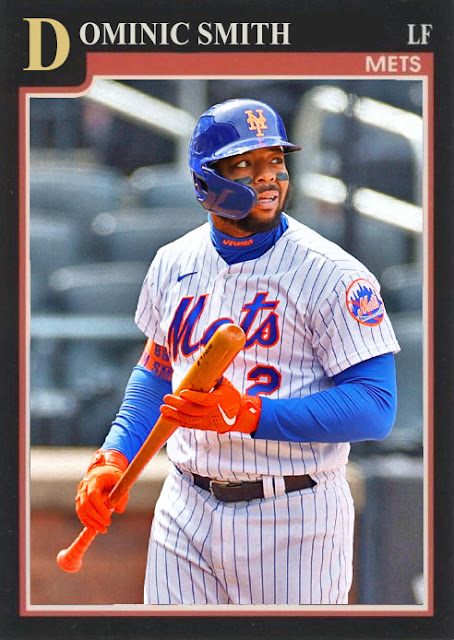 We're nearly halfway through the 2021 season, we have a clearer picture of how things will turn out, and we've already eliminated the Pirates and Diamondbacks.

So, like at the beginning of every new month, we've got to look at the last one. First off, I predicted some wild things at the end of May, let's see how many of them came true:

1. A Nationals-type team that isn't currently in the conversation comes to power and controls the talking points of the game. Well...wouldn't the Nationals count, then? Thanks to Kyle Schwarber and his leadoff home runs, the Nats are now in 2nd place and over .500, 3 games back from the Mets. I am getting the same kind of worried that I did 2 years ago when the Nats came alive in June, and I really hope they calm down a bit. I don't want this being the norm.

2. A candidate in the AL East and NL West races is either eliminated or has a crappy enough month to leave the race momentarily. NL West, no dice, but the Yankees and Blue Jays have stepped out of the main crux of the race. They're not completely out of it yet, but they're far from the Rays and Sox.

3. Only 2 no-hitters. Restraint! I was close. There was only one. German Marquez came within an inning TWICE this month, but couldn't stick it in. Still, congrats to Zach Davies and friends for getting one done this month.

4. A middling team decides midway through the month to start tanking and selling, and it comes as a shock to lots of people. Closest we're getting to this is the Royals. I don't know if they're selling, but they're in last as I write this, and they're falling apart very quickly.

5. Sixto. Well...3/5 ain't bad. Look, I've given up on Sixto Sanchez coming back and saving the Marlins this year. If it hasn't happened yet, it won't.

1. KYLE SCHWARBER. Holy crap, man. We knew he could hit home runs, that goes without saying, but SIXTEEN HOME RUNS IN 18 DAYS?? That is INSANE. The Cubs must be wishing they didn't non-tender him. As I write this, he has 25 home runs, 3 away from the top of the list, a place he was nowhere near at the beginning of June. I don't know how much longer he can hang with the big guns, but it's entertaining as hell.

2. The ENTIRE Indians rotation going down. Shane Bieber, Aaron Civale, Zach Plesac, Triston McKenzie...all either injured or in the minors. That's 4/5ths of the Opening Day rotation, and only Logan Allen and his 9 ERA remains. For a contending team, a 2nd place team, the Indians have completely run out of pitching luck. And trotting out people like J.C. Mejia, Sam Hentges and Eli Morgan, who aren't ready and haven't kept down very many runs, makes the absences of those aces feel even more visible.

3. The sticky-shit armageddon claiming Gerrit Cole, Tyler Glasnow and several others. Both AL East teams have had to figure out how to manage their rotations without these big pieces. Cole especially is hurting the Yankees, as it's become clear that the tack use was the key to his prior success.

4. The platooning of the NL Central. The Cardinals fell after May, and at different points the Cubs and Brewers took the division. Meanwhile, the Reds overtook the Cardinals while the Cardinals brought up Lars Nootbar. Now, all four are honestly in the race, even if the Brewers and Cubs are still the favorites. This makes really 3 divisions that are kind of up in the air between 3 or more teams.

5. One of the Dodgers' few losses of June being a no-hitter.

On the other end of it, 5 Things from June 2021 That I Probably Could Have Predicted:

1. The Astros overtake the A's in the standings. Of course they did. I'm not allowed to have nice things.

2. A massive losing streak from the Diamondbacks. Sad as it is, after the D-Backs' slide into May, I kinda figured they'd stay as weak as they were into June, and they certainly did considering their road losing streak.

4. The Phillies bullpen completely falls apart. Yeah, they're racking up a TON of blown saves, thanks in part to Hector Neris coming back to his old habits. Cause why change now?

5. Vlad and Ohtani still chasing each other for the home run lead. Again, it was happening in May, and it's still happening in June. I'm glad it is, too.

1. Some aspect of the All Star Game results pisses me off, and this includes substitutions.

2. One of the recently brought up rookies comes to prominence big time. It could be Kelenic, Manning, Nootbar, Franco, somebody I haven't been thinking of.

3. Hostile takeover in a competitive division.

4. A trade deadline deal that makes a middling team into a competitor.

5. A new name enters the home run leaderboard that no one is prepared for.

I think that's a sufficient amount of recappage for June. See y'all in a month!