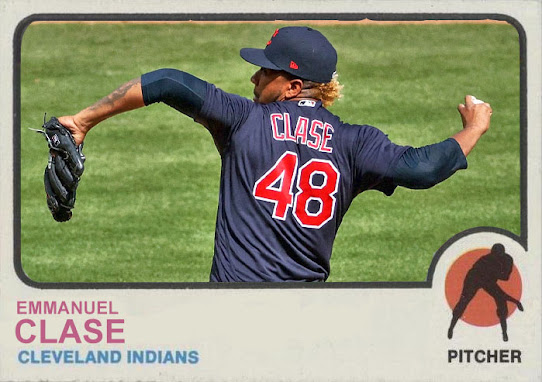 Was gonna do a whole Always Be Closing post on this guy, but Emmanuel Clase is in a weird position, as are all Indians pitchers, it seems. For one thing, he's healthy, which is very rare indeed in that pitching staff.

Emmanuel Clase, whose claim to fame before this season was being the chief piece in the trade that sent Corey Kluber to Arlington, was given the closing job right off the bat this season. Brad Hand was gone, Nick Wittgren was laying lowe, it was between Clase and Karinchak and Clase won. Good for him. So he gets the gig, is pretty lights out for a month or so, and has a disastrous May, with 3 earned runs and a much higher WHIP. At which point, Francona untethers him from the ninth and slots in James Karinchak, who's been better so far. Since losing the closing gig, Clase has still been strong, with a 1 ERA in 9 starts in June, and some scoreless runs so far this month.

But while Clase was yanked out of the ninth for a few high-ERA starts, he's only the tip of the iceberg. This season might be quickly becoming the year of the blown save. Strong relievers like Hector Neris, Aroldis Chapman, Will Smith, Raisel Iglesias and Daniel Bard are all losing their grip on the ninth, and racking up losses and blown saves all over. It's especially heartbreaking for someone like Chapman, who used to be one of the most dominant closers in the game, continuously blow saves at this rate. Neris I understand, he does this every year. But it's looking like more and more of a trend. And it might not have anything to do with the substance ban, though Chapman's drop-off looks slightly suspicious.

Closing pitching, as I've discussed on here before, is less of a guaranteed job than it's ever been. You don't have like 10 guys like Dan Quisenberry and Jeff Montgomery and Bruce Sutter having closing gigs for a decade or so anymore. You have Chapman, Jansen, Kimbrel, Melancon, and Hader. That's honestly it. Everyone else is year-to-year. Emmanuel Clase has a stellar season, that's great, but it's no career certainty. Edwin Diaz is even year-to-year after chasing K-Rod a few years ago. It's less stable because there are more relievers now. And if anyone can be a lights-out closer...the truly great ones are even rarer.

Still, the Indians bullpen is one of the few things the team has going for them right now, so I hope they stay in good shape.

Coming Tomorrow- Perennial contact hitter that only really soars in the midwest.