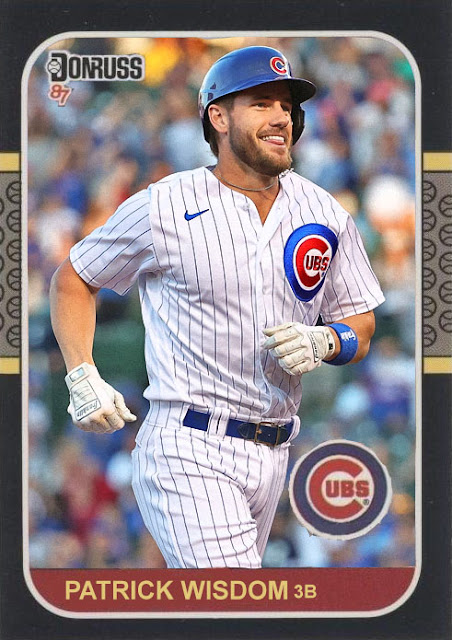 The majors have been chock full of feel good comeback stories this year. Yermin Mercedes finally making the bigs and getting off to an insane start for the White Sox. Scott Kazmir returning to the bigs after 4 years with the Giants. The Braves FINALLY bringing up minor league lifer Sean Kazmar for 2 games [and promptly releasing him]. Even Drew Robinson, working on a comeback for SF this year after battling his own personal demons. There's a ton of guys like that coming to prominence in 2021.

And Patrick Wisdom might be the king of them.

Wisdom, who was ironically TRADED for Drew Robinson, was a prospect for the Cardinals and Rangers that didn't do much, hit .260 in his rookie season but stayed under the radar. The Cubs brought him up in 2020 to no avail, but they tried again this year and he caught fire, hitting 11 home runs in 34 games, the first bunch of with hit in a blisteringly small amount of time, and becoming a major fan favorite on the North Side.

However, you have to include the factor that plagued Mercedes last month, which is that sometimes the all-powerful come-up rookie phenom doesn't always last the whole season. Mercedes bottomed out of the leaderboard for the White Sox, and while Patrick Wisdom still has a higher WAR than Anthony Rizzo, Nico Hoerner and Ian Happ, he does run the risk of fluke mentality, or diminishing returns. He's thankfully playing for a team that's wholly doing well, but since the last few weeks weren't as starry as his first few with the Cubs, it could mean that he's slowing down a bit.

Speaking of 'slowing down a bit', the Cubs have lost 12 out of their last 16 games, including some HUGE losses to the Marlins, Dodgers and now-division-leading Brewers. The NL Central is tight enough that it's not a season-ender for the Cubs, and the heart of their lineup is still impressing people all around, but with similarly-on-the-fence teams like the Reds and Phillies coming up, the Cubs need to convince people that they are not only worthy of staying in the race, but of leading the division again. The Brewers are great this season, but they've been just as wishy-washy as the Cubs. A bold statement needs to happen soon.

Coming Tonight: After some very power-heavy seasons, a first baseman hitting for average and working on his best season to date.