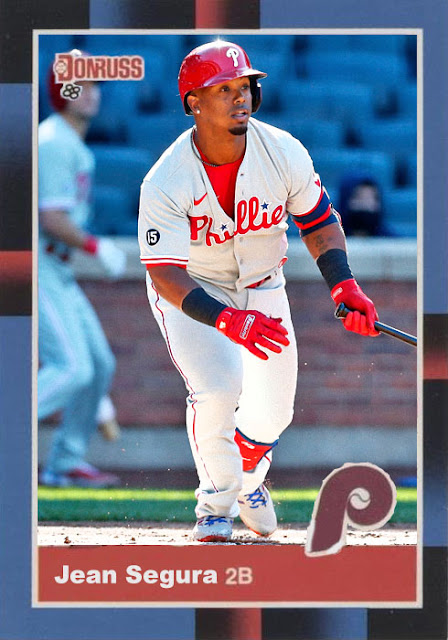 May be a bit of a shocker to some of you, but the Philadelphia Phillies are somehow still alive.

After a win against the Braves, led by homers from two non-power players [Jean Segura and Ronald Torreyes], the Phils have a slight lead over Atlanta and are back in 2nd, 4 games behind the Mets. The divide is palpable. The Rays were able to snap back against the Red Sox, the Astros were able to bridge the gap against the A's. Why not the Phils?

Well...this team, obviously, is still not perfect. Yesterday they lost 15-3, thanks to Vince Velasquez being himself. Matt Moore, Spencer Howard and Velasquez have become a very unstable latter half of the rotation, and are doing so in Zach Eflin's absence. If the Phils thought it was hard only having 3 good starters, now they're down to just Nola and Wheeler, and hoping that those other 3 days are good for the offense. And quite obviously the bullpen still needs help. They're not has bad as they have been, but lots of 3 and 4 ERAs, and even trusted arms like Brandon Kintzler and Jose Alvarado letting them down. Thankfully Archie Bradley's heating up, and Ranger Suarez has become an excellent closer, but this bullpen still runs the risk of preventing this team from glory.

What does help is that the flexibility of this lineup is beginning to aid them. Guys like Torreyes, Brad Miller, Travis Jankowski and Luke Williams are really impressing off the bench, and providing great backup material. Toe and Janko were incredibly cheap pickups that have thankfully succeeded for the Phils, and Miller was also relatively cheap but still one of the best bench bats in the leagues. Now that Herrera is back, they are using him primarily in center but also relying on Janko and Williams when they can, as well as potentially fielding offers for a big OF piece. And, of course, Hoskins, Harper, Realmuto, Segura and Cutch are performing as promised. Didi's beginning to heat up, and Bohm is still saddled by a sophomore slump that could lead to a rental taking his job for the latter bit of the season.

The bottom line is that this team is moving, and is definitely capable of performing well into the season if given the right momentum. They have a lot of huge pieces working right now, and they're nowhere near as piss-poor as they were in May. They just need...prolonged luck. Which is not easy to come by in Philadelphia.

Coming Tomorrow- The whole rotation got hurt. This guy was the first to return, and given his stance on COVID regulations last season, I kinda wonder what his thoughts are on the new name.