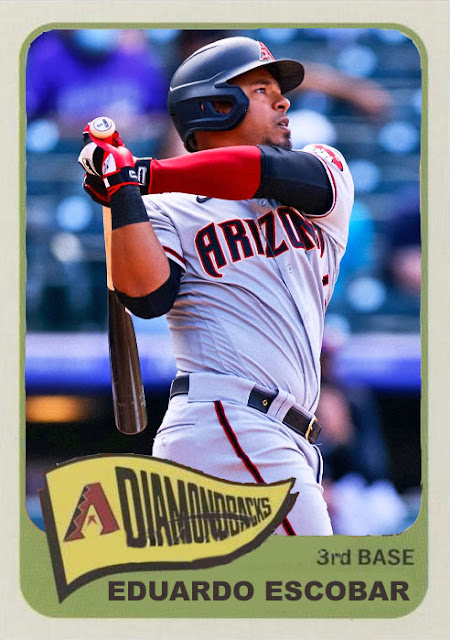 I think the surest bet of the next month is that Eduardo Escobar is going to change hands. This trade has been in the works for a month or so, with the White Sox being noted as a favorite for Escobar as early as mid-June. So really, the fact that it hasn't happened by now is kind of surprising.

In this time, though, Eduardo Escobar has become the sole good, healthy player in Phoenix. He's the only guy with a WAR higher than 2, he was the team's All Star representative, and his numbers dwarf the rest of the team's easily. Like, I hate for people to stand out from teams in the wrong way, but the rest of the Diamondbacks are succeeding in nailing a biting feel of mediocrity, and Escobar isn't matching that. So him getting traded would probably be a very good thing.

I still think the White Sox would be a frontrunner for Escobar, but...since Jake Burger and Leury Garcia are filling out the infield, perhaps the necessity isn't there for them. I could see the Blue Jays, Rays, Reds and Giants making a run at Escobar.

But I can't see the Diamondbacks getting much better after he leaves. This is easily the worst team in the league, and they're on pace for well over 100 losses. They've yet to even crack 30 wins, which is definitely a feat 96 games into the season. And the inability for even great players like Zac Gallen, Luke Weaver, Ketel Marte and Kole Calhoun to get things done while struggling through this roster, and this division, is also pretty stifling. The youth movement, with Josh Rojas and Pavin Smith going into the same routine, is also kind of disappointing.

I can't imagine how bad this team could be even without Eduardo Escobar. But I guess we're gonna find out.

Coming Tonight: In the past years, such luminaries as Jonathan Papelbon, Craig Kimbrel and Koji Uehara have rocked the ninth for the Boston Red Sox. The guy they've got now is pretty damn good too.