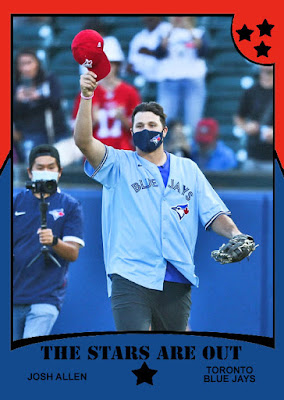 Yes, now that more people, including famous ones, are being allowed back into baseball stadiums, I am doing Stars are Out customs again. I realize I haven't updated the design since 2015. Making designs from scratch is difficult. But this one still works. So once again, the chronicles of people throwing out the first pitch at baseball games continues.
We're going in alphabetical order, so let's start with Josh Allen, QB of the Buffalo Bills. Because the Blue Jays play in Buffalo now, they can rope in Buffalo-area people for Buffalo crowds, if any. So of course the QB of the genuinely-good-now Bills can come by and throw one out. I'm glad they were able to do this. 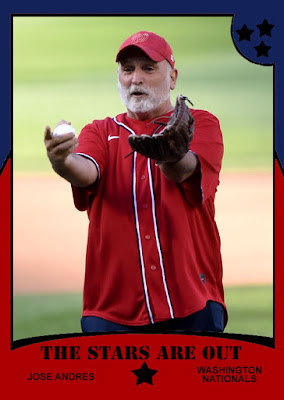 I feel like the genre of 'celebrity chef' has morphed from 'famous person who cooks things' to 'person who cooks things for intelligent reasons'. And Jose Andres is one of those. Andres is essentially a chef-by-way-of-activist, using his efforts to rehabilitate communities after the Puerto Rico hurricane, and eventually after COVID. He's definitely a good guy in the cooking world, and he's a DC area native, so he could throw out a pitch at the Nats game. 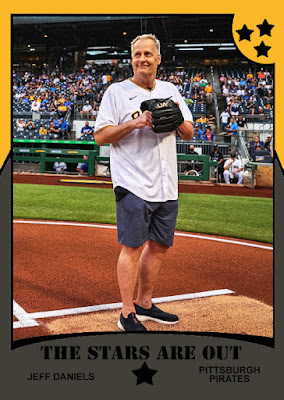 This one caught me off guard. Like Bruce Willis in Philly a few years ago, Jeff Daniels is a Pittsburgh guy? That's hella cool, I'm down for that. Daniels of course is best known by me for films like Something Wild, My Favorite Martian, Pleasantville and the Purple Rose of Cairo, and best known to most audiences for Dumb and Dumber, The Newsroom, and The Comey Report. Great actor, very versatile, known for a ton of things. Pretty cool that he's a Pirates guy. 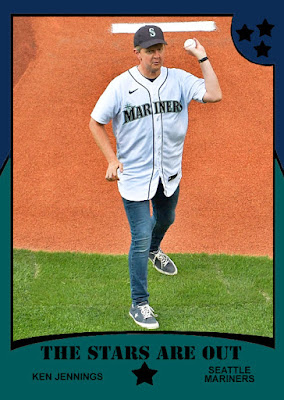 This one was much less of a shocker. Ken Jennings, if you follow him on twitter, is a diehard Seattle Mariners fan, and is one of the higher profile Ms fans in the biz. He's gained popularity recently thanks to Jeopardy's Greatest of All Time series, and his month or so of guest-hosting the show. I think I saw that he and James Holzhauer, noted Cubs fan, went to a game together, so I'm glad they all get to pal around at games. All we need now is Brad Rutter to throw one out as a Phils game and I'll have all three Jeopardy GOATs. And since I doubt Mark Labbett follows American sports, it's the closest I'll be getting to doing the entirety of the Chasers. 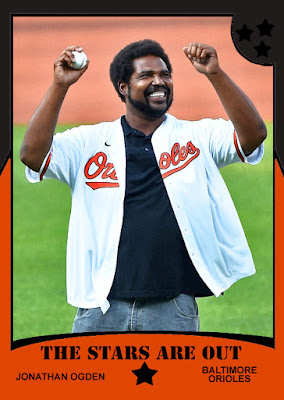 Onto more no-brainer sports stars. Jonathan Ogden is a Baltimore legend, a Ravens icon, and an all-timer defensive player, so of course he's greeted with open arms by Os fans. You love to see it. 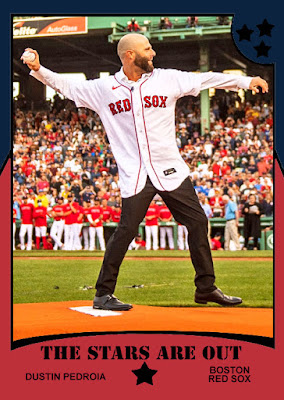 And then Dustin Pedroia got to retire with dignity at Fenway, throwing out the first pitch with a whole ceremony, and embracing the fans who loved him so much. Even as a Yankee fan, I have to respect somebody like Pedroia. He really was that good.
I'll roll out the next few of these when I get some more. Not sure when that will be.
Posted by Jordan at 8:20 PM