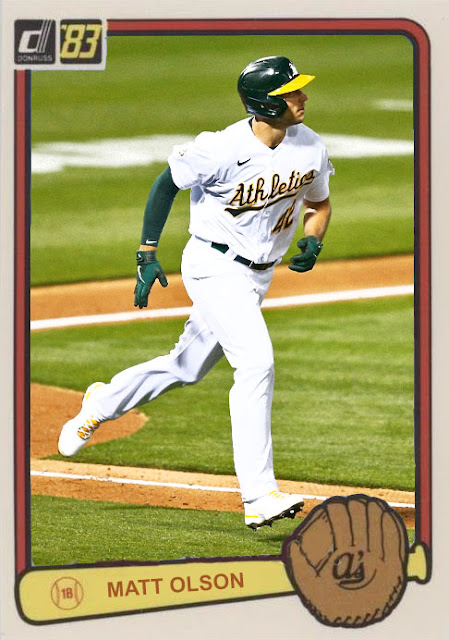 Something that has saddened me about the A's so far this season is that Matt Chapman's 2018 and 2019 seasons are seeming more and more like flukes. I don't know if it was the injury, or if he's just spent his goodwill, but his last two seasons have been very disappointing. His average keeps worsening year by year, he currently leads the league in strikeouts with 100, and even though he does have a 2.1 WAR right now, I don't see him as the team-carrying giant he used to be anymore.

It's really sad. I had such high hopes for him as a league-wide talent. But, it's not a complete loss for the A's. Because Matt Olson has ascended to his throne in Oakland, and man he's impressing people.

I'll add here that he's always been an impressive player, and his long ball and power numbers have always been solid. He hit 36 home runs in 2019, and has 123 in his career, which isn't bad for a 27 year old. But other than his 2019 season, he's never really been much of a contact hitter, and his average has always hung around .250 and below. Which isn't...BAD, but for a contact-friendly regime like Melvin's A's, it sticks out. It's why Mitch Moreland hasn't exactly caught fire here yet.

But Olson is currently hitting .287, which is pretty good imo, has 20 home runs, the most on the team, and leads the team in WAR with 2.8. Olson also has a .939 OPS, which is pretty damn impressive, and he has half of Chapman's strikeouts. We always used to worry about Olson striking out a lot, now he's taken the figure down a bit and is playing beautifully. You love to see it, even in a barely-hanging-around first A's team.

And despite the IL loss of Mark Canha, this A's team is still on the right track. Tony Kemp, Ramon Laureano and Sean Murphy are hitting well, and Chris Bassitt, Sean Manaea, James Kaprielian and Cole Irvin are all having great seasons in the rotation. The A's also still have a very minimal bullpen of just 6 or so guys who are all doing pretty well [even if Sergio Romo is a bit elevated], and Lou Trivino just had a scorching June. So they're all still in pretty nice shape.

However, they're in the midst of a series with Boston, and they're playing Houston next. In order to act like a 1st place team, they need to do well against other 1st place teams. Some wins against Boston would help, and a series win against the perpetually-clawing-back Astros would also be preferable. But I worry, once again, that the Astros will outlast the A's in the playoffs because the A's will play it too safe or lack sufficient edge once they get there. It's happened so often over the last 10 years, and I really hope it doesn't happen again.

Coming Tomorrow- A rare San Francisco Giant under 30 who's blowing the league away.