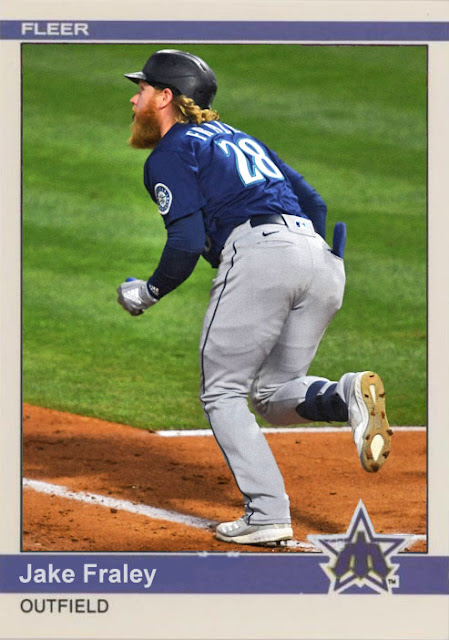 If it weren't for Logan Gilbert, I'd be laughing a lot harder.

Yeah, nothing really makes you feel good about yourself quite like seeing your team decimate the Mariners for a few games. The Yankees may still be a lower-tier threat, but...we can still beat the Mariners. The Mariners are still a very beatable team. And yet they do still have a few intriguing stories swirling around that make them a step up from the Angels and Rangers.

Like Jake Fraley, who was supposed to be doing what he's doing now last season, but he got held up, hurt or something. Nevertheless, Fraley has hit 22 RBIs in 37 games, has the highest OPS on the team and now has a higher WAR than Mitch Haniger, who has cooled down since his scorching shot. Fraley is a power hitter by trade, but he's better at RBI work and hitting it where it ain't than doing pure longballs. Him, Haniger and Taylor Trammell have made a serviceable OF, even without Jarred Kelenic.

Also, Luis Torrens is still hitting like mad, settling into the starting DH role in Seattle and racking up 9 home runs. Again, mostly power numbers, but it's more production than we've seen from him in a while, and it's good to see. Jake Bauers has also been delivering nice power numbers since the trade. And of course, the usual suspects like Seager, Crawford, France and Kikuchi.

Then, Kendall Graveman still has an ERA under 1 even after returning from the IL. He's been masterful in relief, seems to have a handle on the closing job, and is easily having the best season of his career. Paul Sewald has also embarked on a strong season in relief, and he's on a nice pace right now. And then there's Logan Gilbert, the guy who stunned my Yankees last week and is building on some recent excellent starts. Of the two big call-ups from earlier in the season, he's been the most successful, and he's gotten his ERA under 4 in 10 starts, slowly building up a strong rookie season. I'd love to see how he does on a stronger team, but maybe that will come.

Coming Tonight: A year after narrowly missing the Rookie of the Year, he's got an All Star nod and another strong season. So take that, I suppose.