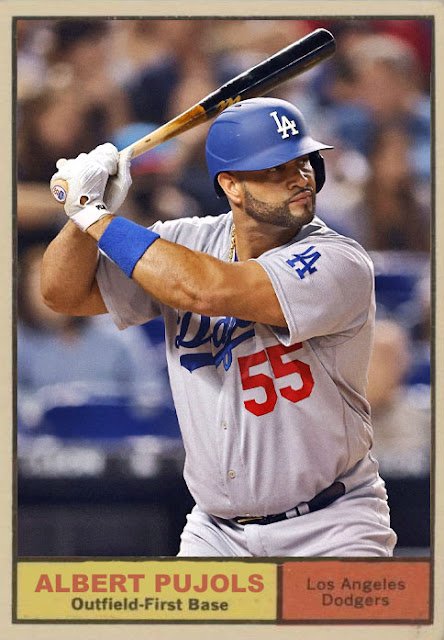 I want as many cards to be made of Albert Pujols as a Dodger as humanly possible.

It's become apparent that this is probably gonna be Pujols' last season. He's 41, his contract's up at the end of the year, he's clearly not the player he was, he's a surefire Hall of Famer, and he's one of the longest-tenured major leaguers in the game right now. He doesn't have much left to prove, and even if he's defying expectations as a bench bat in LA, it's still not gonna rewrite the story of his career. He was flawless in St. Louis, had 2 or 3 good seasons in Anaheim but fell off, and was let loose to make way for a youth movement that hasn't really happened yet.

And now, Pujols gets to play for the Dodgers. Which is kinda scary. That bat with THAT team. Oooookay.

Ironically, Pujols is the only one of the four MVPs on this team that's working properly right now. Betts and Kershaw are injured, and Bellinger's hitting .161. Pujols, meanwhile, is hitting .256 in a bench/1B role, has 8 homers and 23 RBIs, and currently has his highest WAR in 2 years...that being zero at the moment. Pujols knows he's not the league-conqueror he once was, but he can still hit, and he can still be relied upon by his team.

And right now the Dodgers are using whoever comes by. Billy McKinney and Luke Raley are starting in the outfield tonight with Bellinger, making the outfield's cumulative batting average .163. Both shortstops are injured so Chris Taylor is moving over from 2nd, and Max Muncy's moving over from 1st. Meaning Cody Bellinger is seeing reps at 1st base on nights where Matt Beaty isn't around. It's getting very precarious is what I'm trying to say here.

Also, without Kershaw [and, uh, Bauer], the rotation is now Buehler-Urias-Price-Gonsolin-who-the-hell-knows? Josiah Gray started a game recently, but it didn't go too well. The other 4 are great right now, even Price, but the fact that the Dodgers are scrambling for a fifth starter, even with Bauer technically healthy...that's just the testament to how foolish Bauer was for getting into trouble like that. We could have been fine through this.

I'm assuming the Dodgers will wind up alright, because they're the Dodgers. Pujols might even get some postseason hero moments for them, you never know. I just hope the big pieces that made 2020 possible for them get healthy and bring them back there.