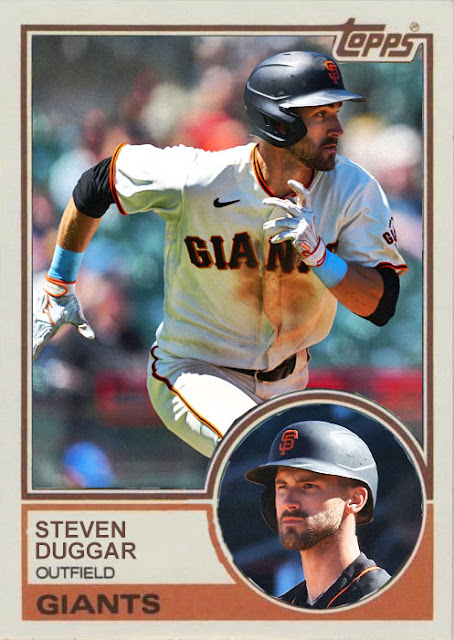 Gotta hand it to the Giants. It's July and they're still in first, and the only real moment of potential danger for them has been...right now. They lost 4 in a row, one of which to the Diamondbacks, they're without Brandon Belt and Evan Longoria, the Dodgers are within lapping distance, and the All Star Break is coming. If there's ever a time for a team to run out of steam, it is now.

And yet...the Giants have 4 pitchers with 6 or more wins, two hitters over .300, and an All Star starter. I think they'll be alright.

Really, the best indication of the Giants' legs, in this season or the next, is Steven Duggar. After a few seasons of missed opportunities, Duggar finally made the most of a call-up this year and is gleefully hitting .321 with 25 RBIs in 54 games, and he's lifting the outfield in a season where Mike Yastrzemski's average has yet to really show up [he's hitting well, though]. Yes, this team still has Austin Slater, but less of him, despite leading the team in steals. Slater is looking more like a bench piece, like someone who was filling Duggar's seat before he got ready.

Also, he's 27, which is youthful for the Giants.

The Giants are also trying 25-year-old Sammy Long in the rotation, and he's been decent so far, but hasn't come anywhere near close to the four 30somethings there already. Gausman and Disco are having awesome years, and Cueto and Wood at least have sub-4 ERAs. Even LaMonte Wade, the bench guy that's been doing a lot for the Giants this year, is 27. So is Wilmer Flores, who's been in the league so long I just assumed he was over 30.

But, despite not being the youngest team, they're still hanging tough with two of the giants of the league right now in that division. They still have Posey, Crawford, Solano and Ruf playing well for them. They still have Tyler Rogers as a tricky ninth piece. They still have so much mobility and flexibility, and are ready for another leg of the season if they need to really fight for 1st.

I still don't know if they'll be hugging first when the season ends, but I'm seeing more promise from this team than I have in years.

Coming Tonight: Some big rookie that everyone's going wild about..