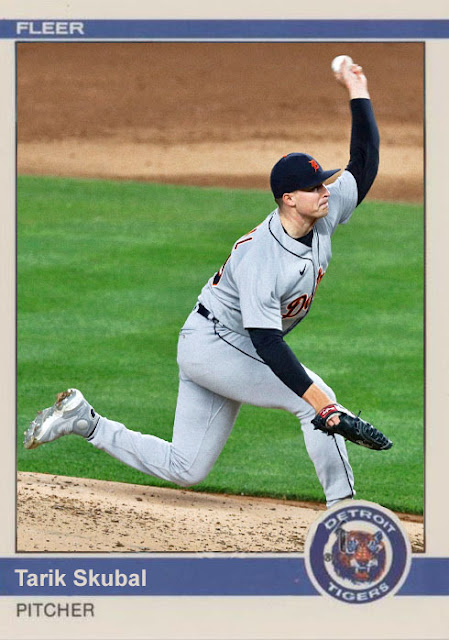 What is it with the Tigers and being the world's hardest-looking 3rd place team in the past 10 years.

I mean, next year it'll have been 10 years since they were in a World Series against the Giants, remember that? A team so strong that not even a red-hot Yankees team could stop them? Then halfway through 2015 they decided to start selling and have never recovered. J.D. Martinez, Matt Boyd, Shane Greene, Michael Fulmer...so many great seasons that were unanswered by the gods of wins.

And now here we are in 2021, where a lot separates the rest of the team from their one high-WAR standout, here being Casey Mize. Instead of like several standout performances, you get a lot of people who are doing kinda well but not well enough to be completely renowned. Jonathan Schoop has 16 homers and 52 RBIs, Tarik Skubal has 105 Ks, Gregory Soto's come from nowhere to get the ASG nod and the closing gig, Boyd and Candelario are doing their thing. It gives the effect of several voices shouting into an echo chamber at once. Like, what can be discerned? What can be taken out of this season?

Ooh, I'm deep all of the sudden. I literally just paid money to see Space Jam 2 in theaters and here I am writing like George Plimpton or some shit.

Alright, the rest of this post will be more my speed. The Tigers are too meh this year for anyone to care about, and arguably too meh to even attract trade suitors. Will people go for Matt Boyd now, two years removed from his expiration date? Do people want Robbie Grossman or Jonathan Schoop? Is it just gonna be people like Jose Cisnero and Tyler Alexander going?

Plus, with people like Wilson Ramos and now Nomar Mazara being cut after being signed as starting options, is it safe for Miguel Cabrera, who's doing his usual low-WAR high-power thing this decade? Is it safe for Daniel Norris, who may have finally made it to the end of his rope after being the main piece in the David Price trade?

I'm not sure where the Tigers will go from here, but I'm also not sure how much longer they'll need to wait for a playoff run. The youth is exciting me, but they'll really need to focus on that in order to really make a run at things.

Coming Tonight: In the shadow of Shohei Ohtani, one of the most underrated contact hitters in the game charges up.