The A's Settle Once Again 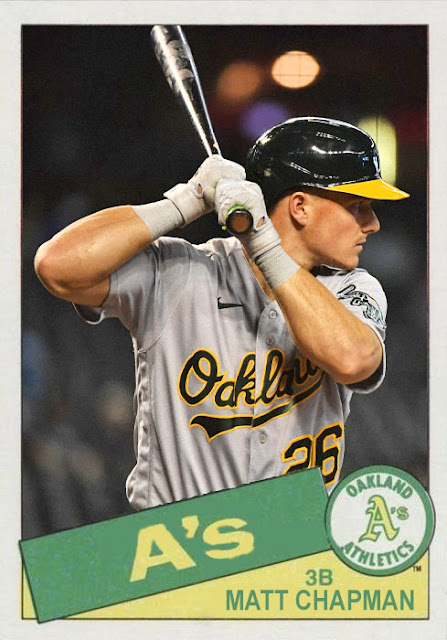 It's gotta be really annoying to have a good team built up and just drop in the standings to the Astros every damned year. The A's have been excellent in the past few years, can never get the division away from Houston, and when they do, end up losing to them anyway in the playoffs. It's gotta be humiliating. The hell else does it take??

The truth is that this season, the A's only have one league-caliber player, and that's Matt Olson. He's still hitting like hell and having a career year. So many players, like Matt Chapman, Sean Manaea, Chris Bassitt and Ramon Laureano are having good seasons, but not to their usual caliber. Even if Manaea's having a better season than he's had in a while, he's evened his W/L down to 7-6, and he's used noticeably less than Bassitt, who typically goes for longer starts. There's a lot of .255 and below averages running around this team. Sean Murphy, Matt Chapman and Seth Brown have great power numbers but are all hitting around .210. This is especially disappointing for Chapman, who used to hit for average, and is now being relied mostly for his longball numbers. And yes, Chapman's 43 RBIs aren't bad at all, but his strikeout numbers haven't gone down.

The A's are now 5.5 games behind the Astros, and battling the Padres and Angels in the next week or so. The Mariners are only 1.5 games behind them, and chasing the wild card spot that is now the top priority for Oakland. If this season ended today, it'd be A's-Sox for the WC spot, and that'd be...predictably decent. The Yankees, Mariners and Blue Jays are still technically factors in the wild card race as well, and are all looking at buying this deadline. Which means the next 2 months may be very difficult for the A's if they don't make some moves.

The priority should be one good contact hitter, somebody that could potentially play the middle infield [Escobar? Story? Schoop?]. They should also see about one other x-factor-type bat, some guy that'll go on an absolute tear once he arrives. The bullpen and rotation are set, [especially with Andrew Chafin], so they just need to sure up the lineup and they could bounce back. But will the competitors bounce back as well?

Coming Tonight: Could this season be the last for an all-time great? Even if he is, you know, a bench player for the Dodgers.