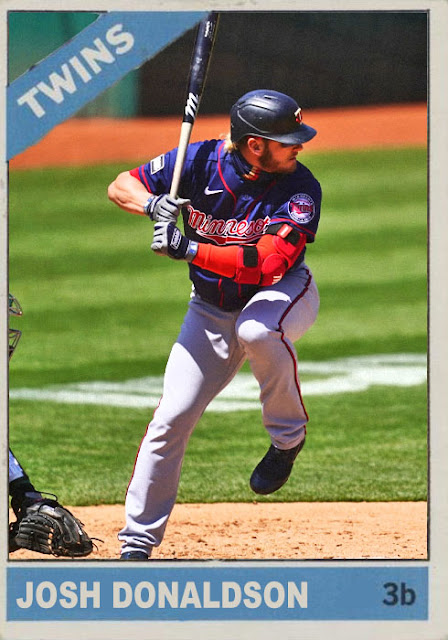 I think Josh Donaldson is one of many one-time MVP winners who are just idly standing by and doing their damndest in squads that aren't really built around them anymore. It's him, Andrew McCutchen, Joey Votto and Justin Verlander, really. And Donaldson might be the closest to MVP-caliber of those four this year.

Josh Donaldson is pulling 2 wins above replacement so far this year, which, while nowhere near Atlanta numbers, is pretty good. But he's become one of the few guys left in Minnesota who are really bringing it. It's just him, Jose Berrios, Jorge Polanco, Luis Arraez and Nelson Cruz. Byron Buxton is still hurt, Sano and Kepler are struggling, Andrelton Simmons is playing merely okay, and Maeda and Pineda could be doing better. The Twins are not in last at the moment...but at this rate they could be again very soon.

Plus, in the next two weeks, they could lose Cruz, Simmons, Pineda and Hansel Robles to potential competitors. Cruz is the most likely to leave, because this could be his last season and he's still got enough in the tank to help someone like Oakland or the White Sox who could really use a good DH. But still, Simmons, Pineda or Robles could be snatched, and there's also potential for people who are still under team control for a few more years. I'm not quite sure. But it's probably gonna be those guys...and without them, the Twins may sink lower.

The goal, I think, is for the youth to begin to take over more, and if so, that's really asking a lot of Griffin Jax, Bailey Ober and Trevor Larnach. At the very least, though, we are seeing progress from Alex Kirilloff, who has 34 RBIs and 8 homers, and from Nick Gordon, who's hitting .262 with 5 steals. But it's not a universal crunch, and even still, the youth movement is still gonna have to share time with signed veterans like Josh Donaldson for a few more years [unless they trade him this offseason, which is also likely].

I'm waiting for the Twins to get lapped by the Royals in the stands. Considering how badly they've been getting beaten by the O's lately, it may be a while though.

Coming Tomorrow- Catcher for a last-place team who just hit a very high-profile grand slam against a competitor.