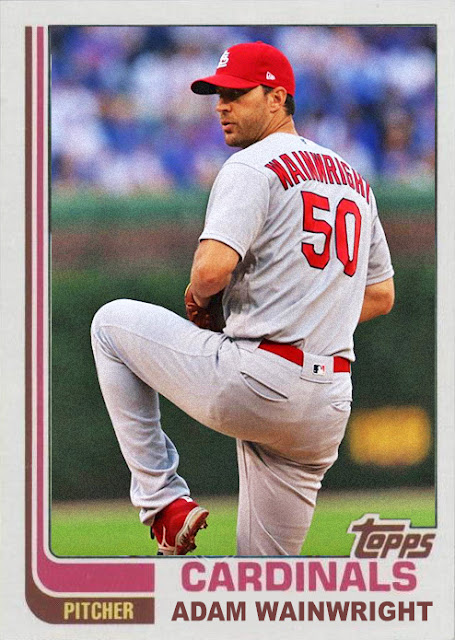 In doing an Adam Wainwright custom, I have to now look up what insane Cardinals stat he's topped now, as that's basically become his god-given right as a Cardinals pitcher now. That's what he and Yadier Molina keep doing, just climbing the all-time Cards leaderboards.

...let's see, with 154 wins, Adam Wainwright is now the fourth-winningest pitcher in Cardinals history, behind Bob Gibson and two other people I am too indifferent to look up. You could argue that the fact that Wainwright has played for St. Louis since 2006 and has just now reached 154 wins says more about the devaluation of the win, as well as the over saturation of the pitching rotation in general, but...even if it is *only* 154, it's still a good number, and it puts Wainwright in great company among Cardinals. I can only imagine they're putting Waino and Molina on the wall of fame when they retire, because...come on. I hate the Cardinals and I can even agree with that shit.

Now, Baseball HOF on the other hand? I wouldn't say Wainwright has THAT great a case, but...Molina will probably get a ton of support, and I don't really see why he shouldn't.

Do the Cardinals have much else to say this year that doesn't have to do with all-time leaderboards and individual achievement? Well...it's tough to say. The team's at exactly .500 right now, which...while putting them at third, isn't...great. I mean, I can only imagine the fans aren't THRILLED, as they got Paul Goldschmidt over the winner and he was supposed to turn them into contenders, and now...it's more of a team effort than the 'Paul Goldschmidt show' as it were.

It's really the same guys from last year who are running this team this year. Paul DeJong, Kolten Wong, Marcell Ozuna, Harrison Bader. The new faces that are joining the charge aren't new signings, but rookies like Daniel Poncedeleon, Giovanny Gallegos and Tommy Edman, who are all doing relatively well. I mean, I honestly don't think this is the kind of team that wins by having big feats of offense and big, power hitting strong dudes showing off. This isn't the Yankees or Dodgers. This is a more calculated, tricky roster, made up of guys like DeJong and Wong who are getting it done with hits and RBIs.

I don't know if this means they can chase Milwaukee and Chicago, but...they're certainly allowed to try.

Coming Tomorrow- Says a lot about this season where I thought I'd done a custom of this guy in April, but I hadn't. That was Tommy La Stella. So now I'm finally doing one of him.
Posted by Jordan at 8:56 PM