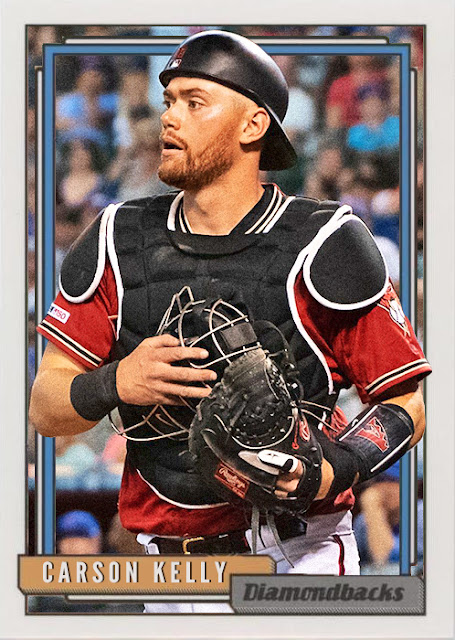 [Music Pun Streak #4. A stretch, but it applies]

I feel like 2019 has been the year of the Backup Catcher Insurrection. Now, maybe I'm noticing it more this year and it's been happening this frequently for a while, but this year more than ever, I'm seeing more and more backup catchers, or former backup catchers, getting handed the spotlight and absolutely killing it as a starter. This is a trend I like, because I am a fan of journeyman fringe players finally getting their due in the spotlight, no matter how long that lasts.

So, below, I'm gonna talk about some of my favorites, because why not:

-Carson Kelly, Diamondbacks. Kelly spent 2017 and 2018 as a backup in a city where you're really only ever going to be a backup, and that's St. Louis. As long as Yadier Molina is healthy, you're not starting games. And even in his opportunities in St. Louis, Kelly barely hit. But after a trade to Arizona, for Paul Goldschmidt of course, and after an injury to...professional glass-boned catcher Alex Avila, Kelly was handed the starting spot, and he delivered, hitting .264 with 12 home runs, and running with a 1.6 WAR. In a relatively strong lineup, Kelly has become a constant, which is a nice touch.

-Matt Wieters, Cardinals. Hey, remember when I said that as long as Yadier Molina is healthy, you're not starting games? Well...Yadier Molina's not healthy. So the Cards are lucky that their backup is perennial All-Star and former Topps holdout Matt Wieters, who's slugging like hell, with 8 home runs and 18 RBIs in 41 games. Though, seeing as Wieters has been injury-prone lately, you might wanna keep on the backup for the backup, Andrew Knizner.

-Pedro Severino, Orioles. Initially, the O's were thinking of starting professional starter Jesus Sucre, but after some disappointing showings from him, they turned to Severino, who'd made a name for himself as a backup for Wilson Ramos in Washington, and getting some playoff starts before sinking back into backup mediocrity. But Severino finally found his bat, holding the third-highest OPS+ in the lineup, and hitting 9 homers. With the rise of Chance Sisco, I'm not sure how much longer Severino will stay catcher in Baltimore, but he's done fine for them in this interim.

-Curt Casali AND Ryan Lavarnway, Reds. Yes, a rare double feature, because we're talking about people who've relieved starter Tucker Barnhart, who's missed time due to injury, but also the lack of numbers. Initially, the Reds turned to last year's sturdy backup Curt Casali to fill in, and he's done fantastic, giving much better numbers than Barnhart, with a .253 average and 9 home runs. But once Casali got injured, the Reds hastily brought up AAA-mainstay Ryan Lavarnway, who'd been a backup for Boston during their 2013 run. Thankfully, Lavarnway's numbers have been fantastic in 4 games, with 7 RBIs, including 2 home runs, in that stretch. I wonder how the Reds will operate once Barnhart and Casali return, but I kind of picture both backups staying in the picture.

-Travis d'Arnaud, Rays. This one goes back to my old theory: Mike Zunino sucks. He sucked for Seattle, and he's sucking for Tampa. What do people think they're getting with him? He's terrible. He has literally only finished with an average higher than .250 ONCE in his career. So imagine my surprise when the guy the Rays get to cover for him is former injury-prone Mets catcher Travis d'Arnaud! I was counting the days til he got injured again, but that didn't happen. And I remembered...when d'Arnaud's healthy, he can be one hell of a hitter. I direct you to his 3 home runs against the Yankees. He's had 11 overall, with 33 RBIs and a .265 average. Welcome back, Travis.

-Kevan Smith, Angels. For years, this guy was a backup choice in Chicago, usually passed over for people like Alex Avila or Omar Narvaez. And he'd always be a stellar backup as well, hitting into the .280s over his lack two seasons. But he was waived by the Sox last year, wound up in LA, and after an injury to Jonathan Lucroy, Smith became the starting option. Unsurprisingly, Smith has made the most of it, hitting .270 with 27 hits. His backup is coincidentally another 31-year-old journeyman, Dustin Garneau.

-Roberto Perez, Indians. Possibly the most important one on this list. After the loss of Yan Gomes, the Indians decided to continue as a competitor, but...did not sign a name at catcher, even with Jonathan Lucroy, James McCann and Matt Wieters in the picture. They figured they had something with longtime backup Roberto Perez, and thank god they were right. Perez has 16 home runs in 73 games, and a 2.2 WAR with an 8 fielding variable. He's one of the most important pieces of a team that's only been getting better.

I'm tired, but pretend I talked about Tony Wolters and Austin Barnes here. You could probably tell they were gonna become great starters eventually, but...pretend I did writeups for them.

Coming Tonight: On a Red Sox team determined to prove themselves...this guy may be their best player this year.
Posted by Jordan at 11:43 AM
Labels: Carson Kelly, Custom Cards, D-Backs