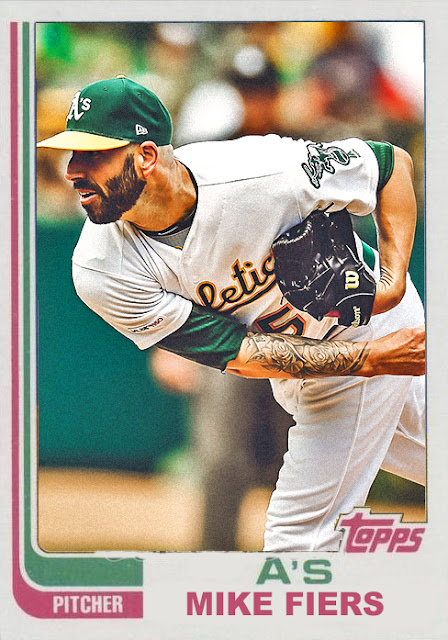 Well, the Oakland revolution seems to be starting back up again, and just in time, too: we're about to hit the trade deadline, and the A's and Rangers seem to be deciding that they want to compete for that wild card spot. This is also a year where the Indians, Rays and Red Sox also seem to want the spot, so if the A's REALLY want it, they'll need to shift into overdrive like they did last year around this time.

And...to their credit, there does seem to be some shifting going on.

First of all, one of the first moves of the deadline season was theirs, snatching Homer Bailey from the jaws of Kansas City, plucking him into the rotation in place of an opener strategy that turned out to be short-lived, and having him get a win in 6 innings with 6 strikeouts, which is not bad for a guy we all counted out last year.

Additionally, the A's rotation is working without Sean Manaea, Marco Estrada and Frankie Montas, out due to injuries, injuries and cheating respectively. Mike Fiers has become the ace, and what a mighty good ace he's become. Daniel Mengden, Brett Anderson and Chris Bassitt have been solid starting options as well, all three sporting positive W/L percentages and ERAs below 4.50. And then you have your solid relief options with Liam Hendriks, Blake Treinen and Yusmeiro Petit all doing super-well, and Taiwanese journeyman Wei-Chung Wang doing some solid stuff when no one's looking.

Really, my one criticism with this team, especially in comparison to last year's team, is the lack of shocking developments in the lineup. Yes, you have Matt Chapman, Marcus Semien and Matt Olson all doing well, but there hasn't been someone jumping into the lineup and making huge plays or moves. Even Ramon Laureano has mellowed out after a while. They need a sneaky bat, someone who could maybe fit into the outfield that would push them just a tad further past the Rangers.

Another insane A's comeback could happen, and I really hope it does.

Coming Tomorrow- Of all the outfielders in San Diego, it's THIS GUY that's having the best season.
Posted by Jordan at 8:19 PM