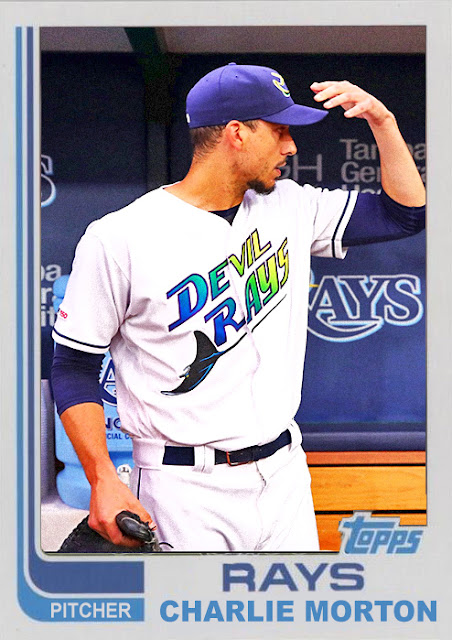 So, let's just be honest with ourselves. The Blake Snell bubble...it has popped. I know it's early, but...there's something that seemed very flukey about his 2018 season, and despite some multi-K starts, I'm not seeing a great deal of consistency with his 2019 season. The Rays banked almost everything on Snell being a perennial ace, and...I don't think Snell is an ace.

Now Charlie Morton on the other hand, THAT is an ace. You saw it in bits and pieces in Pittsburgh, you saw it in full force in Houston, and in Tampa it is glaringly obvious. This man can run a rotation like it's his damn business. The guy's sitting on a 9-2 record, with 132 strikeouts, and a 2.36 ERA (lowest in the AL). After two seasons of giving solid fourth-fifth-man work as an Astro, I think Charlie Morton's ready to head the rotation. If we get a Morton-Snell-Chirinos-McKay-Stanek and friends rotation, then that's gold. And McKay will probably move up over time.

Also...sidenote...Brendan McKay, man. I was not expecting him to be the...behemoth that he's been thus far in Tampa. He pitched a gem for his first start, and...okay, he has yet to have a successful at-bat (so you're Michael Lorenzen, that don't impress me much), but...as a pitcher alone, he is a jolt of fresh air to a formula that was starting to get stale. I kinda want McKay to stay in the rotation full-time once Glasnow comes back. I know they really love this opener idea, but...five starters also works.

The rest of the Rays are keeping on their solid traditions. Nobody's doing terribly in the lineup, Alvarado and Sanchez make a nice closer platoon, Ji-Man Choi's injury opens up a door for Mike Brosseau, Mike Zunino's injury is allowing Travis D'arnaud to be a perennial starter for a team for the first time since 2015ish, and all the non-catcher, non-choo starters all have 10+ home runs. For a second place team, they could be doing worse.

Expect these guys to heat up a bit after the ASG break, and possibly add another bench piece.

Coming Tonight: As my hometown team sinks further and further into the ground, let's at least talk about a pitcher that's doing well for them.
Posted by Jordan at 9:06 AM
Labels: Brendan McKay, Charlie Morton, Custom Cards, Rays