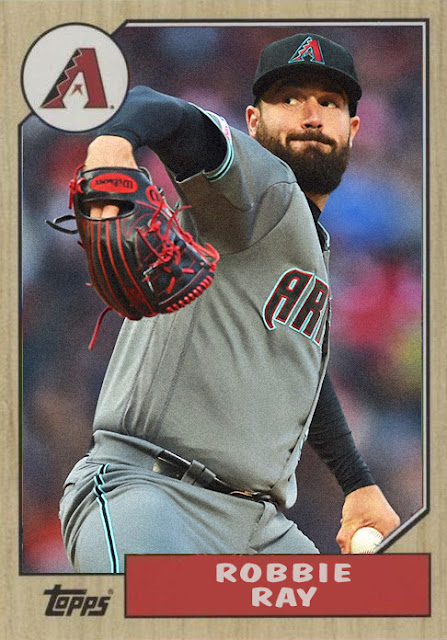 I think the first time Robbie Ray came on my radar was when he finished a season with an 8-15 record, still had 218 strikeouts, and everyone started bringing up the 'are strikeouts more important than wins' thing, which...they are, wins don't mean shit anymore, just ask Felix Hernandez and his Cy Young award. But everyone was saying that despite this bad W/L ratio and 4.90 ERA, that Robbie Ray had finished a fantastic season and deserved a closer look.

Which...look, I've never been a fan of stat-twisting. Just in principal, I don't like it because it allows me to have to look at something I already see one way, and squint at it until I see it in the way everyone else wants me to. It's like...in 2016, people tried to convince me that James Paxton was a good pitcher, and nothing statistically or even in person was selling that (until 2017, that is). Or like how Jorge Polanco was getting praise from sabermetric guys despite doing absolutely nothing until this year.

I mean, thankfully Robbie Ray had a much better season in 2017, despite...having the exact same amount of strikeouts as he did in 2016, and became a mainstay in the Arizona rotation. But now...Ray's having arguably the same problem that he did in 2016. He's got 137 strikeouts, a team high, and a 3.96 ERA, but a completely even W/L ratio, and he's leading the league in walks. There must be a glitch on BR dot com's page, because the D-Backs page list his WAR as .8, while his player page says his seasonal WAR is 1.2.

Weird when the algorithm's doing the stat-twisting, but...this is the dystopia we've chosen to live in.

The weirdest part is that Robbie Ray, in all his...okay-ness and twisted stats, is that he's being listed as a trade target from MY OWN NEW YORK YANKEES. THAT'S RIGHT. First JA Happ's troubling stats weren't enough, then James Paxton's troubling stats weren't enough, so WE MIGHT ADD A THIRD GUY WHO GETS A LOT OF STRIKEOUTS BUT DOESN'T WIN MANY GAMES. Because we CLEARLY NEED MORE OF THOSE.

Robbie Ray could be a good fit as a Yankee. I could be very wrong, and he could come to life in the Bronx. But his stats so far this year...aren't assuring me. They're good, don't get me wrong, but they could be better. Especially in the wins column. We could be signing up for Lance Lynn 2.0, and I don't want him to become another Lance Lynn. We already have the 1.

I mean, again...I'd love to be wrong. We could trade for him and he could be great, but...I just worry. And maybe I'm even more wrong, somebody else trades for him and he becomes a major threat.

Look, this post may not age well...like...most posts I write, but I want to get across the fact that I like Robbie Ray, and he's one of the deadliest strikeout artists up there, and...I hope he keeps things up, no matter who he finishes the season with.

Coming Tomorrow- We've got a lot of sets of brothers in the MLB right now, but these two are the only ones I can think of where both are on amusing hitting streaks. Here's the younger one, playing for the worse team.
Posted by Jordan at 9:07 PM
Labels: Custom Cards, D-Backs, hear me out, I swear I wrote this sober, Robbie Ray