A Tired Blogger Reacts to the 2019 All Star Rosters 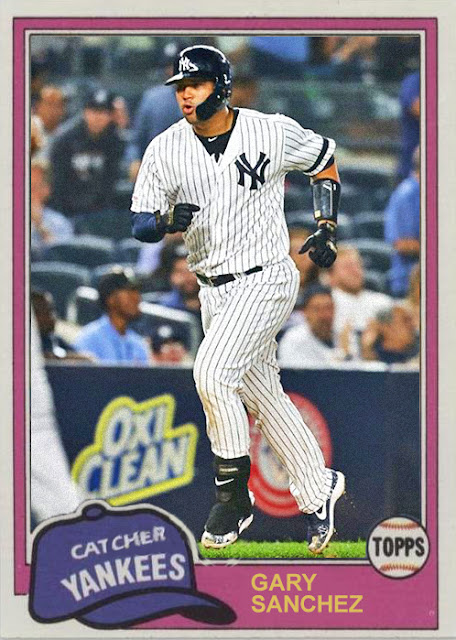 Right. Now that this has finally been taken care of, let's examine things.

First of all, I don't know about you all, but I rather liked the ASG election format this year. Made things a little more real, a little more fair. I genuinely think we got the best starters via this format this year; any other year you'd get people like Mookie Betts or Jose Altuve in there, guys who haven't been having the best seasons but have the star power. But this year, we got a fair shake of people who've been having great 2019s getting starting positions.

Real quick, let's go over the ones we've known for a few days, the starters.

AL:
C: Gary Sanchez, Yankees. All for this, especially if Judge didn't get a starting gig this year.
1B: Carlos Santana, Indians. I voted for Voit, but...if Voit's gonna be hurt for a bit, then getting a strong, healthy Slamtana is the next best thing
2B: DJ LeMahieu, Yankees. This makes the most sense of any pick, imo.
SS: Jorge Polanco, Twins. Not a Polanco fan, at all. I feel like he's done very little but gotten a ton of praise for it. This is his first wholly fantastic season, so I'll take this.
3B: Alex Bregman, Astros. Of course.
OF: Mike Trout, Angels. An obvious one.
OF: George Springer, Astros. I didn't vote for him due to the injury, but I think he deserves this one.
OF: Michael Brantley, Astros. Another one I agree with.
DH: HUNTER PENCE, Rangers. I love this one. I really hope he's back from the IL by the time the ASG comes around.

NL:
C: Willson Contreras, Cubs. If Realmuto's not gonna be in the F3, then I'm cool with this.
1B: Freddie Freeman, Braves. How is this only his second starting gig??
2B: Ketel Marte, D-Backs. This was the biggest surprise for me, as I thought Moustakas would snag this one. Still, Marte's doing beautifully this season, so I'm not too mad.
SS: Javier Baez, Cubs. Of course.
3B: Nolan Arenado, Rockies. Another no-brainer
OF: Christian Yelich, Brewers. Again, NL did pretty well here.
OF: Cody Bellinger, Dodgers. NL might win this year with this lineup, tbh.
OF: Ronald Acuna, Braves. When Acuna is your wild-card OF pick, you know you've got a good group.


NL:
SP: Sandy Alcantara, Marlins. Gonzo pick, especially considering he's probably the only Marlin on here, but satisfying enough.
SP: Walker Buehler, Dodgers. Deserves it.
SP: Luis Castillo , Reds. I think he's the only Red, and that's selling that team very short.
SP: Jacob deGrom, Mets. Of course.
SP: Zack Greinke, D-backs. Yeah, deserving one.
RP: Josh Hader, Brewers. Again, the NL picks are pretty spot on.
SP: Clayton Kershaw, Dodgers. It's weird that it's 2019 and we're going 'eh, are we sure?' about Kershaw, but...I'm not mad about it.
SP: Hyun-Jin Ryu, Dodgers. THIS ONE makes sense.
SP: Max Scherzer, Nationals. Duh.
RP: Will Smith, Giants. Kinda puzzled as to why we only have 3 relievers on this team.
SP: Mike Soroka, Braves. I like this pick.
RP: Kirby Yates, Padres. No-brainer closer pick.

And finally, let's talk about the bench players we've got:
AL:
C: James McCann, White Sox. Became obvious once it became apparent that Sanchez would win.
1B: José Abreu, White Sox. I'm cool with this one, even if Anderson's been left off.
1B: Daniel Vogelbach, Mariners. Probably the only M's nominee.
2B: Tommy La Stella, Angels. Fine with this one.
3B: Matt Chapman, A's. I love this pick, but I'm sad Chapman might be the only A's guy.
SS: Francisco Lindor, Indians. Should have been higher in the SS voting.
OF: Mookie Betts, Red Sox. Bound to happen.
OF: Joey Gallo, Rangers. A lot of these are just reparations for missing the ASG primary vote.
OF: Austin Meadows, Rays. This one too.
OF: Whit Merrifield , Royals. Would have gone with Dozier over him, but Chappie was blocking that at third. Merrifield is still a solid choice if the Royals are only bringing one guy.
DH: J.D. Martinez, Red Sox. A reparation for missing a surefire starting spot (thanks, Pence!)

C: Yasmani Grandal, Brewers. Makes sense, considering the fan push for the guy that we got toward the tail end of the vote.
C: J.T. Realmuto, Phillies. I love him, but how is he the only Phillie?
1B: Pete Alonso, Mets. With the rookie season he's had, of course.
1B: Josh Bell, Pirates. Arguably should be starting.
2B: Mike Moustakas, Brewers. Arguably should be starting, glad he's here.
3B: Kris Bryant, Cubs. After the entire Cubs outfield got blanked in the primary, good to know a Cubs position player still made it.
3B: Anthony Rendon, Nationals. HOW IS THIS HIS FIRST NOMINATION?
SS: Paul DeJong, Cardinals. Yeah, sure. They're all pissed it's not Goldy.
SS: Trevor Story, Rockies. The first of three predictable Rockies nominations.
OF: Charlie Blackmon, Rockies. Very predictable.
OF: David Dahl, Rockies. Less predictable than the other 2, but happy for him.
OF: Jeff McNeil, Mets. Most amusing addition to this list, but happy he's on here.

So, what does this mean? What analyses can we make from these rosters? Well, look. Of everyone, the teams with only one representative are the Tigers, Orioles, Blue Jays, Mariners, Royals, Athletics,  Marlins, Pirates, Phillies, Giants, Padres, Reds and Cardinals. That's 3/5ths of the NL Central, the most competitive league in baseball, and every California team not based in Los Angeles. Also interesting to note that the White Sox, who are 38-42, have 3 nominations, while the A's, who are 45 and 39, have only one. There's definitely a lot of imbalance (I refer you to the Philadelphia Phillies).

There also doesn't currently seem to be many nominated players on the disabled list, though Hunter Pence's activation is tentatively scheduled for Wednesday. There will be the obvious number of pitchers who will prefer to pitch the sunday before rather than pitch an inning in the ASG, so there will probably be a nice amount of disappointing replacements, but I do wonder if this will lead to a 2017 scenario where a team has 0 nominations after replacements, and...nobody does anything about it.

Overall, I'm fine with these rosters. A few inspired picks, but nothing that really made me mad (save for the lack of representation for a second-place Phillies team). Now, let's see how much of these stay intact over the next few weeks.

Coming Tonight: A startling, perhaps maddening, infield omission by the NL team. Dave Roberts, you should be ashamed.