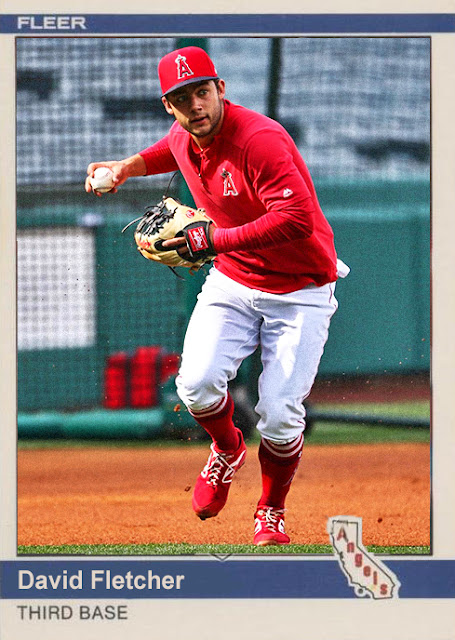 I'm liking this trend of rookies who come in and instead of hitting 20 home runs and doing the power thing, they just get 100 hits, beef up their batting average, and just...play baseball like it's supposed to. Mid-year last year we had two of those, at least two that immediately come to mind. One is New York's Jeff McNeil, the other's Anaheim's David Fletcher.

Fletcher is cool, in that he fits right along with the big guns in LA, like Andrelton Simmons, Mike Trout and Tommy La Stella. The Angels, while they do have a 30-home-run guy with Trout, do emphasize the RBI and contact ball. It doesn't always work, but their wins are well fought. And while guys like Justin Bour fail to grasp the concept, Fletcher has been leading all non-Trout Angels in hits, doubles and batting average.

Fletcher, who hit his stride around May, is now thankfully watching the rest of the team hit their stride around now. I mean, Friday night was enough of a sign that the Angels might be competing this year, with an unprecedented combined-no-hitter and subsequent clobbering of the Mariners. We're seeing the returns of Andrelton Simmons, Shohei Ohtani and Justin Upton, and they're all playing pretty damn well. We're also seeing the transformation of Kevan Smith into a starting catcher again, in order to cover for Jonathan Lucroy, and he's been hitting pretty well since getting the gig.

Heck, Trevor Cahill and Matt Harvey are both back from the DL...as are their bloated ERAs. Thankfully the Angels are trying more openers, and that's been going well, as more and more relievers are getting the chance to get time early, while people like Felix Pena, Noe Ramirez and, yes, Cahill, are doing the long-man work in the middle. It may have been the Rays' strategy, but the Angels are copying it damn well.

Will the Angels creep back on the A's-Rangers WC race? Do they have enough to rival the upper half of this crazy division? For the sake of the Skaggs family, I really, really hope so.

Coming Tomorrow- Speaking of things stolen from the Rays...
Posted by Jordan at 9:10 AM
Labels: Angels, Custom Cards, David Fletcher