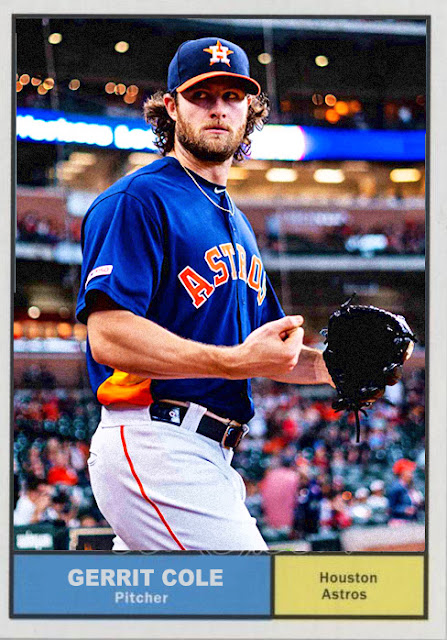 I think the most interesting part of the Astros' success, especially this year...is that none of the starting pitchers are homegrown.

Think about it. Verlander came from Detroit's farm system, McHugh was a Mets farmhand, Peacock came up with Washington and Oakland, Miley was an Arizona product, and Gerrit Cole, quite famously, was drafted first overall by the Pittsburgh.

And what I find very intriguing indeed is that with the exception of Verlander, none of these guys really hit their peak until joining the Astros. I mean, with McHugh and Peacock you can't dispute that, but...Miley had one good season with Arizona, bopped around for like 4 seasons with varying degrees of success, and finally found his footing again this year.

And then Cole...even coming into vogue during some strong years of Pittsburgh success, could never really give a consistent glimpse at his true talents there. He did have the 2015 season, where he won 19 games, hit 200 strikeouts, and helped the Pirates stay in the Wild Card race, but...other than that, he was at the mercy of the offense.

And then he gets to Houston, where he doesn't need to worry about run support, and his career reaches its apex. Last year he was unstoppable, notching 276 strikeouts, a career high, winning 15 games, and finishing the year with a 1.033 WHIP, his lowest to date. And right now he's leading the leagues in strikeouts with 196, as well as strikeouts-per-9 with 13.5. Honestly, one of the reasons why he's doing so well might be that he's not the staff ace, and he's not the #1 starter, so the pressure is slightly off, and he can do some more damage as the 2nd starter, surprise people.

The Astros have regained some of their momentum, and thanks to Cole they're still a major threat in the AL.

Coming Tomorrow- Other than Cody Bellinger, he might be the most dangerous Dodger right now.
Posted by Jordan at 10:03 PM
Labels: Astros, Custom Cards, Gerrit Cole