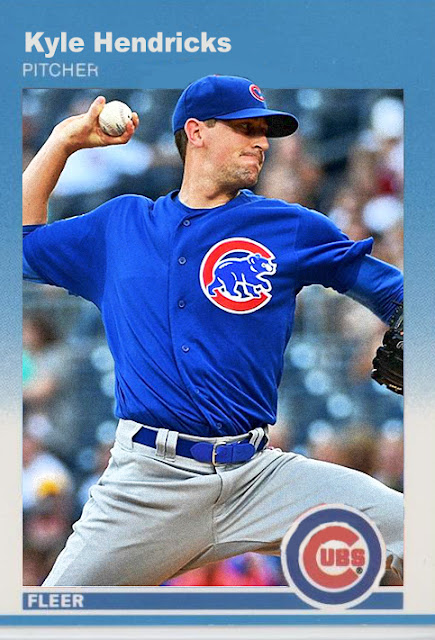 [...Well, seeing as I used a Bieber title for Shane Bieber, and a Hendrix song title for Kyle Hendricks, I guess the music pun streak is up to #2...]

...now imagine they all wound up in the same pitching rotation at that same time. How insane would that have been?

And that's why it's so satisfying that this Cubs rotation is finally working out. Once Cole Hamels gets back off the DL, which should be soon, we could be back at capacity. Until then, we have Alec Mills starting games, who's fine, but...he's no Cole Hamels. Meanwhile, the other four average 3.40 to 4.50 ERAs, Lester is 9-6 and doing his usual thing (sidenote: how come he doesn't have a stronger HOF case?), and Yu Darvish, who's already been leading the team in strikeouts, is finally starting to get his velocity together, finally notching his first win at Wrigley. I wish it hadn't taken this much time to get together, but...it's still there now.

Perhaps the one constant of this year's rotation has been the strength of Kyle Hendricks, after an insane appearance on May 3rd, throwing a 'Maddux' in 81 pitches and carrying that to a 1.145 WHIP, the lowest in the rotation. Hendricks is flirting with some major dominance this year, and despite occasional shakiness he's still a needed tool in Chicago, and he's definitely gonna have more great starts further down this stretch.

The Cubs currently have 1st place, but must fend it off from incoming scoundrels from St. Louis. Hopefully they can do so gracefully.

Coming Tonight: The Yankees have reportedly gained interest in this dangerous starter from Texas. Knowing what he's been up to lately, I'd be all for seeing him in pinstripes.
Posted by Jordan at 9:01 AM
Labels: Cubs, Custom Cards, Kyle Hendricks