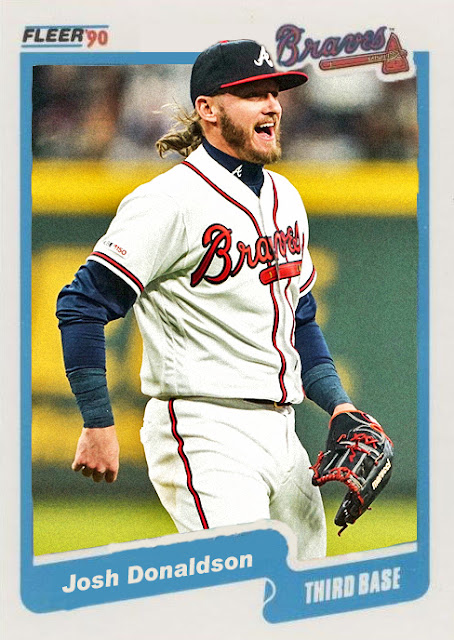 How's about this comeback season?

Josh Donaldson was worrying me, in that I was getting worried he'd never be able to get back to his Toronto numbers after some injuries, and I kept thinking he was just gonna mellow out and not get back to MVP caliber stuff with Atlanta, even if he was a perfect fit for their offense.

I mean, thankfully that's all unfounded, because...Donaldson has a 3 WAR, 22 home runs, and he's part of an ensemble of Braves hitters that are dead-set on repeating in 2019.

You look at this lineup, and it's one that's remained pretty intact since about May, with only Austin Riley and Brian McCann making less than 60 games so far. Only Markakis and McCann have less than 10 home runs, nobody has an average lower than .250, only one hitter has over 100 strikeouts, and it's Ronald Acuna and his ASG-caliber play, only Donaldson, Riley and McCann haven't hit 100 hits yet, and Freddie Freeman is already at 76 RBIs. And it's July.

And this is one of those teams where even the bench is tough. I knew Culberson would be back to his old tricks, but even Johan Camargo, Matt Joyce AND Tyler Flowers have been sensational off the bench. There's only one hitter on this team who's been relegated to the 40-man, which means everybody else is hot AND healthy.

...I mean, the pitching's a bit more problematic, and you have people like Arodys Vizcaino, Jonny Venters and Jesse Biddle who had to be swapped in order to fix the bullpen (Anthony Swarzak has helped). And you had to go through Mike Foltynewicz and Sean Newcomb having starting problems, and Bryse Wilson not being ready yet, in order to get to Max Fried and Mike Soroka getting their numbers, and Dallas Keuchel finally getting his ERA below 4. Now we're at the point where the rotation is pretty set, the bullpen will be solidified with one or two more deadline deals, and Alex Jackson could close big games.

The Braves could be the sleeper playoff hit that we're not paying attention to because we're so blinded by the Dodgers. As indestructible as LA looks, the Braves have a killer lineup, they've fixed their pitching, and...they're hot. And if they stay this hot the rest of the year, it'll take something huge to stop them.

Coming Tonight: It says something about a player if they're still listed as a team hero and a trusted asset their first three years...and then NOW they're having the best season of their career. Like, it makes the previous seasons, where they were still good, look diminutive by comparison.
Posted by Jordan at 9:42 AM