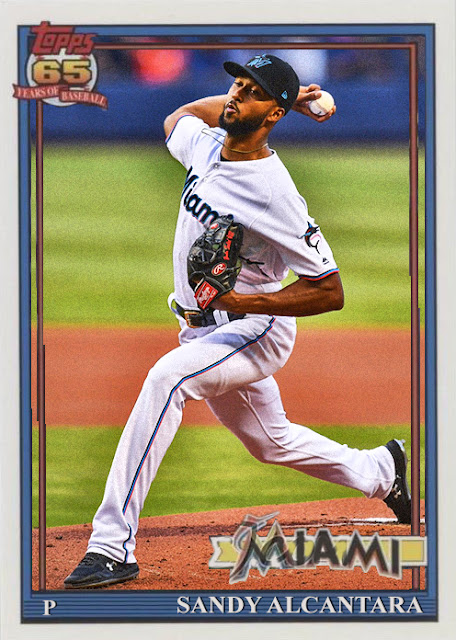 So, while the Marlins are still in last place, you can still make the claim that...for the first time since the contract-dump of 2017, they seem to have a full team again. Like, there are concrete people at positions, and the team feels more...concrete than it did last year, when everybody was just getting a go.

You could also argue that a lot of this season's success has to do with those trades they made in 2018 (and 2019) in order to lighten the load. How, you might ask?

-Giancarlo Stanton for Starlin Castro. Because the two prospects haven't prospered yet, this is the most obvious one. The Marlins lost their star outfielder, got a second baseman that can still hit. No complexity here.

-Marcell Ozuna for Sandy Alcantara, Magneuris Sierra and Zac Gallen. Now we start to see what I mean. At the time, Sierra was the big draw, hitting .317 in 22 games with St. Louis, while Alcantara had been used in relief. Now, Sierra is the team's unofficial ace and ASG standout, Zac Gallen has 21 strikeouts and a 4.24 ERA in 4 starts, and Sierra is still stewing in the minors. For a guy who is currently injured and a bit more one-dimensional, this is looking like a good deal.

-Christian Yelich for Lewis Brinson, Monte Harrison, Isan Diaz and Jordan Yamamoto. At the time, Brinson was the big draw, but seeing as the guy can't seem to hit well outside of AAA, we're left with the other three as the draws in exchange for the reigning MVP. And so far...on the strength of Jordan Yamamoto alone, this is still looking like an even trade. Yamamoto has been ON FIRE so far, with a 3-0 record, 30 strikeouts and a 1.24 ERA in 5 strikeouts. Harrison and Diaz still look like good prospects, too.

-Dee Gordon for 3 prospects. Well, neither Dugger, Torres or Neidert are doing well in the minors right now, so...Gordon still has this one.

-Justin Bour for McKenzie Mills. Mills, who was also traded for Howie Kendrick, is wobbling along in the minors...of course, so is Bour, So even.

-JT Realmuto for Jorge Alfaro and Sixto Sanchez. This may have been the last piece. Alfaro is a solid professional catcher who has been playing everyday, and Sanchez is a few years away from being the latest professional hurler for Miami.

So...from that cluster of trades, they landed three surefire aces, an everyday second baseman, an everyday catcher, some outfield help, and their eventual ace. That's...not bad. Perhaps I'll check back in a few years to see if this continues to age well.

Coming Tonight: He has 25 home runs right now, and you probably had no idea.
Posted by Jordan at 9:39 PM
Labels: Custom Cards, Marlins, Sandy Alcantara