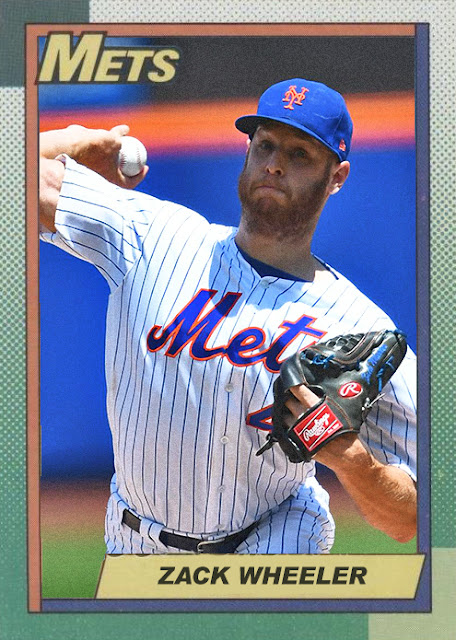 This is the kind of trade deadline where trumpets blare and alarms sound over a reliever getting traded to the Braves. Like...wow. Breathtaking.

Unless everybody just goes tomorrow, which is likely but chaotic, then it's gonna be one weak-ass trade deadline. This is good for Topps, because that means they don't have to make too many late-addition photos to Update, but bad for me, because I kind of love these wild deadline deals.

Take Zack Wheeler. Any other year, he'd be gone like a week ago. But because so many people have been wishy-washy about whether or not they want to go, his case is suffering. The Mets are now looking to move Syndergaard instead of Wheeler, as Syndergaard has had more prevalent, and better, numbers recently. Wheeler is officially back from the IL, but now his ERA has dropped to 4.47, and he's got one more loss than Thor. If Thor leaves, Wheeler's numbers could improve, but...is that the way we risk it?

I do think it's very somber that this trade deadline involves siphoning off the members of the once-proud 2015 rotation. Wheeler or Thor could go. Possibly deGrom. Matz is injured, and Harvey's a free agent. I don't know how much longer we have with these guys on the Mets, now that they're getting guys like Stroman to be strong starters.

I just want something to happen. Zack Wheeler is having a great season, and I'd hate for him to not leave the Mets if he's making an effort to.

Coming Tomorrow- I'll be at Cooperstown for a bit, so this will be tomorrow night (I think), but probably a Royals breakout.
Posted by Jordan at 9:59 PM
Labels: Custom Cards, frustration, Mets, Zack Wheeler