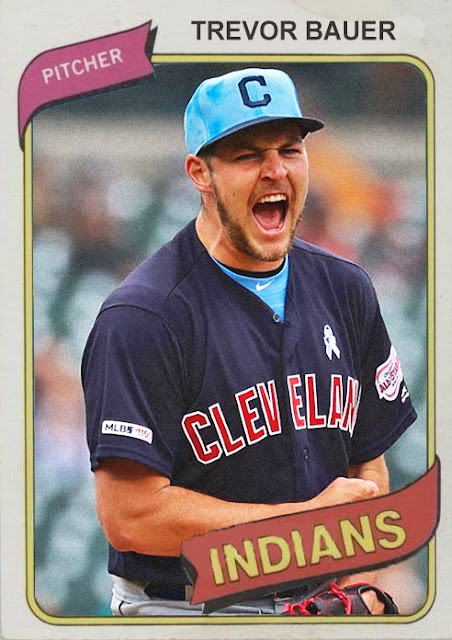 Let's just...glance at the 2016 Indians rotation for a moment. Y'all remember it by heart. Corey Kluber, Carlos Carrasco, Trevor Bauer, Danny Salazar, Mike Clevinger and Josh Tomlin. Now, let's look at how their 2019 seasons have gone:

Kluber: out til August
Carrasco: out til August?
Salazar: no timetable
Tomlin: relieving in Atlanta
Clevinger: on and off the DL
Bauer: ...well, he's been great, for starters...

Look, the Indians needed an ace, they had Bauer, and while his numbers are slightly down from his monster 2018, he's still been dominant as hell, with a 7-6 record, 140 strikeouts and a 3.70 ERA, which isn't bad at all (considering what Kluber was doing before the injury). And thankfully the farm system has coughed up enough fantastic arms that he's not alone, as Shane Bieber, Zach Plesac, Adam Plutko and Aaron Civale (WHY DID THEY DEMOTE HIM AFTER THAT START???) have been backing him up admirably, providing a cheaper-but-still-dominant rotation. Plus, now that Clevinger's back, he's been doing pretty damn well. It's just...you've got to get him off the IL for a prolonged period of time.

Also, while the 2018 team was stopped by an atrocious bullpen, this year's band of relievers doesn't have anyone with an ERA over 5, and have some fantastic performers thank to Nick Wittgren, Oliver Perez, Adam Cimber, Tyler Clippard and closer Brad Hand.

Oh yeah, and the lineup has improved as well. Who'd have thought Roberto Perez would become the most underrated catcher in baseball? Dude's rocking a 2.0 WAR. For a guy I thought would be a professional backup, he's doing pretty well. I'm also liking that Oscar Mercado has completely absorbed Leonys Martin's place in the lineup, and he's doing a bang-up job of it. This lineup doesn't have the undeniable pop of the 2016 team, but having Jake Bauers, Carlos Santana and Francisco Lindor all hitting isn't bad either.

It'll be nice to see what this team turns into after the ASG. They could make a run.

Coming Tonight: Still have a Cubs shirt with this guy's name on the back.
Posted by Jordan at 9:12 AM