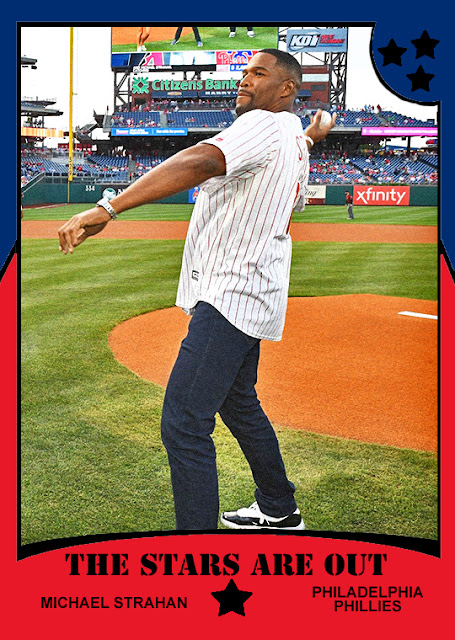 Told you I wouldn't keep these til the middle of the month again.

This is another assortment of cards from my ever-expansive process to document celebrities and generally famous personnel throwing out first pitches, or just generally existing, on baseball fields. All of these were taken in June, though a few stragglers from June are being saved for tomorrow, for a special occasion.

Normally with Stars are Out, you get a window into what the selected person's favorite MLB squad is. Here...it's not the case. Having worked with Michael Strahan once, a long time ago, I know for a fact he's not gonna drop his allegiance to the Giants for nothing. So this...odd picture is a result of the Good Morning America crew's traveling summer showcases, where they pop up in a different US city every once in a while and do the show there. In this case, they wound up in Philly, and after a bit of catching up with his former rival John Runyan (who I have also worked with), Strahan showed up at Citizens Bank Park, adorned in a Phils jersey, and threw out a first pitch. Odd-looking, but hella cool. 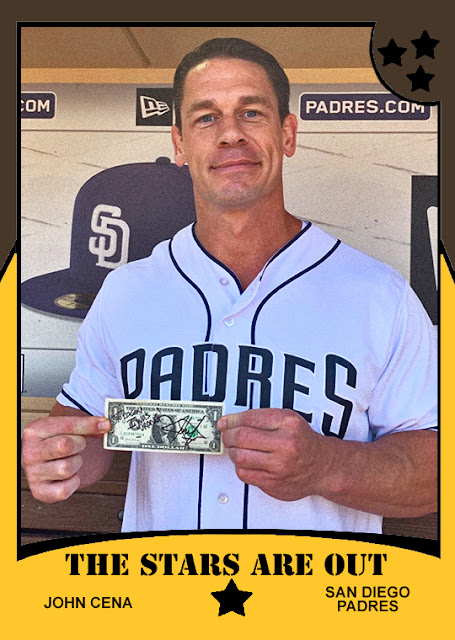 If we're talking about sports-stars turned media personalities, might as well show this one. Apologies if any of you can't see this one.

That over...uh, I'm gonna guess he's towards the center of the photo, is John Cena. Perhaps you may have heard of him. As someone who's not really into the WWE, even I knew about the unstoppable media force that is John Cena, even before he actually became a comedy mainstay and rocked Blockers out of the park. I didn't know of his Padres allegiance, though he was there for a special reason: Logan Allen told John Cena that he'd never make the major leagues, and Cena bet a dollar that he would. Well, on the day of Allen's MLB debut as the starter at Petco Park, Cena was there with a dollar, ever-willing to keep his end of the bargain. So that's awesome.

Damn, we're starting with two awesome stories. I don't know how I'm gonna keep this up: 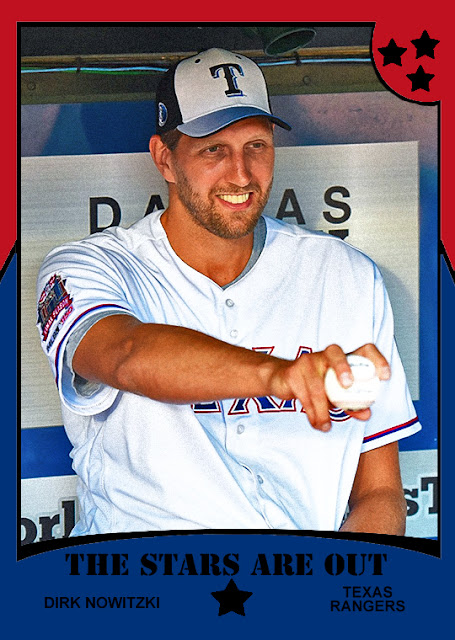 Alright, since we're on a beloved sports figure kick, here's Dirk Nowitzki, possibly the most important Dallas sports star since Troy Aikman. A year after retiring as a member of the Dallas Mavericks, he decided to show some goodwill in the Arlington area and throw out a first pitch. Look, man, even if it had bounced, they still would have loved him there. 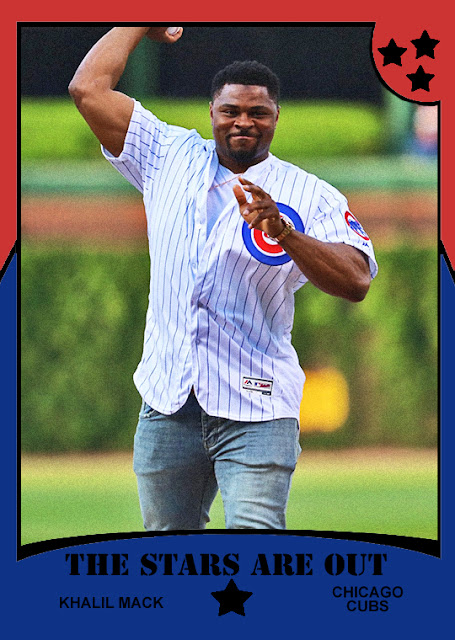 And, to round out the sporting icons section, let's bring out a custom that will make my Raiders fan father writhe in anger, former Oakland and current Chicago defensive madman Khalil Mack. Just looking at this card, I'm unnerved. This guy's gotta give Aaron Rodgers nightmares. Glad the Bears fans love him, though. 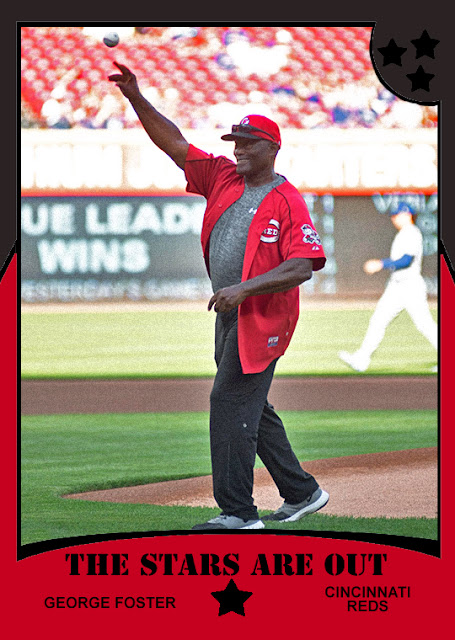 Shockingly only one former MLB player in this bunch this week, but it's a good one: the legendary Cincinnati power hitter George Foster, winner of an MVP and a bunch of other accolades during his time with the Reds. Good to see he still gets a ton of applause in GABP these days. 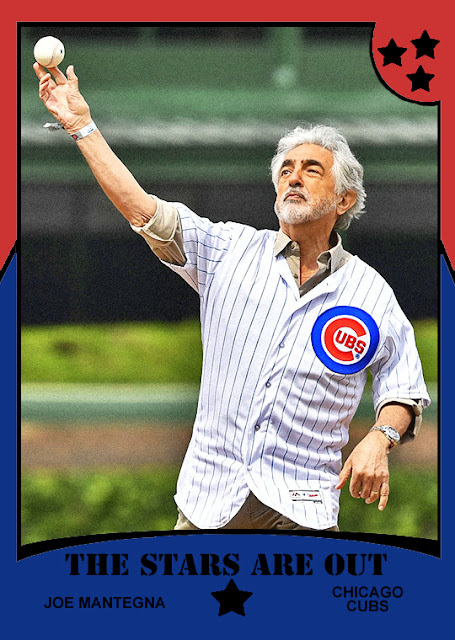 Now, onto your standard-issue celebrities.

Joe Mantegna, despite playing a lot of wiseguys on film, has become a fairly respectable figure in the media, with some solid work on Criminal Minds. Plus, apparently he's a super nice guy (friend of mine's friendly with his daughter), and, of course, as a part-time Bill Swerski, he's a diehard Chicago sports-fan. So he's always welcome at Wrigley, though I still think he's got a soft-spot for either Da Bearssss or Da Bulllssss.

[Yes, I know George Wendt did it more often, but Mantegna did the first one, and he was pretty damn good too] 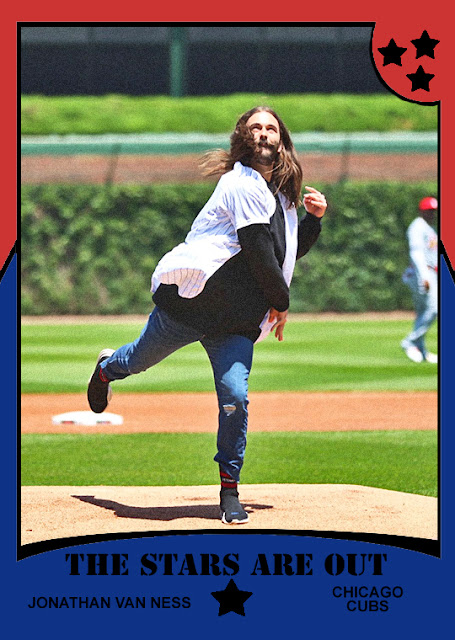 Sticking with the Cubs for a moment, we have one of Queer Eye star Jonathan Van Ness. I'm not heavily into Queer Eye, but I do know enough about it to remain culturally aware (there's Jonathan, there's Karamo, there's Tan...uh...crap, I thought I knew the other two...). Jonathan's probably the most commonly known of the fab five, so at least the average Cubs fan might recognize him...I think. 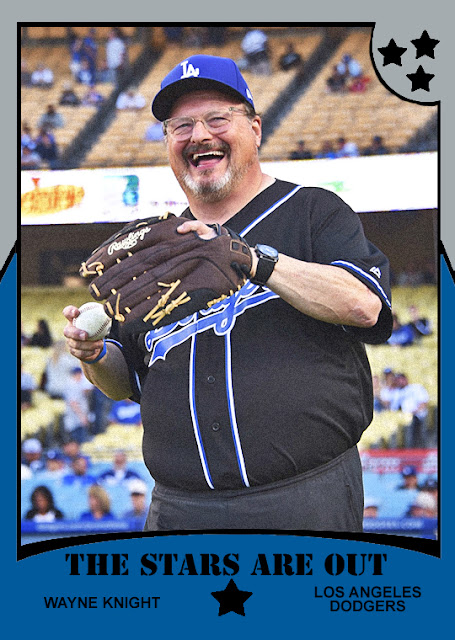 This one's kinda cool to me, because as someone who grew up in the 90s, pretty much everything I watched back in the day had Wayne Knight in it. Off the top of my head, he did the Buzz Lightyear animated series, he was a character on 3rd Rock from the Sun, he was in Space Jam, Jurassic Park, My Favorite Martian...and yes, he was Newman on Seinfeld. He's just one of those ubiquitous pop culture figures of his time that you can't help but enjoy. I kind of love his black Dodgers uniform here, too. Very rare. 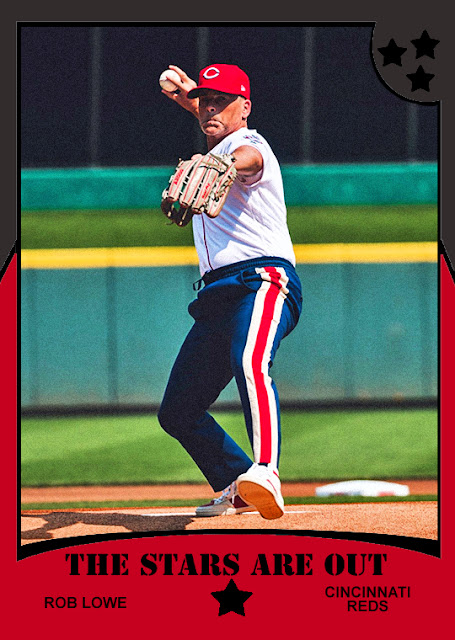 Moving from Newman to Sam Seaborn, here's Rob Lowe. Lot of heavy-hitters in this post.

I had no idea Lowe was a Reds guy, just like I had no idea Bruce Willis was a Phils guy. Still, Lowe, now almost completely grey, made a nice showing in Cincy. I forget if he was promoting anything, but maybe he was under the pretense that if he didn't, Parks and Rec would do a reunion. 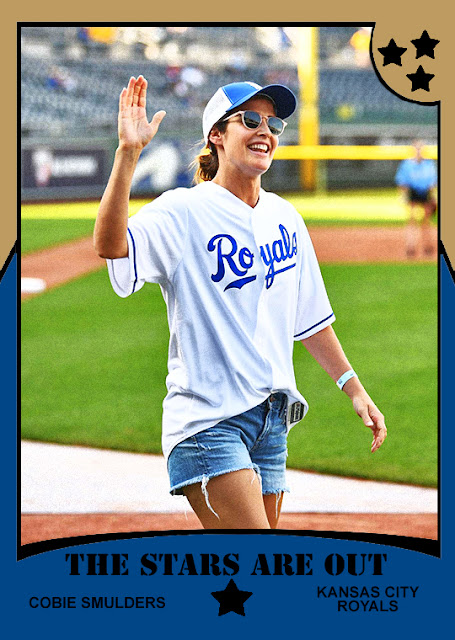 Still, the most lucrative platform for celeb baseball photos in June was the Big Slick Celebrity Softball Game, which Paul Rudd and pals (would that make them pal rudds?) do an exhibition game for charity. Rudd usually gets a bunch of big name people for this game, and Cobie Smulders, aka Robin Sparkles, aka Maria Hill, aka Mama Quagmire, aka...idk, insert another one here, was one of the old standbys. I think her husband, Taran Killam, might have also been there too. 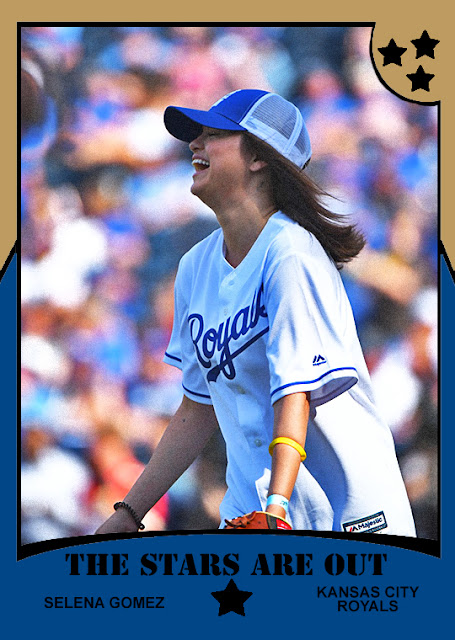 Perhaps the most surprising get in this was Selena Gomez, actual popstar. Like...does Paul Rudd hang out with Selena Gomez? I don't know what happened there, but I'm glad she made the trip. 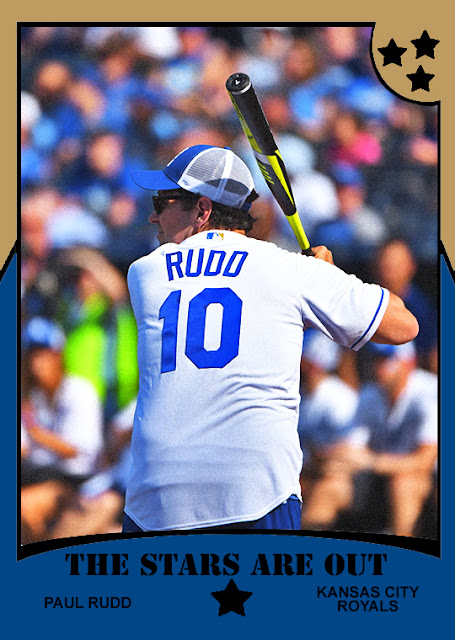 And, of course, it'd probably make sense to do one of the man himself, Paul Rudd, who's still one of the highest-earning players in Hollywood, as well as being one of its nicest guys. So glad he continues to do this fundraiser game to this day.

That's all for June, but watch the skies tomorrow for a special edition of this for an important holiday...not the one you're thinking, though.
Posted by Jordan at 2:55 PM