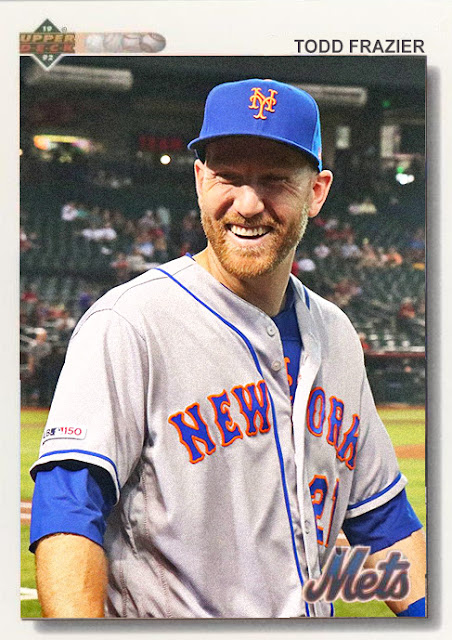 I mean, I like to emphasize that on the blog a lot because I like rooting for genuinely good people. If you're gonna go beat up somebody, especially a wife, I don't have time for you. But if you do a crap-ton of humanitarian work, or spend your career giving back to the North Jersey community that made you who you are, then I'm a fan. Or, simply, if you're nice enough to take time out of your day and sign something for a fan (another thank you to Kyle Gibson).

But yeah. Frazier's a good guy, which helps, because he's having a relatively nice comeback season in Queens.

I mean, look, it's not a complete career turnaround or anything, and it's not like he's learned to hit .300, but he's still got 11 home runs before the break, and he's hitting .256. He's also, since the departure of David Wright and the injuries of Yoenis Cespedes, a rare veteran presence on one of the youngest lineups in baseball, along with Robinson Cano. Think of the wisdom Frazier must be imparting on young hitters like Pete Alonso, Amed Rosario and Jeff McNeil. But alternatively, think of the amount of power coming from just him and Michael Conforto alone.

I like that the Mets have abandoned the whole 'carnival of 35-year-olds' mentality they had earlier on, as Carlos Gomez is gone again, and they haven't had to bring up Matt Kemp yet. Granted, they have tried to keep their pitching fresh, and attempted to throw Chris Flexen and Walter Lockett into the rotation (with no avail), but I'm honestly just happy we're getting good seasons out of Zach Wheeler and Jason Vargas.

The Mets probably won't do much else this year, but at least they're fun to watch, and at least they've got some good baseball personalities, like Todd Frazier, in the mix.

Coming Tonight: An outfielder so quick that he's been moved to shortstop due to lack of options. Which would be the sign of a last place team, except they're in third.
Posted by Jordan at 9:27 AM
Labels: Custom Cards, Mets, Todd Frazier