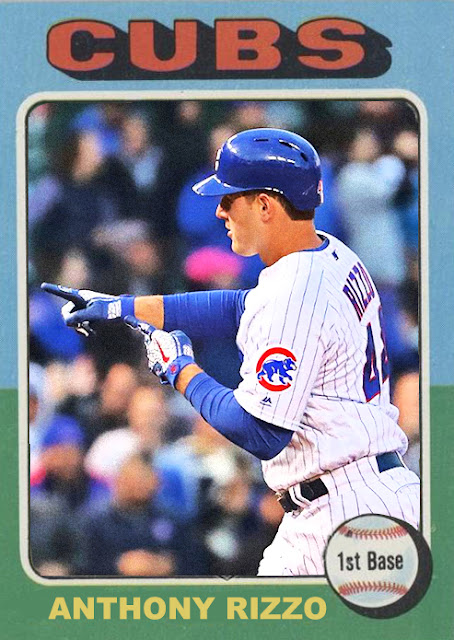 ...How about that, Cubs are tied for first as I write this.

I kinda love how the Cubs have evolved in past years. You look for a concrete star on this team, and it's usually like Javier Baez or Willson Contreras, but you have to peel back several incarnations of this team to get to a point like 2014, where the Cubs were basically just Anthony Rizzo and a pack of smokes.

Man, that year was not fun. Jeff Samardzija and Jason Hammel were the best pitchers, and they'd both be gone by July (Hammel would be back). Darwin Barney was a marquee star, and he'd be in LA by the end of the year. Starlin Castro was the team's sole attempt at homegrown youth, and even HE'D have 100 strikeouts. People like Chris Coghlan, Arismendy Alcantara and Nate Schierholtz HAD TO START. HAD TO START GAMES.

I mean, if it wasn't for Anthony Rizzo, there'd be no incentive to even GET Jon Lester and start the bandwagon. Because once he gets here, the team takes shape, and the race begins.

Rizzo is thankfully still a reliable lineup piece, and is hitting .270 with 19 homers and 52 RBIs, which is not a bad half-year stat. The one worrying detail I've noticed about him is that since the team's been packed with more competent players, some of his stats have faded into the background, and his numbers really aren't as special as they used to be. But...Ryan Zimmerman's numbers weren't the best ones during the Nats explosion, and he's still a great player. Hell, Rizzo's probably a better player than Zim, if we're being honest.

Rizzo's still a huge part of this team, which has bounced right back into 1st place, and is in a great spot for a half-year position. They'll almost definitely be a part of the playoff position, and I hope they continue their good luck.