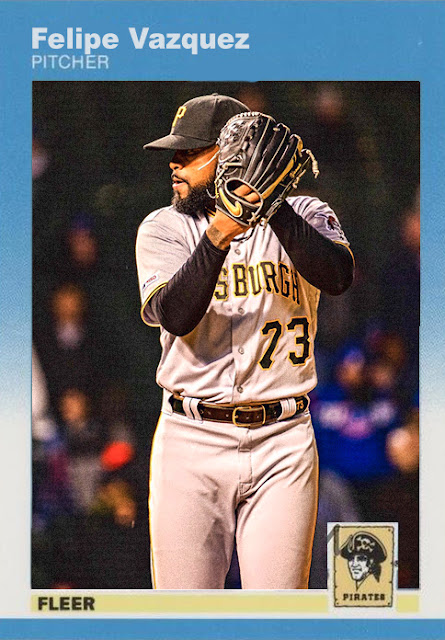 We're heading into the heart of the most indistinct trade deadline season in recent history. There are names that could be traded, but might not, the big names on the board will only be good for temporary rentals, and unlike last year, there doesn't seem to be a gigantic piece on the board that everyone's gunning for. And the burgeoning stretching of names into the mix is annoying even people that could be safe, like Mike Minor, who told reporters he's sick of trade talk last night.

Arguably the biggest piece that could go is Felipe Vazquez, and the Pirates' ownership isn't expressly stating whether or not he's actually going to be traded.

The Pirates have come to terms with their status as non-competitors, and are currently the fourth-worst team in the NL, behind the Mets, Reds, and (surprise surprise) Marlins. They have a ton of good energy this year, but considering that Corey Dickerson and Jordan Lyles are also being shopped to teams, it's the kind of energy that can continue to exist with young, less-contractually-obligated players next year. So far this season we've seen Kevin Newman, Bryan Reynolds and Dario Agrazal come into their own after being called up, and with Josh Bell, Adam Frazier, Joe Musgrove and also kind of Starling Marte (his contract's up next year) running this team, you can see the youth taking over.

...So where does that leave Felipe Vazquez? He's 27, so he's not exactly a member of the youth movement. In 3 seasons as closer, he's saved 79 games and has a 2.13 ERA. Let's briefly compare that to the guy he was traded from Washington for, Mr. Mark Melancon, now slumming it in San Francisco. Melancon, in 3.5 seasons with Pittsburgh, saved 130 games, and had a 1.75 ERA

...where was I going with this analogy?

Possibly here: Felipe Vazquez is a good closer. He's been lights out the past two seasons. The numbers comparisons either mean that Melancon was a better closer (which is...debatable), or that Vazquez just played on worse teams with less save opportunities (Melancon had 14 blown saves, Vazquez only had 8, and I don't know if that speaks to ability or circumstance).

So...Felipe Vazquez' abilities are at the mercy of the Pittsburgh Pirates. They will be at the mercy of whatever team he plays for. He's not an 'I decide who lives or dies' closer like Kenley Jansen or Brad Hand.

The difference is that Mark Melancon never found another fit quite like Pittsburgh, and has still been searching for his prime numbers, perhaps because they only existed when he was in a semi-competitive, power-friendly city like Pittsburgh. But Vazquez, pitching for a less-powerful Pirates team, may be wasting his best numbers. I'm getting the sense that a lot of the teams that want to trade for him would rather use him as a set-up man than a closer (though Minnesota, Tampa Bay, Texas and  Atlanta could all use upgrades...and possibly Philly now that you mention it), but Vazquez closing for a team that could really USE him? That could be scary.

I love Felipe Vazquez, and I love the Pirates, but...if they don't trade him, he may never become the closer he's truly meant to be.

Coming Tonight- Speaking of people Pittsburgh mercifully let go, this one's blossomed completely, becoming one of the most powerful strikeout artists in the AL.
Posted by Jordan at 11:22 AM
Labels: Always Be Closing, Custom Cards, Felipe Rivero, fun with statistics, Mark Melancon, Pirates