Baseball season is finally upon us, at least for teams that are not the Mets and Nationals, and we're already beginning to see the picture of how the 2021 season might go. But we still have plenty of 2020 Final Edition posts to go before we've entirely put the 2020 season to bed. Here are 9 more cards from it: 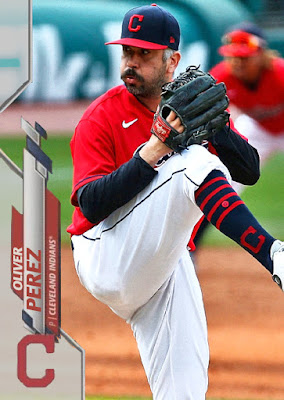 Card #118- Oliver Perez, Cleveland Indians
One of the most unexpected career second acts of the modern era, Oliver Perez went from a trusty starter with the Padres and Mets in the 2000s to a relief weapon for the Cleveland Indians. Since 2018, Oliver has sported a 2.67 ERA in 139 appearances, notching 105 strikeouts in that time. It's clear that Perez is still capable of keeping down a lineup, even at 39. Last season was another strong one for Perez, with a 2.00 ERA in 21 games. As he's signed for another year in Cleveland, I hope his excellent work keeps up. 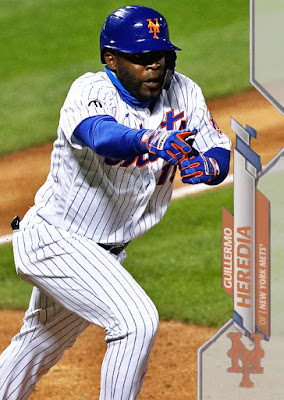 Card #119- Guillermo Heredia, New York Mets
After beginning the season with the last place Pittsburgh Pirates, former Mariners outfielder Guillermo Heredia found himself with a bit of an upgrade, as the Mets waived him in August. His numbers improved slightly, as he bat .235 in 7 games with 2 homers. Due to the crowded Mets camp, Heredia was tossed to Atlanta before the start of the 2021 season. 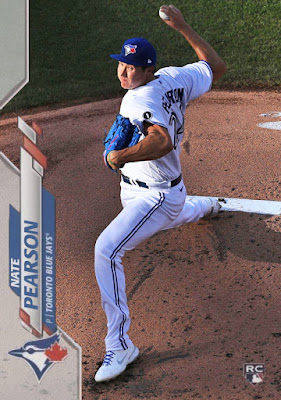 Card #120- Nate Pearson, Toronto Blue Jays
In a season where anybody in what would be the minor leagues could be fair game for a call-up, Nate Pearson spent a year where he could have been playing for the Bisons in Buffalo...playing for the Blue Jays in Buffalo. Same location, different stakes. Pearson would be in charge of helping the Jays to the playoffs in the early part of the season, but in 5 starts he proved he may not have been 100% ready, with a 7.50 ERA in that time. The Jays are looking to ease Pearson in a bit more carefully this season, so hopefully the numbers will reflect that 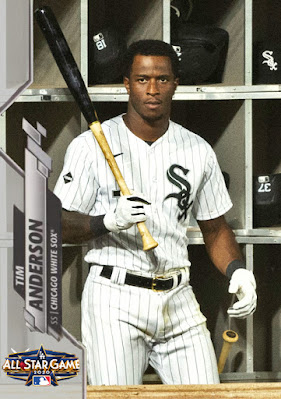 Card #121- Tim Anderson ASG, Chicago White Sox
In a supposed 2020 All-Star Game, Tim Anderson would have been the starting shortstop for the AL. It would have been the culmination of several breakout years for TA7, and it would have commemorated his second consecutive .300+ year, and his year of getting a silver slugger and MVP votes. But, unfortunately, Anderson is still searching for his first All Star Game appearance, and hopefully he'll get there this year, wherever it may be. 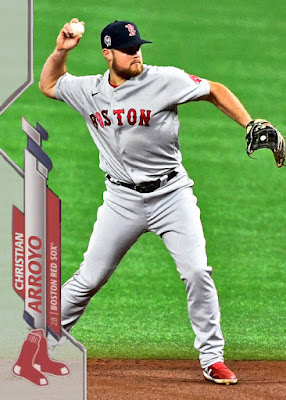 Card #122- Christian Arroyo, Boston Red Sox
A former infield prospect who had bobbed around the Giants, Rays and Indians organizations unsuccessfully, Christian Arroyo may have finally found a substantial home in Boston. In 14 games at 2nd, Arroyo hit .240 with 8 RBIs including 3 homers. It was in the midst of a year where the Sox used people like Yairo Munoz and Jonathan Arauz in big positions, and all three of them did well amidst the chaos. Unfortunately, the starting second baseman position in Boston seems to belong to Enrique Hernandez now, so Arroyo may have to fight for bench relevancy. 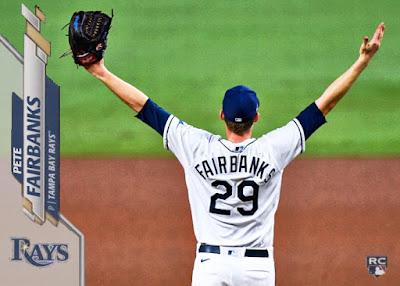 Card #123- Pete Fairbanks, Tampa Bay Rays
One of the many rookie relievers utilized during the Rays' blockbuster 2020 year, Pete Fairbanks was a former Rangers farmhand who came over in exchange for Nick Solak at the previous trade deadline [in hindsight that may have been slightly lopsided in favor of Texas]. Fairbanks still went off to quick work in Tampa, with a 2.70 ERA in 27 games, 39 Ks and a 6-3 record, plus SEVENTEEN POSTSEASON STRIKEOUTS. Granted, he did give up some important runs to the Dodgers, but he was definitely one of the biggest pieces of the Rays' pen last year. Hopefully his power streak continues this year. 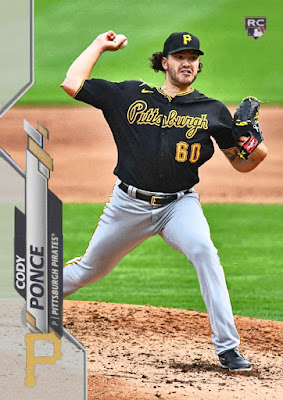 Card #124- Cody Ponce, Pittsburgh Pirates
In a year where there were so few rotation options, a lot of otherwise unneeded pitchers got a chance to start games. Enter Cody Ponce, a rookie that had come over in exchange for Jordan Lyles the previous year, who could start games...so in he went. In 3 starts, he had a 3.63 record with 9 Ks- not perfect, but decent. Not sure where he stands in line to start this year, but he could show up. 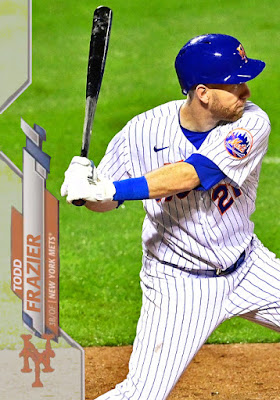 Card #125- Todd Frazier, New York Mets
Speaking of people who could theoretically show up in Pittsburgh this year, Todd Frazier is coming off a very frazzled 2020, split between Texas in New York. Frazier was dealt to the Mets to help with a potential playoff bid, and he got back to what he does best...hit for power, not for contact. So a .224 average with 2 homers and a boatload of strikeouts followed, and the Mets didn't make the playoffs. Womp womp. Frazier's still technically signed to a deal with the Pirates, but I'm not sure if they'll need him at all this year, unless things get REALLY dire. 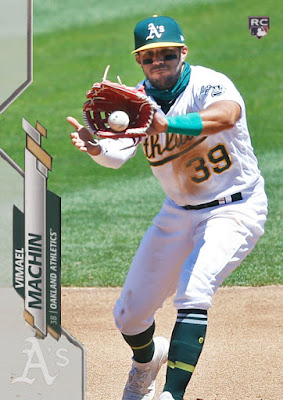 Card #126- Vimael Machin, Oakland Athletics
Before Jake Lamb was handed the starting 3rd baseman gig in Oakland, there was still a void between Lamb was signed and Chapman got injured, and that void, plus earlier backup gigs, were filled by Vimael Machin, a rookie journeyman who was just jazzed to be in the bigs. Machin's .206 average and minimal plate work put him a bit below replacement level [hence Lamb], but he does look to be a factor into the A's 2021 endeavors. He could be a handy backup infielder for all we know.

Monday we get 9 more cards of this. Some of the most intriguing rookies of last year are in here.