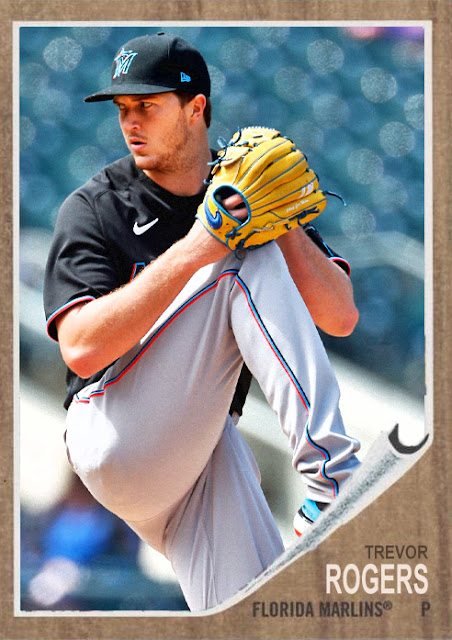 To all the sportswriters who said the Marlins would be a last place team this year I say 'HA!'. They're gonna be a FOURTH PLACE team this year!

I mean, there is a chance that they could climb higher in the standings if the Braves or Phillies screw up, but with the Nats a bottom-feeder for sure, and with the Marlins on okay shores right now...this is the way it might be this year. Apologies to all the playoff-hungry Marlins fans that showed up last year, but this may be what we're dealing with.

And yet pieces of this team seem to be indicating promise. As if this team could actually amount to something this year. Jazz Chisholm, Jesus Aguilar and Miguel Rojas are all hitting really well right now, and Rojas is doing the sort of team-leading thing that Brian Anderson was doing last year. Starling Marte, while not exactly at team-centerpiece mode as he was last September, is hitting decently [at least he was before he landed on the DL]; so is Adam Duvall. And Pablo Lopez, Trevor Rogers and Sandy Alcantara have made a pretty impressive top-3 rotation combo. In fact, through five starts, the young Rogers has the best numbers, the most strikeouts with 38, and the lowest ERA with 1.29. I bet nobody thought he'd be outdoing those other 2.

And yet aside from those highlights, this team is a little shallow. Injuries have robbed the team of Marte, Anderson, Jorge Alfaro, Elieser Hernandez, and we're getting people like Chad Wallach, Lewis Brinson and Ross Detwiler in crucial roles. The bullpen is laden with guys who can't keep runs down. Usual supplier of power Corey Dickerson just hit his first home run last night. Chisholm and Duvall are striking out like mad. The depth and sneaky versatility of 2020's team is missing, it seems.

It could definitely show up. I mean, we're really waiting for Wallach and Jon Berti to get to last year's bench averages, and for a few wild bullpen pieces to show up. But I can say with certainty right now that there are three teams better than the Marlins, and for that to change, the Marlins need a lot of pieces to come together. So it may be a tough stretch for them.

Coming Tonight: I never took him seriously with the Nationals. And now he seems to be begging me to take him seriously in Kansas City.