180 cards in and these 2020 Final Edition cards are still fun to post. Lot of interesting cases, lot of impressive stories. Lots that factors into the 2021 season as well. Onto another 9 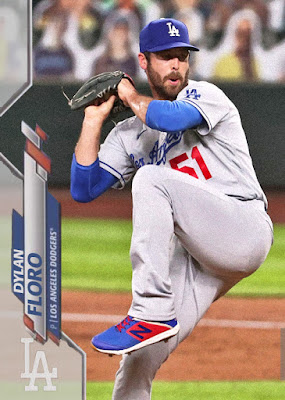 Card #181- Dylan Floro, Los Angeles Dodgers
Dylan Floro first came to prominence as a trusty relief option in Cincinnati before being traded to the Dodgers at the deadline. Floro quickly became an under-the-radar relief talent for the Dodgers, especially during their championship season last year. During the regular season, and 25 games of play, Floro had a 2.59 ERA with 3 wins and 19 Ks, then struck out 7 in the postseason despite being a bit more hit-friendly against the Rays offense. Floro is now a relief option in Miami, and so far he's been doing extremely well. 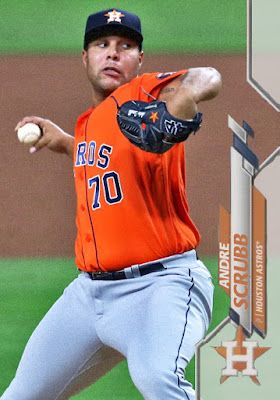 Card #182- Andre Scrubb, Houston Astros
2020 was a year where, despite still being relied upon as a threat in the AL West, the Astros needed to rely on a lot of rookie talent. Enter rookie reliever Andre Scrubb, with a cut-and-dry delivery and an imposing stature. Through 24 innings, Scrubb had a 1.90 ERA and 24 Ks, plus a 1.0 WAR, and was similarly lights-out in the postseason. Scrubb's particular and controlling ways have been missed in the past month of Houston baseball, but Scrubb will hopefully be off the IL relatively soon. 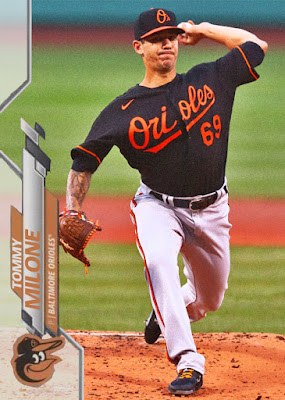 Card #183- Tommy Milone, Baltimore Orioles
This will be a good fun fact in about ten years- Tommy Milone was the Orioles' Opening Day starter in 2020, despite the rotation having John Means, Alex Cobb and Jorge Lopez. Milone was heavily relied upon in his month of Baltimore tenure, and posted a 3.99 ERA in 6 starts, despite a 1-4 record. He was rewarded for his decent numbers with a trade to Atlanta, at which point his numbers ballooned and an injury paved the way for Bryse Wilson. Now he's pitching in relief for the Blue Jays 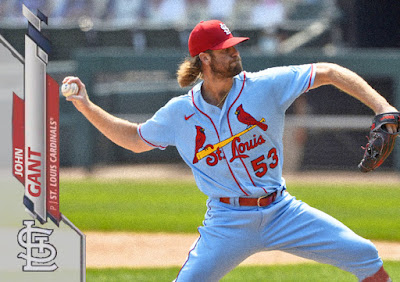 Card #184- John Gant, St. Louis Cardinals
John Gant has been one of those names that's been around the Cardinals pitching staff for a few years now and yet hasn't really had many huge moments yet. 2020 was something of a prelude though, as the right-hander continued his bullpen dominance from the previous year by having a 2.40 ERA in 17 games, and proving himself as a consistent option in a season of inconsistency in St. Louis. The ploy worked- Gant is now a trusted starter for the Cards, and has been strong in 4 starts so far. 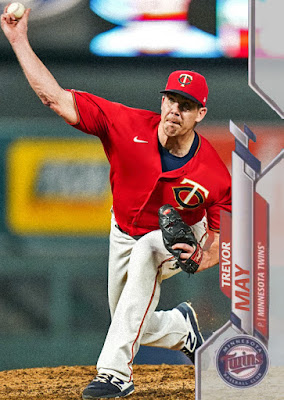 Card #185- Trevor May, Minnesota Twins
I already gave you Tyler Duffey, one of the Twins' perennial relief masters of late, a few posts ago, so here's his battery partner, or former battery partner, Trevor May. 2020 was another strong season for May, with 38 Ks in 24 appearances, and a 3.86 ERA. It led to the rest of the league taking notice, and eventually the Mets had no choice but to sign him to a 2-year deal. So far he's been decent. 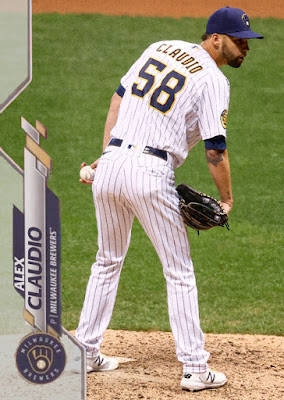 Card #186- Alex Claudio, Milwaukee Brewers
Two years removed from his long run as a member of the Rangers bullpen, Alex Claudio finished off his similarly-strong tenure in Milwaukee by being one of many trusted bullpen arms in a very odd yet competitive Brewers season. Claudio closed out 7 of 20 games, and had 15 Ks as well. His ERA left a bit to be desired, which explains why the Angels took Claudio on cautiously, but hopefully he'll get back to his Rangers numbers eventually. 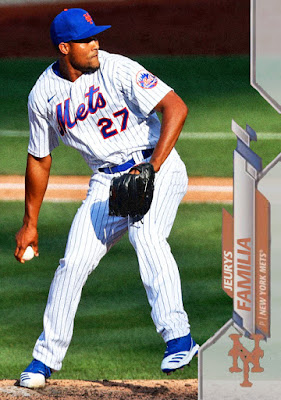 Card #187- Jeurys Familia, New York Mets
Something about homegrown relievers in New York that breed controversy. First Jenrry Mejia, then Jeurys Familia. Edwin Diaz wasn't homegrown but he's sure been divisive as well. Familia isn't exactly forgiven for his recent control issues, and his 2018 departure in search of a playoff run, but having his best year since the return certainly helps. Familia's 25 games weren't in the closing role [again, Edwin Diaz had that], but a 3.71 ERA and 23 Ks were enough to get fans back on his side, at least a little bit. Plus, he's doing pretty well once again so far this season. 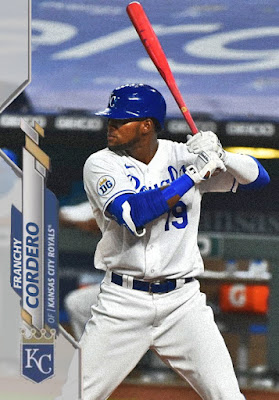 Card #188- Franchy Cordero, Kansas City Royals
Hey, a batter! One of the earliest trades of the 2020 deadline was a relatively simple one- Tim Hill to San Diego; Franchy Cordero to Kansas City. The deal worked pretty well for both parties- Hill was a great bullpen piece for the Padres, and Franchy Cordero was a major player in the race for the empty outfield spot in KC. Cordero's 16 games only yielded a .211 average and 7 RBIs, but it was enough for the Red Sox to trade for him in the Benintendi deal. Cordero is currently yielding similar results in Boston. 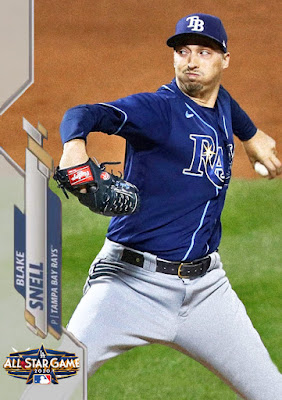 Card #189- Blake Snell ASG, Tampa Bay Rays
Realistically, if there had been an All Star Game last year, Blake Snell definitely would have been asked to be on the AL's pitching staff. It's just a matter or whether A.J. Hinch would have removed Snell too early or not.
Friday we get 9 more cards from this set. More hitters, thank the gods, and a few cool ignored sights people have been waiting for.
Posted by Jordan at 8:40 PM