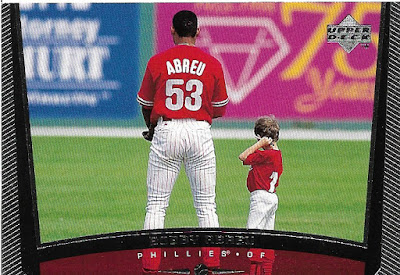 I like to stagnate out my CardBarrel orders so the people there don't think I'm a psychopath.

The Online Dime Box ones are easier, cause at most I'm just filling a Hamilton and they can do that easily. But CardBarrel is a larger database with more filing cabinets and more stuff lying around and I don't wanna tax them too often by throwing countless cards into a bubble mailer sent towards Jersey. Yes, the consumer is already right, but this consumer has anxiety.

So I wanted to make sure the iron was hot when I made another order, and judging by a lot of the stuff in this post, the iron was very hot. Being able to get this 1999 Upper Deck Bobby Abreu card, a very cute and poignant portrait of the Vet in 1998, almost made the whole thing worth it, but there's more to cover. Player Collections:
CardBarrel had a Pat Venditte MLB card I did not have. This was a problem that needed to be rectified. This 2016 Heritage issue is not the classiest Venditte card, but it is still a Venditte card, and I enjoy those immensely.
There were also some other small player-related needs I filled here. 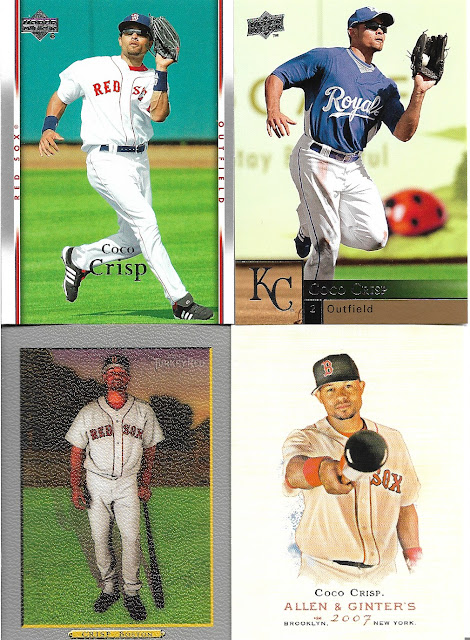 I realized recently that I have lots of Coco Crisp cards on the Indians and A's, but not otherwise. Mostly his Sox days have evaded me, so getting these cool ones helped, as did the rare Royals Crisp card from 09 UD. 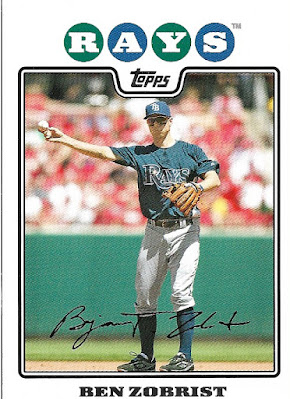 A rare 2008 Update card that fell through the cracks was Ben Zobrist's 2008 Topps issue. I feel like this one has a chance of being photoshopped from a 2007 photo? That blue jersey looks a bit green, that Rays logo looks a bit pasted on, but I've been wrong before. Still, it's a young Zo card, and a pre-fame Zo issue I didn't have 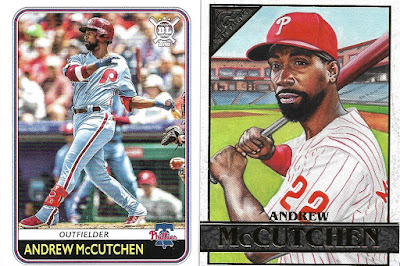 And more Phillies Andrew McCutchen cards is never enough. This was also my first taste of 2020 Gallery, which for obvious reasons did not show up on my radar during my retail quests. Looks cool, though.

And four from 2020 Heritage High Number. Didi and Wheeler were obvious Phils-related needs, but those top two I needed from the moment I realized they existed. Lucroy played maybe a game or two as a Red Sox, but CarGo didn't play ANY in Seattle. A zero year card that doubles as a sunset issue. Wild.

Set Intrigue:
This 2004 Fleer Showcase Barry Zito continues my quest for the 2004 Fleer sets I chased in my intro to collecting [detailed in this post]. They stand out in my memory, and finding new issues from them continues to really impress me. 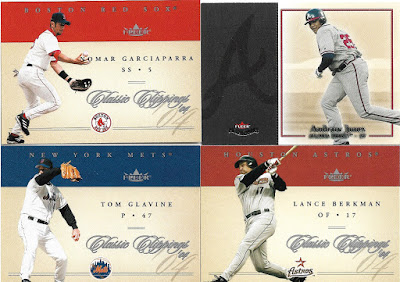 These four as well. 2004 Classic Clippings, while simple, still stands out to me, and getting some of the bigger cards, like Nomar and Glavine helped. Plus, Andruw Jones was another needed Patchworks card. 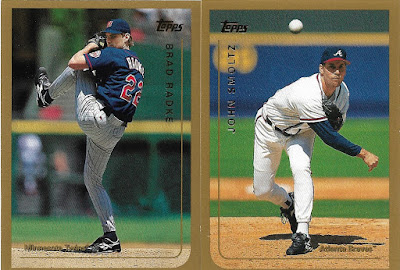 My similar quest to nab Topps base cards of all the people I collect continued as well, with two 1999 Topps issues. One easy to find, Brad Radke, the other a bit rarer, John Smoltz. 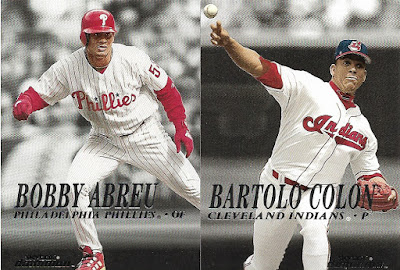 I also was piqued by a recent baseball card store dot com order that featured lots of late-90s Pacific issues to look towards Fleer's more Pacific-esque endeavors under their Skybox umbrella. So these two issues of guys I collect from 2000 Skybox Dominion made it into the cart, despite the oddness of the b/w background. 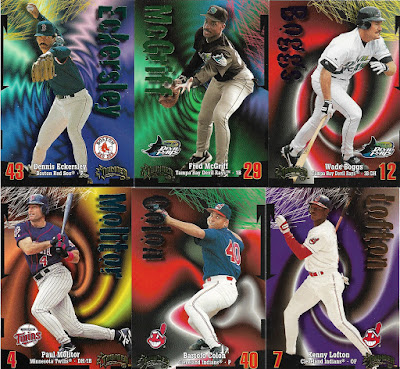 As did these...absolute oddities from 1998 Skybox Thunder. I didn't know when I scanned these that certain cards combine to create a T, so only Colon and Lofton together demonstrate this. But...man these are wild, in the best way possible. Perfect 90s-Fleer looniness. Also cool to see late career Eck, Boggs and Molitor subscribe to this. 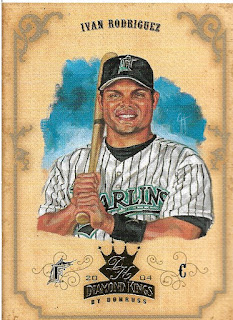 This is one of those properties I've been pilfering cards from since I started collecting. The texture, elegance and modesty of these 2000s Donruss DK sets have been something I've always respected, even after Playoff became more copy-and-paste about it after 2004. So getting a whole bunch of these felt really good, especially this 2004 commemoration of I-Rod's 2003 Marlins year. 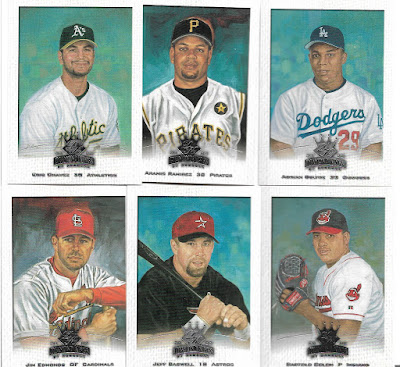 2002- Fairly simple backgrounds but good detailing all around. Ramirez' might be the best of these.

2003- I have a ton of these already so I'm just getting the stragglers, including a Yankee Ventura, and some usual suspects like Huddy and Wood. 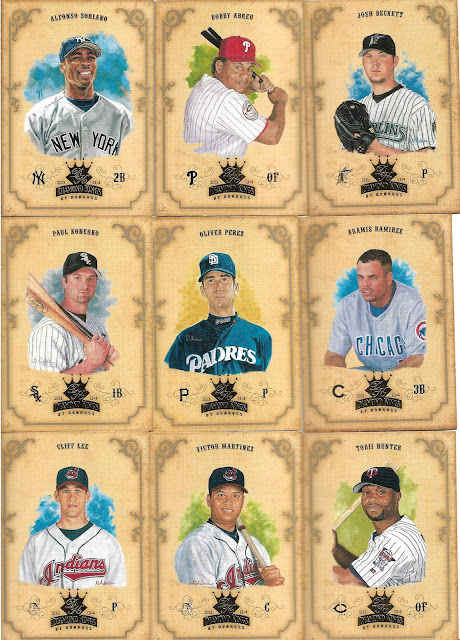 2004: Lots of variety here. Yes, some more usual suspects like Abreu and Beckett and Konerko, but Padres Oliver Perez, and baby Cliff Lee and Victor Martinez. Also, nabbing a semi-action static shot of Cubs Aramis Ramirez was a cool change of pace. 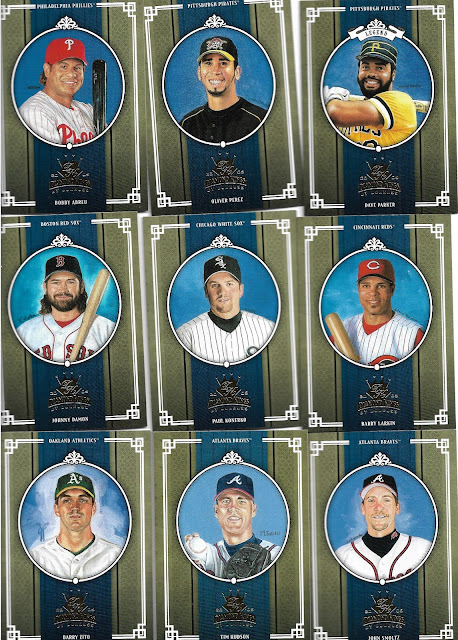 2005: Another one I have a ton of already but I still strive for more of. Hudson's is an 05 DK Update issue, so it's on slightly different stock [as Playoff were essentially closing its doors upon its release], but getting Smoltz, Larkin and that Dave Parker one were important to me. 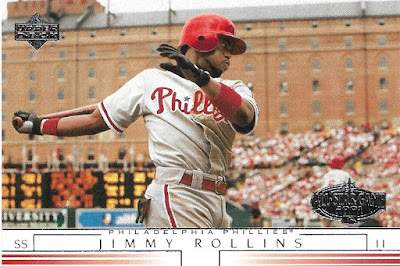 UPPER DECK BASE CARDS:
This was a biggie. CardBarrel had just gotten a huge shipment of 90s-00s Upper Deck base sets, spanning most of the run. So I had to go back through the sets I was both familiar with and had busted boxes of in college in order to find stuff that was new to me. Some, like this BEAUTIFUL Jimmy Rollins in Baltimore, stood out to me immediately. 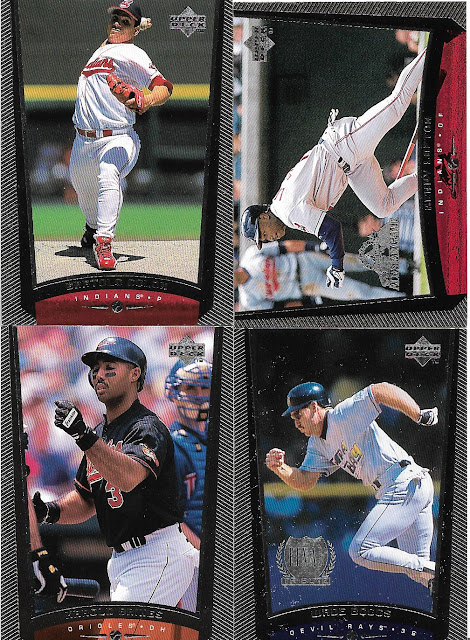 1999 UD: This one I'd nabbed some from CB before [back in the JustCommons days], but the refresh brought some new stuff as well, like more Colons and Loftons, and these late-career issues from Harold Baines and Wade Boggs. 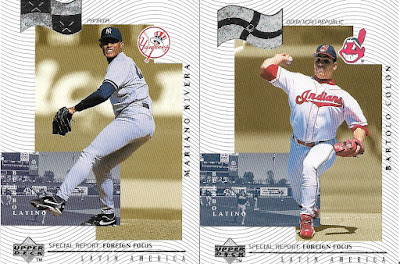 The 99s even included a subset or two, like this Foreign Focus one giving us Panama's Mariano Rivera and Dominican Bartolo Colon. All for cool, international-centric subsets, as you'll see. 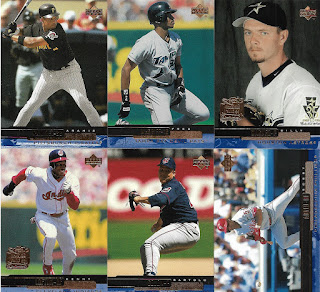 2000 UD: Another one I don't have a ton of, so my usual suspects [McGriff, Lofton, Colon] show up here as well. Kind of a transitional set, from the bulkier sets of the 90s to the crisper, cleaner ones of the early 2000s. 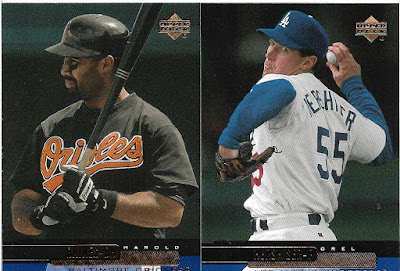 These two really struck me. Potential final releases for HOFer Harold Baines and...guy I enjoy collecting Orel Hershiser. Cool to see them both in this set. 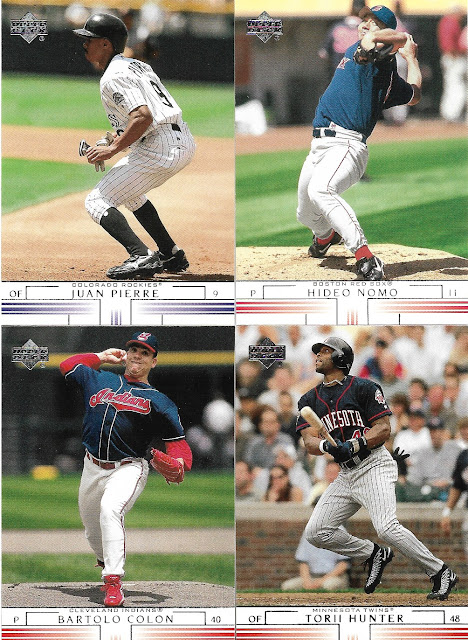 2002 UD: Mostly collected stuff from Series 1, cause 2 was the one I broke. Hideo Nomo in Boston is the coolest sight here. 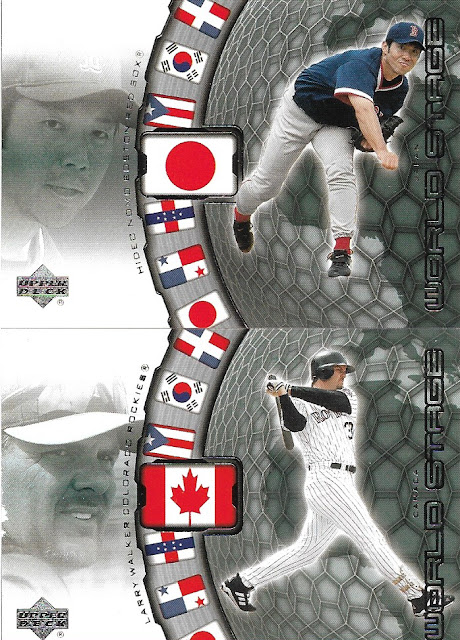 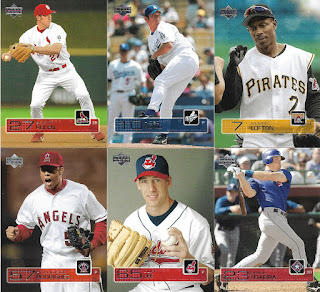 2003 UD: Most of these were taken from Series 2, cause 1 was the one I busted. Good to see some presence from the younger players from that season, as well as some vets, and a rare Pirates Kenny Lofton card. 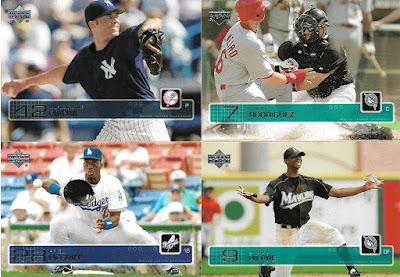 Four horizontals. Rivera I was shocked to nab at a low price. McGriff and Pierre look awesome from this dimension. 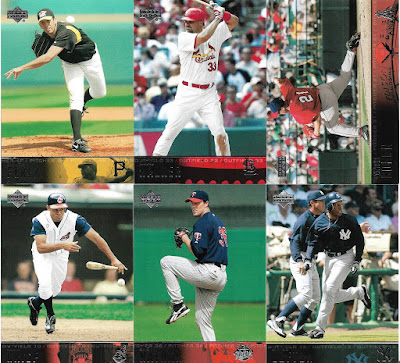 2004 UD: The last of these they had a ton of. More usual suspects [Colon, Lofton, Oliver Perez], but a Cardinals Larry Walker card, and early closer Joe Nathan. 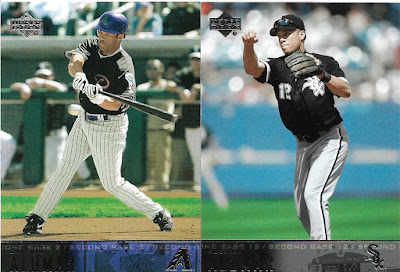 The best part of there being an onslaught of 2004 Upper Deck is that I could get both Roberto Alomar cards, each depicting him at a different stage of the final season of his career, in Arizona or in Chicago. Impressive stuff. 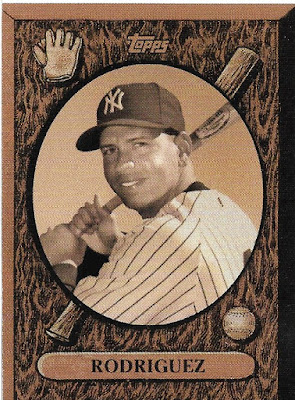 Set Needs:
This 2008 Trading Card History one of J-Lo's weeping ex-husband brings my search for that 75-card insert set from 2008 Topps down to three cards- that elusive Mickey Mantle card, Joey Votto's rookie, and, of course, Derek Jeter. I've been chasing this one since I started collecting, and it feels good to bring home another one. 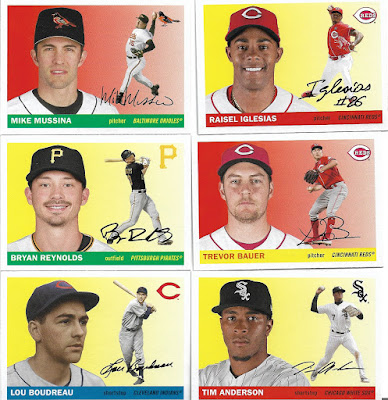 I also knocked off a bunch of 2020 Archives needs, a set made harder to chase by its exclusion from retail shelves. These commons from 55 continued the chase, even if the larger ones are gonna be tricky. 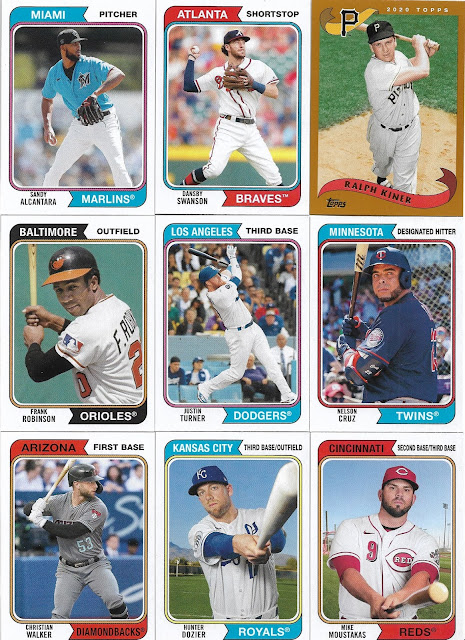 74s. Mostly basic photography here, though Frank Robinson's is awesome. Kiner's is grouped in here cause Topps gave him 2 cards in this set and hoped we wouldn't notice. 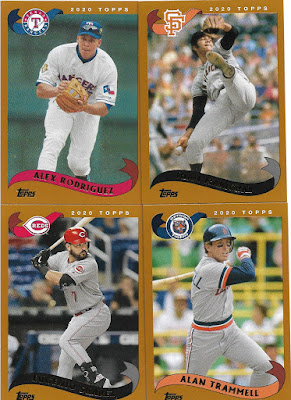 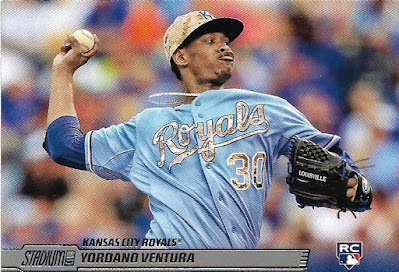 A rookie card of 2015 World Series champ Yordano Ventura brings my chase to complete the 2014 Stadium Club set down to ten cards, which is pretty huge. 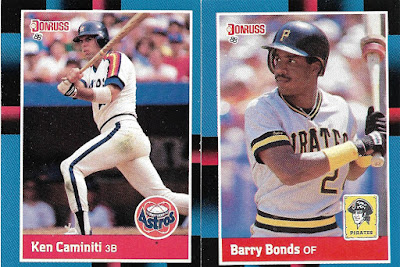 And these two big pieces of the 1988 Donruss set bring my set endeavor down to just four cards- Roberto Alomar and Al Leiter's rookie cards, Jose Canseco, and Matt Williams' rookie card. Again, big pieces to go, but not undoable.
So yeah, that was a really productive CardBarrel order, and I'm glad I was able to snag a lot of nice 00s DK and UD stuff. Might wait it out til I do another one, but I did get a lot out of this one.
Posted by Jordan at 10:16 AM