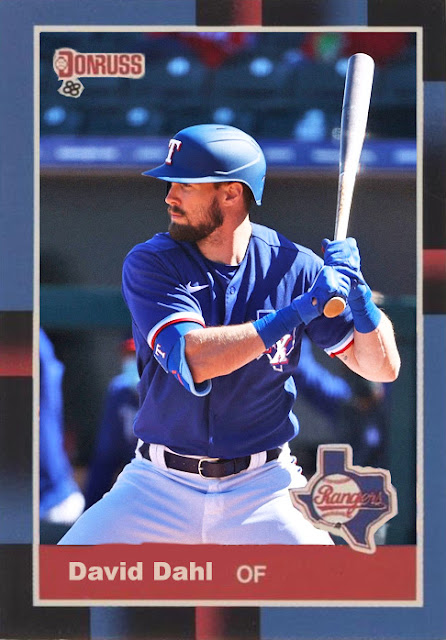 This week, Rougned Odor, who was one of the faces of the Texas Rangers for 6 seasons, was traded to the New York Yankees for some strange reason. The Yankees intend to use the now-beardless, strikeout-prone hitter as a utility infielder and a backup for D.J. LeMahieu. Hopefully he will take after Jay Bruce and learn to start hitting again.

But this, and the departures of Shin-Soo Choo, Lance Lynn and Elvis Andrus, leave the Rangers without much of an identity. They have a marquee star in Joey Gallo, but he's only really had one or two good years. There's no real ace, only one man in the lineup is over 30 [Brock Holt], 2 rookies have starting positions and only 4 players who came up through the team.

And yet there have been some intriguing things going on in the first week of play. Right now, the biggest crowd-pleasers are a couple of guys pinched from other teams- Nate Lowe, former Rays infielder, has the highest average of anyone right now, and already has 3 homers; Nick Solak, former Yankee farmhand, has already stolen 2 bases; and David Dahl has been a contact success away from Colorado with 7 hits and an RBI already. They may not be where they wanted to ease into in the bigs, but they're helping the Rangers forge a new identity. Kiner-Falefa, Trevino and Gallo are more of the homegrown faces, but Dahl, Solak, Lowe and Dane Dunning are proof that the GM is capable of spinning contracts for up-and-coming stars.

The pitching is a little scarier, though. Kyle Gibson was thankfully able to have a lights-out start today, but his first start consisted of him retiring only one batter and giving up 5 earned runs. Kohei Arihara is an alright pitcher who relies less on strikeouts and more on leverage, but his early ERA is shaky. And the Mike Foltynewicz experiment isn't going to work unless he figures out how to stop opposing offenses. The bullpen also has a few guys stinking it up right now, but hopefully after a few more series things will even out.

The Rangers aren't looking to be especially competitive this year, especially with a roster of rejects from other teams, but they're figuring out what to emphasize and how to get by. And taking a few games away from the Blue Jays is a nice start.

Coming Tonight: The rare pitcher who's allergic to Atlanta, and needed San Francisco to replenish his former numbers.