We are just getting to the tip of 200 right at the end of April, as far as this mega-set I made is concerned. By the end of May, we'll have hit #275. Which means I feel like we'll get to the end of this set by June. If you've been enjoying this set, which I sincerely hope you have, that would be a bad thing.

Still, here are the next 9 cards in the set. 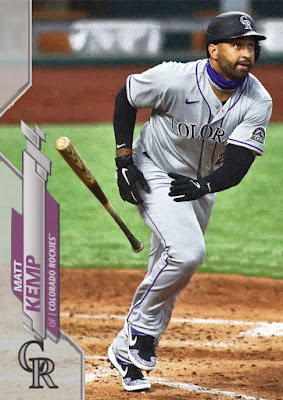 Card #190- Matt Kemp, Colorado Rockies
I am guessing that 2020 will end up having been Matt Kemp's final season, and at the very least it is a more dignified way of going out than his 2019 season, where he was bounced after 20 games with the Reds. Here, the Rockies picked up Kemp after the Marlins had cut him prior to the season, and Kemp acted as the Rockies' primary DH during their only season [to date] with the NL utilizing a DH. In 43 games, Kemp hit .239 with 21 RBIs and 6 homers, which wasn't BAD per se, but it wasn't anywhere above replacement level. To that, no MLB teams bit on Kemp for the 2021 season, so unless he has a late audition somewhere, this would have been his last issue. And Topps, with its schedules as they were, didn't get to it. 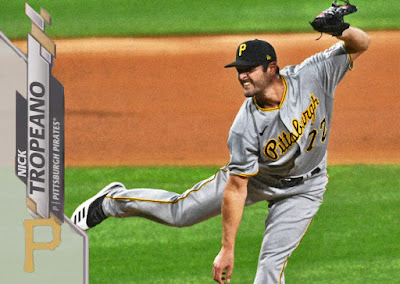 Card #191- Nick Tropeano, Pittsburgh Pirates
Nick Tropeano was a starting success for the Angels in 2018, which made the diminishing returns of his starter numbers a little heartbreaking. However, as Tropeano missed camp with the Yankees in 2020, the Pirates had some room in the bullpen, and Tropeano couldn't pass down an opportunity. Sure enough, Tropeano was one of the best pitchers on the roster for the Bucs last year, with a 1.15 ERA in 7 appearances with 19 Ks. Note that Tropeano was used as a long-man in this period, which was close enough to starting, I guess. Tropeano tried to make camp with the Giants this season, but hasn't made the team quite yet. 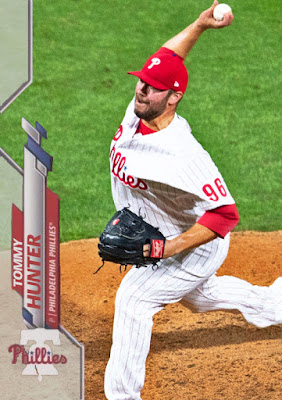 Card #192- Tommy Hunter, Philadelphia Phillies
Tommy Hunter had been a mainstay in the Phillies bullpen for a few years, and after only pitching in 5 games during 2019, made a comeback in 24 games in 2020. His 4.01 ERA and 25 Ks may not look like much, but considering the dire state of the Phils bullpen that year, Hunter was one of the few consistently not-terrible performers, and brought stability to a 'pen that had anything but. Hunter is currently signed to a minor league deal with the Mets and has not made the team yet. 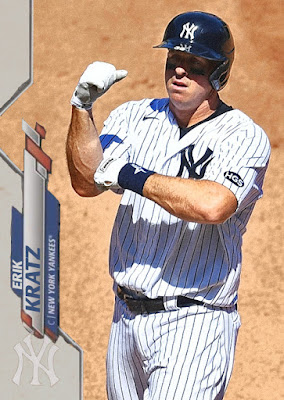 Card #193- Erik Kratz, New York Yankees
Erik Kratz was one of the premier backup catchers of the 2010s. After coming up with Philly as a backup for Carlos Ruiz, Kratz became a journeyman with EVERYONE, becoming a mainstream favorite as a backup catcher with the 2018 Brewers, and splitting 2019 with the Giants and Rays. He was never a huge offensive force, but he was durable and lovable. 2020, he was brought on as a backup catcher during Gary Sanchez' injury stretch in New York, and did surprisingly really well. He hit .321 with 9 hits and 4 RBIs, which is some of the most impressive performances by a catcher during the 2020 Yankees season. Kratz hung it up after the season, though, but not without a lot of Yankee fans being thankful for his work. 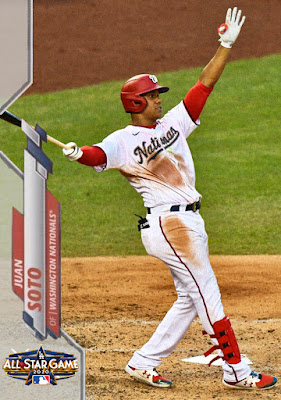 Card #194- Juan Soto ASG, Washington Nationals
It should not be much of a shock when I reveal that Juan Soto would have been a starting outfielder if the 2020 All Star Game had happened. He was coming off a HUGE 2019 and a monster postseason, and had some pretty impressive 2020 numbers despite missing some time to injury. Soto is currently injured, but he was hitting .300 so far this season, so I don't even think THAT will stop this guy from continuing to dominate the majors. 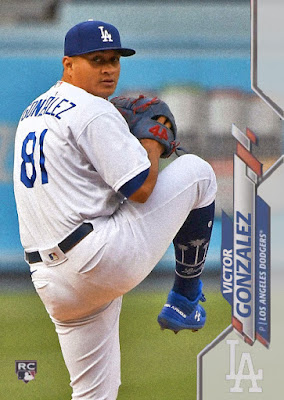 Card #195- Victor Gonzalez, Los Angeles Dodgers
The 2020 Dodgers bullpen comes down to two rookies- Brusdar Graterol and Victor Gonzalez. Gonzalez had been in the Dodgers' system for 7 years, and finally made the majors at 24 last year, becoming a relief favorite by just...not really allowing many runs at all. In 15 games, he had a 1.33 ERA with 23 Ks, and a 2.70 postseason ERA with 5 Ks. Gonzalez was a very stable, impressive relief option for a World Series team during his rookie season. Tomorrow the world. Right now he has a 2.57 ERA. 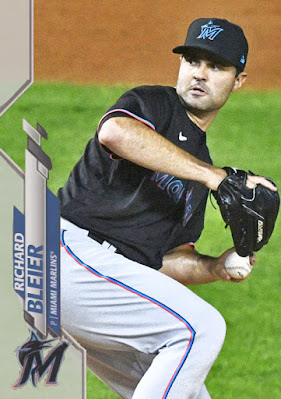 Card #196- Richard Bleier, Miami Marlins
I've talked during this project about the number of relievers that were summoned to Miami due to several of their relievers coming down with COVID at once. Brian Moran and James Hoyt I've already talked about, but the other big one was former Orioles reliever Richard Bleier. Bleier actually pitched in 2 games for the Os in 2020, and Topps covered that, but once he got traded to the Marlins, he was in similarly high demand. In 19 games, he had a 2.63 ERA, which wasn't bad at all. He also has a 0 ERA in 2 innings of postseason play. Bleier is waiting for his 2021 numbers to go down, but he's still on similar workload duty in Miami. 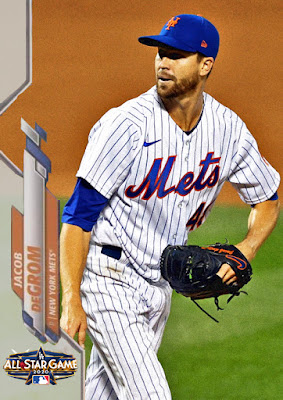 Card #197- Jacob De Grom ASG, New York Mets
Due to Yu Darvish's strong start, I don't think Jacob de Grom would have started the 2020 ASG for the National League, but can you imagine an ASG without him at this point? De Grom is one of the best pitchers in baseball right now, he's practically unhittable, and even if he has no run support, he is still incredible in big-game scenarios. He'll probably be starting this one anyway. 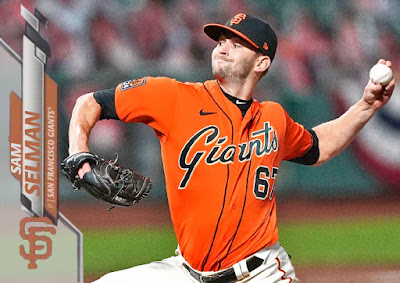 After a 10-game come-up in 2019, Sam Selman was able to be utilized a bit more regularly in 2020, becoming one of the more consistent relievers of the Giants' pen. Selman was a well-relied-upon mop-up man, finishing 8 games, and having a 3.72 ERA with 23 Ks in 24 games. Selman was only recently promoted back to the Giants, so hopefully you'll see some similar numbers from him in 2021.

Monday, you get to see who got to be card #200, as well as some decent rookies.